The biotech announced good news. But investors could be worried about external factors.

Shares of Novavax (NVAX -7.50%) were sinking 12.5% lower as of 3:32 p.m. EST on Monday. The biotech announced that it has completed enrollment of a late-stage study of COVID-19 vaccine NVX-CoV2373 in the U.S. and Mexico. That's good news, so why did the stock fall? There are two likely reasons.

First, the overall stock market declined on Monday. High-flying stocks like Novavax tend to drop more than the overall market does on a down day. Second, some investors could be concerned that a potential U.S. Emergency Use Authorization (EUA) later this week for Johnson & Johnson's (JNJ 0.70%) COVID-19 vaccine could limit Novavax's opportunities. 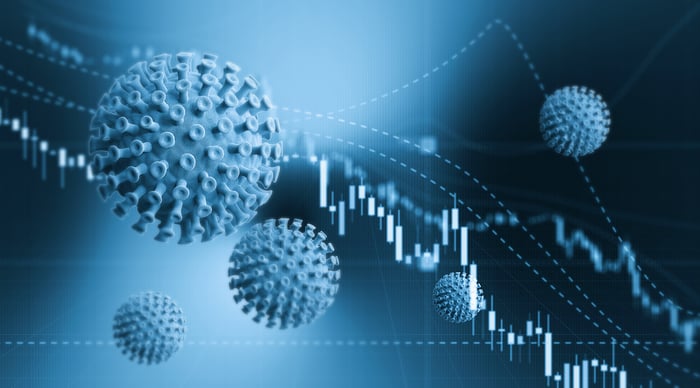 Clinical-stage biotech stocks like Novavax are usually volatile. It's not surprising that the company's shares would fall on a day when the Nasdaq Composite Index slid nearly 2% lower. The best thing for investors to do is ignore the noise when this happens.

What about the potential that J&J could win EUA for its vaccine and hurt Novavax's prospects? The chances for the big healthcare company to receive a positive recommendation from the U.S. Food and Drug Administration (FDA) advisory committee on Thursday appear to be good. J&J also should be in a strong position to get a thumbs-up from the FDA following the committee's vote.

However, good news for J&J doesn't necessarily translate to bad news for Novavax. Today's report that enrollment completed in Novavax's late-stage study in the U.S. and Mexico should mean that results will be available relatively soon. If those results are as positive as Novavax's U.K. study data, the biotech should also be on track to secure EUA for its COVID-19 vaccine in the United States. Novavax already has a supply deal with the U.S. government for 100 million doses.

Several regulatory agencies, including the European Medicines Agency and the U.K. Medicines and Healthcare products Regulatory Agency, have already begun a rolling review process for authorization of NVX-CoV2373. The main thing to watch with Novavax over the short term is the potential for the company's COVID-19 vaccine to secure EUA from one or more of these regulatory agencies.