These companies are being propelled by long-term tailwinds.

One method that many investors use as they attempt to find suitable stocks to hold for the long term is to look first for broad, powerful trends -- the kind that have the potential to endure for years or even decades. Identifying them is not always a simple task, but businesses that successfully position themselves to ride such tailwinds can enjoy long stretches of growth in both revenue and net income.

In the past year, the already-strong trends toward digitalization, e-commerce, and online payments were significantly accelerated by the social-distancing measures the pandemic demanded. Those changes, in turn, led to more rapid growth in data usage.

All of these tailwinds will be further intensified by the heavy investment that is happening in 5G networks and better smartphone technology, which will allow a greater number of businesses to deliver their services via the cloud.

If you're an investor in search of companies that will profit from these catalysts, here are three stocks that you should consider buying and holding for at least a decade. 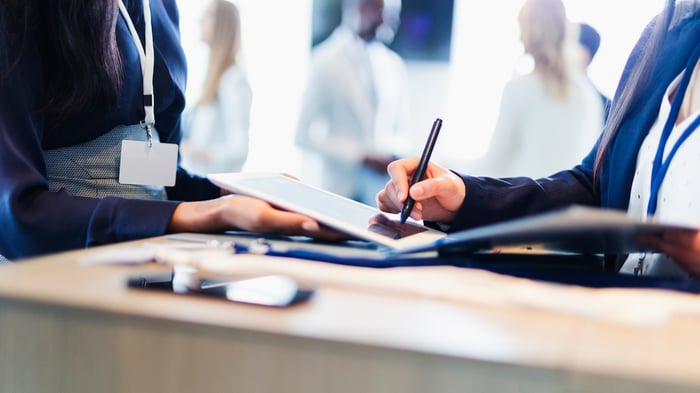 Adobe Systems (ADBE 1.92%) has come a long way since the days when it was best known as the inventor of the portable document format (PDF). The technology company now has three main product suites -- Creative Cloud, Document Cloud, and Experience Cloud. These offer a wide range of services, from graphics design and photo processing software to artificial-intelligence-driven solutions for marketing or customer analytics to digital signatures for documents.

Despite the pandemic, Adobe reported record earnings for its fourth quarter and its full year. In 2020, revenue rose 15.2% to $12.9 billion -- and 90% of that revenue came from recurring subscriptions, up from 86.2% the year before. Operating income climbed nearly 30% year over year to $4.2 billion, while net income jumped 78.2%, boosted by an income tax benefit of $1.1 billion.

Adobe believes that the societal shift toward all things digital will continue in 2021 and beyond. To illustrate that thesis, management pointed to examples such as the growth in demand for experiences rather than products and the surge in e-commerce spending. The total addressable market for Adobe's services is forecast to hit around $147 billion by 2023, providing the business with ample long-term growth opportunities.

Acting as an effective middleman between merchants and consumers is PayPal (PYPL 0.80%). The company rode on a wave of e-commerce growth to post its best full-year performance ever in 2020. Revenue climbed 21% to $21.5 billion while net income soared 71% to $4.2 billion. Free cash flow generation remained solid at $5 billion for the year, giving the digital payments powerhouse a free cash flow margin of 23%.

CEO Dan Schulman commented that the digitalization of numerous businesses last year has allowed his company to deliver remarkable performance, and noted that PayPal released more products in 2020 than in prior years. These efforts have had an impact on its performance. The company added 72.7 million net new active accounts during the year, almost doubling 2019's additions, while total payment volume (TPV) rose 31% to $936 billion. During its recent Investor Day, Schulman said he was contemplating new revenue streams that would propel PayPal's active accounts to 750 million by 2025. As of the end of 2020, the number of active accounts stood at 377 million.

The company continues to improve its service offerings. For example, it now allows customers to utilize PayPal and Venmo QR codes to securely pay for items at selected merchants without any physical contact, a valuable feature as the pandemic continues to rage across the U.S. The company expects last year's strong momentum to continue in 2021, with TPV forecast to grow in the range of 25% to 29%, accompanied by the addition of an estimated 50 million net new active accounts.

If you're looking for a company poised to take advantage of e-commerce growth in Asia, then look no further than Sea Limited (SE -3.02%). This consumer internet company founded in Singapore has three core divisions -- e-commerce (Shopee), online gaming (Garena), and digital payments (SeaMoney). Its share price has soared more than 18-fold since its IPO at $15 a share in 2017.

Both e-commerce and online gaming saw phenomenal growth as more people hunkered down at home and spent their time and money on the internet. Sea's e-commerce revenue surged by 173.3% in 2020 to $618.7 million, with gross merchandise value doubling to $9.3 billion. Shopee is the largest e-commerce platform in Indonesia, the world's fourth-most-populous nation. It saw 310 million orders logged in the third quarter, up over 124% year over year.

Sea's Garena gaming division saw a similar increase in demand in Q3, with paying users more than doubling year over year to 65.3 million. Revenue for this segment rose 73% year over year to $569 million as its hit title Free Fire remained the highest-grossing mobile game in Latin America and Southeast Asia. Sea's growth momentum looks steady thanks to its strong hold on both e-commerce and digital entertainment in Asian markets, and the company looks poised to continue posting stellar numbers.