Please ensure Javascript is enabled for purposes of website accessibility
Log In Help Join The Motley Fool
Free Article Join Over 1 Million Premium Members And Get More In-Depth Stock Guidance and Research
By James Brumley - Feb 23, 2021 at 10:41AM

The king of online shopping is showing fresh interest in a business it's already abandoned. Take the hint.

If a recent deal is any indication, e-commerce behemoth Amazon (AMZN 0.19%) is looking beyond its own online platform for growth. Australian-based Selz quietly reported last month that it's signed an agreement to sell itself to the online shopping giant. Selz helps small companies establish and manage their own e-commerce presence, a la Shopify (SHOP 8.52%) or BigCommerce (BIGC 8.23%).

It's a curious move for several reasons, chief of which is the fact that Amazon previously offered its own suite of tools called Webstore. That home-grown service was shuttered in 2016. The fact that it's now changing its mind with the purchase of an existing platform is telling, to say the least. It says there's something to the idea that vendors want more control of their sales process, rather than being part of a massive mix of competition at Amazon.com. 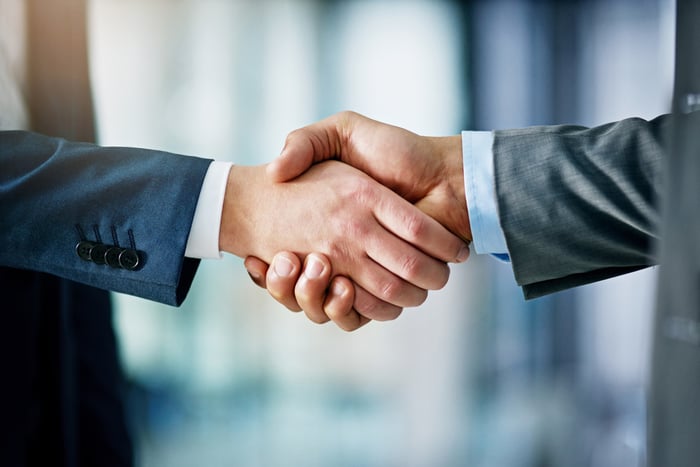 In many ways, it's the inevitable evolution of e-commerce.

At one point Amazon.com was the only way for many sellers to connect with enough online shoppers to achieve viability. Now, however, consumers and companies are both web-savvy and don't necessarily need an intermediary like Amazon. To this end, Digital Commerce 360 estimates that Amazon's 2020 share of e-commerce spending in the U.S. clocked in at a healthy 31.4%, though that's down from 2019's proportion of 43.8%.

Yes, the pandemic played a role in this shift, and big players like Walmart (WMT -2.74%) and Target quickly revved their e-commerce engines when the opportunity arose. But the COVID-19 contagion also accelerated the existing growth of direct-to-consumer (DTC) sales following years of complaints from Amazon's third-party sellers that suggested Amazon itself competes unfairly with its sellers.

Many of the names that dropped Amazon.com are doing well with their own e-commerce operations too. Take Nike (NKE -2.68%), for instance. A year ago it stopped using Amazon as a sales platform, opting to develop its own e-commerce apparatus. For the quarter ending in November of last year, the company's digital sales were up 80% year over year. In the same vein, BigCommerce's top line is up 35% through the first three quarters of last year. Shopify just reported fourth-quarter results that translate into 2020 sales growth of 86%.

These are numbers Amazon can't afford to ignore, so it isn't. The acquisition of DTC-support name Selz says as much.

While the reasoning behind such a deal is clear, the reason Amazon specifically selected Selz isn't.

The company isn't publicly traded, and as such doesn't disclose its fiscal results. Amazon has said nothing about the acquisition either, other than to confirm it. However, given its relative obscurity, it's not a stretch to assume Selz isn't as big as market-leader Shopify, or perhaps even as big as its smaller rival BigCommerce. The two publicly traded entities sport market caps of $169 billion and $5 billion, respectively.

The latter is obviously the more affordable of the two to a suitor, although Amazon hasn't exactly been shy about spending big in the past to procure properties it's really, really wanted. Rather, the relatively limited deal with Selz suggests Amazon is more interested in Selz's technology than in its existing customer base, and it is perhaps looking to run a cheap experiment in the arena before it makes a bigger investment (up to and including a bigger acquisition down the road).

The reasoning is mostly irrelevant at this point. Amazon is interested in supporting online merchants outside of its flagship sales platform again, suggesting the online-DTC business model is enough of a threat that the giant either has to embrace it or combat it. It's embracing it, even if only half-heartedly for the time being. This embrace speaks volumes about the potential of BigCommerce and Shopify, and at least partially positions them as acquisition candidates.

Buying into a company because it's a potential acquisition target is a lousy lone reason to own a stock, by the way. Far more buyouts have been predicted than have actually panned out. Amazon could easily decide to maintain the status quo of its current partnership with Shopify, which allows Shopify's client companies to accept "Pay with Amazon" payments from customers. Shopify can also be used to tap Amazon to fulfill online orders when the need arises, or even manage multiple online stores including Amazon listings.

But read between the lines. Walmart also partnered with Shopify last year in an effort to introduce more third-party goods at Walmart.com. Major brands like Gillette and Ben & Jerry's are using BigCommerce to manage their e-commerce stores in-house.

These seemingly minor nuances add up in a big way, pointing the web-based shopping industry in a new kind of direction. That is, with a choice now available, more and more merchants are looking for self-managed solutions, and are less interested in relying on difficult third-party silos such as Amazon.

The clincher: A recent McKinsey survey indicates only 60% of consumer goods companies even feel remotely ready to respond to the clear rise of DTC. Where do you think these companies are going to turn for easy answers?