The health food company is gearing up for a massive market debut.

Oatly filed a document for an initial public offering (IPO) with the Securities and Exchange Committee on Tuesday. The oat milk company did not outline how many shares it would sell or what pricing range the stock might debut at, but a report from Bloomberg said shares could be priced to value the company at $10 billion.

The market for IPOs has been incredibly hot as of late. More companies went public on U.S. exchanges than ever before last year, and 2021 will see more big names make their market debuts. A market cap in the $10 billion range would immediately make Oatly one of the most valuable pure-play stocks in the health food space, and there are reasons why investors may be willing to embrace a growth-dependent valuation. 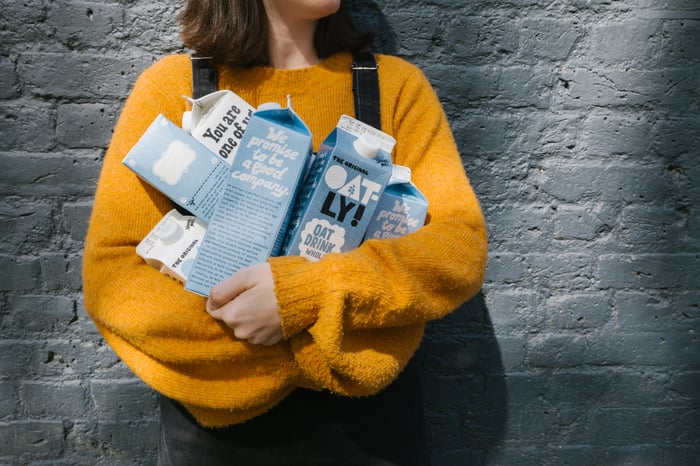 Consumer preferences are shifting toward healthier options, and Oatly is building a strong brand and attracting investment and support from powerful allies. The company has received backing from Oprah Winfrey, Natalie Portman, and former Starbucks CEO Howard Schultz.

Oat milk is a booming product category, with sales in the U.S. more than quadrupling to reach $213 million last year, and Oatly is the fastest-growing brand in the category. In addition to milk, the company also makes oat-based yogurt, cheese, and lattes. Blackstone Group (BX 2.86%) led a $200 million private funding round for Oatly in July and noted that Oatly's products were available at more than 50,000 locations across 20 different countries.

The company aims to lead a shift away from animal-based protein consumption in favor of plant-derived alternatives. Demand for meat and dairy alternatives and healthier foods has been rising, but investors should approach the upcoming IPO with the understanding that the business's outlook remains somewhat speculative.