Please ensure Javascript is enabled for purposes of website accessibility
Log In Help Join The Motley Fool
Free Article Join Over 1 Million Premium Members And Get More In-Depth Stock Guidance and Research
By Rekha Khandelwal - Feb 24, 2021 at 7:46AM

The Chinese solar panel manufacturer has grown rapidly in the last few years. But can it sustain that growth?

Leading solar panel manufacturer JinkoSolar's (JKS 8.37%) stock surged 158% in 2020, performing slightly better than top peer Canadian Solar (CSIQ 7.99%). Both solar stocks have significantly outperformed First Solar (FSLR 4.64%) stock during this timeframe. However, can JinkoSolar continue its outperformance in the years to come? Let's see if its stock is still a buy after its recent outperformance.

JinkoSolar is one of the world's largest solar panel manufacturers. It has seven production facilities in China, and one each in the U.S. and Malaysia. Having bulk of the production in China gives the company an edge in terms of lower production costs compared to its U.S.-based peers.  The company's sales are globally diversified. While the geographical break up of 2020 sales are yet to be reported, we can get an idea of JinkoSolar's sales diversity from the previous year. Only about 18% of total revenue in 2019 came from its domestic China market -- meaning 82% of sales generated were in overseas markets. One-fourth of the company's revenue came from North America, while Europe accounted for around 18%, whereas the Asia Pacific region accounted for roughly 25% of 2019 sales.

JinkoSolar has grown its sales rapidly over the years. The company's sales growth rate exceeds that of its peers Canadian Solar and First Solar. In the last ten years, JinkoSolar grew its sales by average 26.7%. 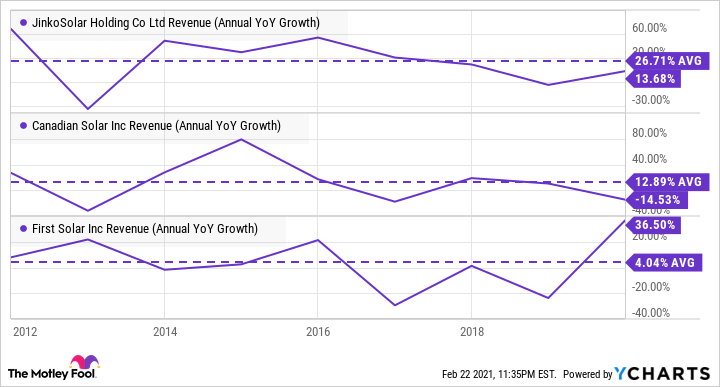 Thanks to the steady growth over the years, JinkoSolar's revenue now exceeds that of its peers. However, JinkoSolar has been generating a lower margin on its sales. This has also likely put margin pressure on its peers. 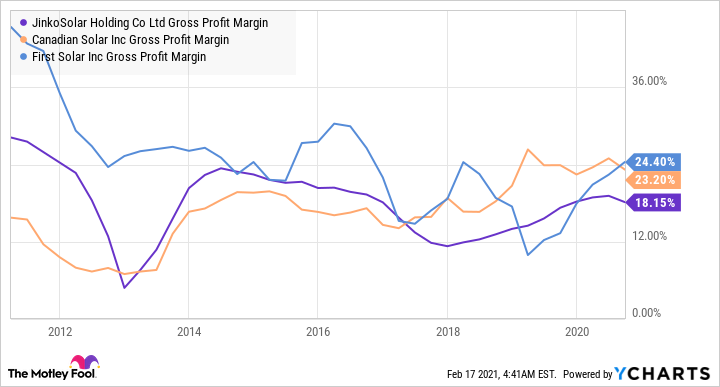 Nevertheless, JinkoSolar's strategy to expand sales -- even at a slightly lower margin -- may bode well for it. The company claims to have increased its global market share from 12% in 2019 to 15% in 2020.  JinkoSolar looks well placed to continue its growth in the coming years, thanks to the robust expected demand for solar power. Policy support for solar from major economies, including the U.S. and China, provide tailwinds for solar industry's growth.

Why JinkoSolar trades at a cheaper valuation

Even after JinkoSolar stock's recent rise, it trades at a price-to-sales ratio below one. Its ratio is lower compared to both Canadian Solar and First Solar. 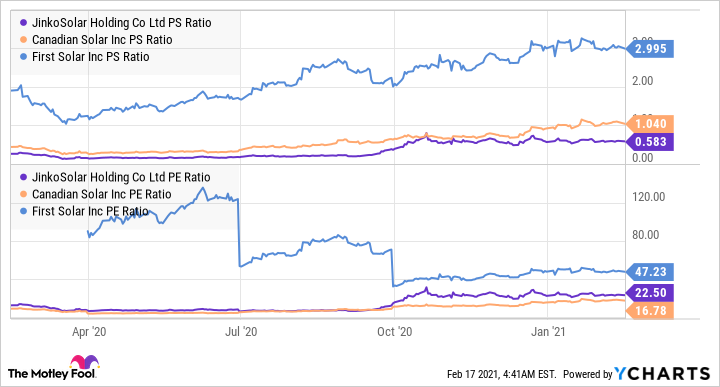 Similarly, JinkoSolar's price-to-earnings ratio of 23 is much lower than First Solar's ratio of 47, though it's higher compared to Canadian Solar's. JinkoSolar is not only growing at a faster pace, but is also trading more cheaply compared to its peers. That makes it attractive. But before jumping in, it's important to understand some of the key risks associated with the stock.

JinkoSolar has a production facility in the Xinjiang region of China, which has recently been under scrutiny for alleged forced labor. Though JinkoSolar dismissed the idea of any forced labor at its facility, the company reportedly moved its planned shipments to the U.S. outside of Xinjiang.

Other risks are more general, associated with all investments in China, including less stringent disclosure requirements, looser accounting standards, and regulatory differences. Because of the above risks, JinkoSolar stock may continue to trade at a discount compared to its U.S.-based peers. 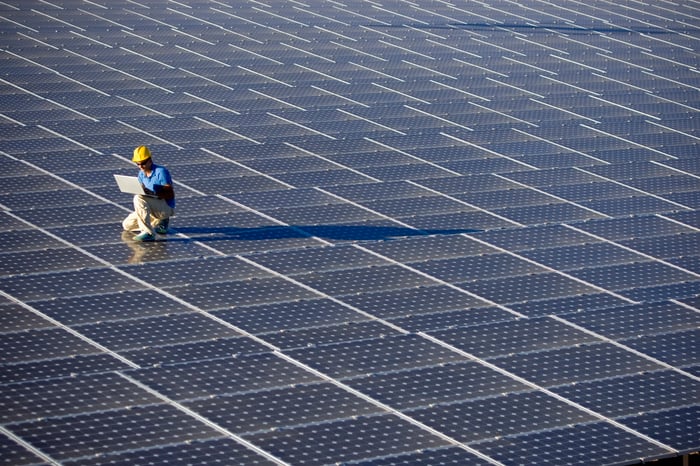 Though the above-mentioned risks make JinkoSolar appear risky, it may actually not be that risky. The company's Xinjiang facility produces silicon ingots, which are used to make solar modules. JinkoSolar has two more facilities -- in Jiangxi and Sichuan -- that manufactures ingots. If North America restricts imports from Xinjiang, the company can still make up for the demand from its other facilities.

JinkoSolar's higher revenue growth than peers has contributed to the rise in its market share. It now boasts revenue higher than its top peers. The company's cost advantage allows it to offer products at competitive pricing, boosting sales volumes.

All in all, even if the valuation gap with its peers remains, steady growth in JinkoSolar's earnings should result in a comparable rise in the stock's price. That makes JinkoSolar stock an attractive buy right now.