Spotify's Stream On event gave investors a glimpse at its broader podcasting plans.

Spotify's (SPOT 4.00%) Stream On event this week gave investors a peek into the company's plans to continue building its podcast business. Along with new content partnerships, the audio-streaming specialist shared details for new ad technology and podcast creator tools. All three areas are key building blocks in Spotify's podcasting strategy, and they provide meaningful potential for operating leverage and margin expansion.

Spotify now counts over 2.2 million podcasts on its platform, but only a few dozen really draw listeners to the service. Spotify has made some big investments in original and exclusive podcasts to get users to use its player instead of the competition, and to a large degree it works. Management says it saw an uptick in user additions, first-time podcast listeners, and engagement when The Joe Rogan Experience became an exclusive in December. 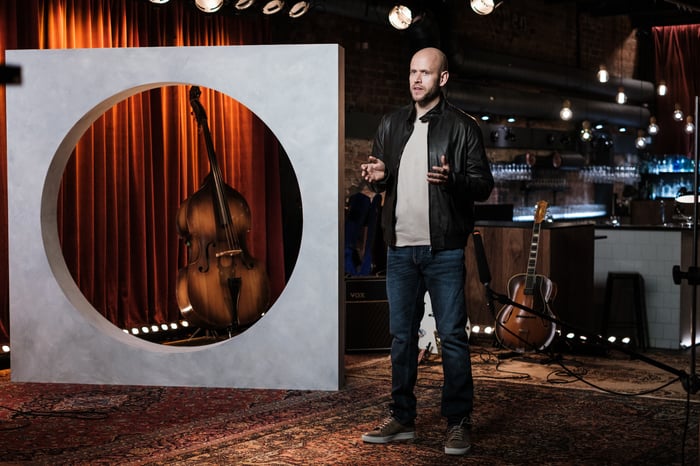 To that end, it announced several new high-profile names it's adding to its podcast lineup, including former President Barack Obama, Bruce Springsteen, Ava DuVernay, and the Russo brothers. It also revealed new podcasts from Barack and Michelle Obama's Higher Ground production company, and gave investors a look at the first podcast from its DC Comics partnership.

There's still a lot of room for Spotify to increase podcast adoption on its platform. As of the end of 2020, 25% of listeners engaged with podcasts on Spotify.

What's more, if those marquee titles are designed to get users to try podcasts, Spotify's newly announced recommendation tools are designed to get them to keep listening. With a growing library of hundreds of thousands of titles, Spotify has an opportunity to capitalize on the long tail of podcasts on its platform through its ability to recommend content based on everything it knows about its users. That's a big advantage over competing podcast players.

Spotify is making it easier to buy ads across its entire platform with the introduction of the Spotify Ad Network. Marketers will be able to use Spotify's ad tools to run a campaign that reaches listeners of Spotify's own originals and exclusives, third-party podcasts hosted on Megaphone or Anchor, and its ad-supported music.

Spotify already has a large number of advertisers for its ad-supported music service. Being able to easily migrate them to podcast ad buying should improve the direct monetization of its own podcasts while increasing the number of ad offers for its monetization tools in Megaphone and Anchor. That could help attract more creators to those platforms.

In a move to further increase ad demand in podcasts, Spotify also announced the ability to buy podcast ads through its self-serve platform. The idea is to make purchasing podcast advertisements as easy as buying ads for its core music offering.

Additionally, Spotify confirmed its plans to enable its streaming ad insertion technology on all Megaphone-hosted podcasts sometime this year.

Spotify also showed off some new tools it's working on to give creators more ways to engage and monetize their podcast audiences.

It partnered with Wordpress to turn writers into podcasters and vice versa. It's also opening up video for more podcasters this year after testing it with a limited set of creators last year. Podcasters will also have the ability to interact with listeners through polls and Q&A sessions integrated into Spotify's Anchor podcast creation software.

The important factor in Spotify's podcast business is that content costs don't scale with revenue like they do in its music business. Spotify pays out a certain percentage of its revenue from music listening to labels, musicians, and songwriters.

With podcasts, Spotify can pay for an original or exclusive once and keep all the revenue, producing operating leverage if it can successfully draw an audience to the content. With plans for 1 billion global listeners, it's growing a large pool to draw an audience from for its podcasts.

Even more lucrative is the potential to act as a middleman between podcast creators, advertisers, and listeners. There Spotify can simply collect a fee and it has very low marginal costs once the technology is in place. It's a three-sided network Spotify's developing, and the announcements it made this week should help facilitate its growth with more podcast listening, more discovery, more podcast advertisers, and more third-party creators.