Please ensure Javascript is enabled for purposes of website accessibility
Log In Help Join The Motley Fool
Free Article Join Over 1 Million Premium Members And Get More In-Depth Stock Guidance and Research
By Beth McKenna - Feb 26, 2021 at 10:11AM

Beyond Meat stock seems poised to move higher on Friday, driven by news of a partnership with McDonald's and the parent company of KFC, Taco Bell, and Pizza Hut.

Beyond Meat's (BYND -2.64%) fourth-quarter results, released after the market close on Thursday, brought to mind a quarterly version of the '90s hit movie Groundhog Day, wherein Bill Murray's character relives the same day over and over.

Indeed, the leader in plant-based meat substitutes reported Q4 results that were a close replay of its Q3 results: anemic year-over-year revenue growth, with both the top and bottom lines falling short of Wall Street's consensus estimates.

The market's initial reaction, however, was wildly different. Shares closed down just 0.9% in Thursday's after-hours trading session. By contrast, last quarter, the stock plunged about 20% following the earnings release.

The main reason? Immediately after releasing its Q4 results, Beyond Meat announced that it had inked partnerships with the king of fast-food chains, McDonald's (MCD -1.44%), as well as another industry giant, Yum! Brands (YUM 0.16%), which owns KFC, Taco Bell, and Pizza Hut.

Let's dig into the Q4 results. 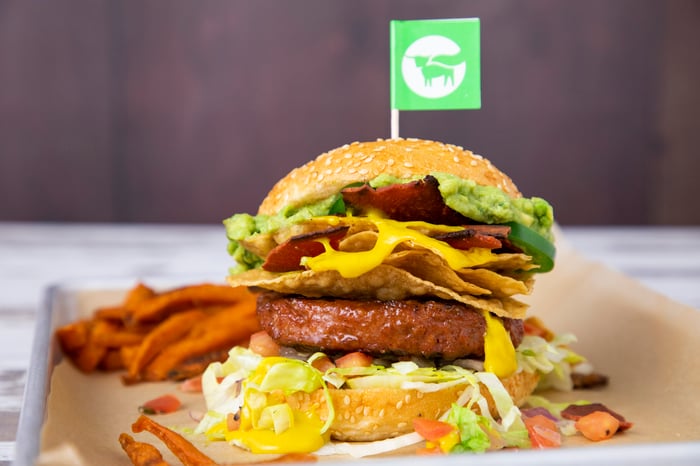 As with last quarter, revenue growth was driven by an increase in retail sales, which was largely offset by a decline in food-service sales due to the impact of the COVID-19 pandemic. Promotional activities intended to entice more new consumers to try Beyond Meat products also continued to hurt the top line.

For some context, last quarter, the U.S. segment's revenue rose 25% year over year. That's exactly the same as its Q4 performance, though the two components of the segment moved further in their respective opposite directions. In the third quarter, U.S. retail sales increased 41%, while U.S. food service sales fell 11% year over year.

Here's part of what CEO Ethan Brown had to say in the earnings release:

I am proud of our 2020 achievements in light of the significant challenges we faced, primarily in our foodservice channel, as a result of the COVID-19 pandemic. For the full year, we grew total net revenues 37%, with sales to retail customers more than doubling versus the prior year.

Another anemic quarter, but great news on the partnership front

Beyond Meat turned in a disappointing quarter. Granted, COVID-19 is hurting results. ... Nonetheless, people around the world needed to eat during the [fourth] quarter -- and Beyond Meat's top-line result suggests that management didn't do a great job at meeting consumers where they were at.

That said, long-term investors should keep in mind that one quarter is just one quarter, and doesn't make a trend. The company remains the leader in a food niche that has significant growth potential.

Of course, the new partnerships are great news. This news could help power the stock higher, at least over the short term.

As part of the three-year global agreement with McDonald's, Beyond Meat will be the fast-food titan's "preferred supplier for the patty in the McPlant, a new plant-based burger being tested in select McDonald's markets globally. In addition, Beyond Meat and McDonald's will explore co-developing other plant-based menu items -- like plant-based options for chicken, pork and egg," according to the press release. (Emphasis mine.)

As to the Yum! Brands partnership, the companies will "co-create and offer craveable and innovative plant-based protein menu items that can only be found at KFC, Pizza Hut and Taco Bell over the next several years."