Please ensure Javascript is enabled for purposes of website accessibility
Log In Help Join The Motley Fool
Free Article Join Over 1 Million Premium Members And Get More In-Depth Stock Guidance and Research
By Adria Cimino - Feb 26, 2021 at 6:57AM

The company is aiming for authorization and market share in a competitive market.

The coronavirus vaccine race didn't include Ocugen (OCGN 8.21%) a few months ago. And yet, recently, this biotech company leapt past rivals. The company is in talks with the U.S. Food and Drug Administration (FDA) regarding an Emergency Use Authorization (EUA) pathway for its candidate. All of a sudden, it looks like Ocugen is just steps away from the finish line.

As a result, Ocugen shares have soared more than 350% since the start of the year, and the company's market capitalization has grown to $1.56 billion from about $350 million in that period. So, with the possibility of a new coronavirus vaccine on the market in the U.S. -- should you buy shares of Ocugen? 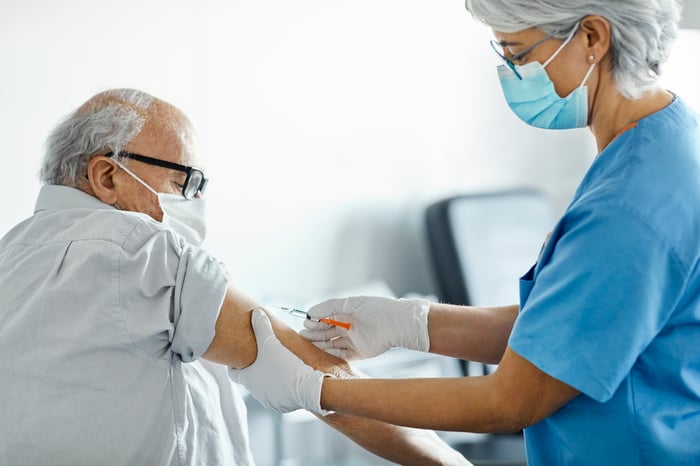 Earlier this month, Ocugen finalized a deal to codevelop and commercialize Covaxin in the U.S. The developer of Covaxin, Bharat Biotech, is now selling the product in its home country of India under emergency authorization. As part of the agreement between the two companies, Ocugen will keep 45% of Covaxin profits in the U.S.; Bharat will pocket the rest.

Vaccines against infectious diseases aren't Ocugen's usual business. The company specializes in gene therapies for eye diseases that cause blindness. The company has three such candidates in the pipeline for eight indications. The four most advanced programs, which are meant to treat genetic-mutation-associated retinal degeneration, will head into phase 1 studies next.

The decision to partner with Bharat on Covaxin is good news because it brings a closer-to-market product into the fold. And Ocugen has taken steps to assure a successful launch. The company put together a vaccine scientific advisory board including six experts from industry and academia. Ocugen also raised $23 million in a direct offering of shares to institutional investors. We can imagine funds from this operation supporting the advancement of Covaxin in the U.S.

It's too early to say whether Covaxin is a strong vaccine candidate; we'll have to see phase 3 data first. Bharat expects to generate results by March. Ocugen points out a positive detail, though: Covaxin has invoked an immune response to various viral proteins -- not just the spike protein that the virus uses to infect host cells. That gives Covaxin a better chance of beating new viral strains. As mutations transform the spike protein, vaccines focused on the spike only may lose efficacy.

The chances of success

Of course, at this point, the biggest risk is a negative or lackluster data report. But let's imagine that Covaxin's data readout is incredibly positive. Then what will Ocugen's chances of success be with this vaccine candidate under its belt?

A recent move by the Biden administration will make it difficult for most market newcomers -- at least this year. The government bought enough doses of the Pfizer (PFE 1.37%) and Moderna (MRNA 2.77%) vaccines to fully immunize the entire U.S. population. That leaves little room for new players in that market. The biggest problem right now for Ocugen is its deal with Bharat allows it to eventually sell Covaxin only in the U.S. -- and Pfizer and Moderna have deals in place with the federal government which allow them to supply enough vaccines to inoculate the entire population.

Vaccine developers haven't clearly said how often people will need to be vaccinated against COVID, but Moderna has offered a few clues. It's already said that its vaccine is likely to protect for a year or two. We can imagine that boosters will be necessary. The good news is that Ocugen may have a chance at market share once the population needs to be vaccinated more than once or on a regular basis.

But here's another point to keep in mind: For Ocugen to take market share from Moderna and Pfizer later on, it will have to offer an advantage. Otherwise, the government may continue to buy from its current suppliers. So Covaxin's performance against new strains will be crucial. Johnson & Johnson (JNJ 0.40%) and Novavax (NVAX 4.00%) have reported phase 3 data, and are seeking a share of the U.S. market as well. Covaxin must closely resemble (or beat) their candidates' performances, too.

All of this means it may be difficult for Ocugen to carve out a significant share of the U.S. market -- even down the road. And that means buying shares of Ocugen just for its coronavirus vaccine probably isn't a good idea.

But Covaxin could be positive for Ocugen in another way. If the vaccine candidate is able to gain even a small share of the U.S. market in the coming years, it would offer Ocugen a revenue source. And that revenue would help fund the rest of Ocugen's pipeline programs. If this scenario plays out, it may be worth giving this biotech a second look.

3 Moonshot Stocks With Upside of Up to 709%, According to Wall Street