Please ensure Javascript is enabled for purposes of website accessibility
Log In Help Join The Motley Fool
Free Article Join Over 1 Million Premium Members And Get More In-Depth Stock Guidance and Research
By Rick Munarriz - Feb 26, 2021 at 9:35AM

Missed connection with the online dating IPO? Opportunity is knocking on another chance at a meet-cute.

It's easy to see why Bumble (BMBL -0.56%) was a hot debutante two weeks ago. Online dating has never been as popular as it is right now with traditional social gatherings harder to come by in the new normal. Bumble happens to have the world's second and fourth highest-grossing dating apps in its portfolio, and its namesake app has a unique approach to pairing up its users.

Underwriters priced Bumble at $43, but it was too low. The stock opened at $76, trading as high as nearly $85 on its second day of trading. Missed connection? Not quite. The stock's been drifting lower lately, and Thursday's market sell-off was particularly hard on recent IPOs. Bumble shares tumbled nearly 7% on the day, hitting an all-time low of $61.70 in the process. You may want to make the most of your second chance to get the shares at a cheaper price than any post-IPO buyer. 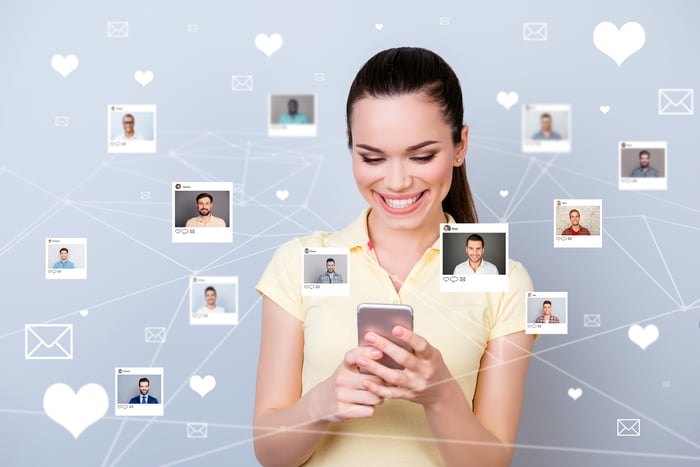 The growing popularity of online social and dating apps has propelled Match Group (MTCH) to market-thumping returns lately. Match Group -- the parent company behind several hookup platforms including Tinder, Hinge, and OkCupid -- has more than doubled since the start of last year and nearly tripled since the beginning of 2019.

The twist here is that Tinder has been the growth driver at Match Group in recent years, and Bumble CEO Whitney Wolfe Herd is a co-founder of that app. She moved on to start Bumble in 2014, giving women more say in the matchmaking.

Bumble is unique when it comes to pairing up men with women in that only women can initiate contact with the men on the site. The process makes it a safe space, and women haven't been shy about making the most of this Sadie Hawkins dance of dating apps. There have been 1.7 billion first moves -- the equivalent of a Tinder swipe -- since its inception.

The connections are legit. A whopping 36.1 billion messages were exchanged on Bumble's apps through the first nine months of the year. There are 42 million monthly active users across Bumble's namesake app and Badoo. Just 2.4 million or 6% of them are paying users.

Bumble's revenue soared 36% to hit $488.9 million in 2019, but it was the combination of Bumble's 70% growth held back by Badoo's 8% top-line increase. Bumble accounted for 56% of the revenue mix in 2019. Framing Bumble's growth next to Match Group as the market darling, Bumble grew its revenue three times better than Match Group with its 12% growth spurt. The playing field was more level in 2020, as Bumble and Match Group both grew in the mid-teens through the first nine months of the year.

There's still a lot to like here when it comes to Bumble in a market correction that may not last much longer. Online dating apps should only continue to gain steam as we claw our way out of the pandemic crisis, and Bumble will continue to stand out with its unique platform that puts women first.

Empowering women isn't just a gimmick. Women make up three of the four members of its executive team and 8 of its 11 board members. With Bumble's ceiling seemingly higher than Match Group since its earlier in its growth trajectory-- and both stocks trading at roughly the same price-to-revenue multiple -- what are you waiting for? Match Group may have been the one that got away, but Bumble is right there waiting for you. It's the better catch. You know the deal by now. You have to make the first move.