Please ensure Javascript is enabled for purposes of website accessibility
Log In Help Join The Motley Fool
Free Article Join Over 1 Million Premium Members And Get More In-Depth Stock Guidance and Research
By David Jagielski - Feb 27, 2021 at 6:45AM

The company avoided spending its stockpile of cash on a potentially bad acquisition.

Sundial Growers (SNDL -1.99%) has taken its shareholders on a wild ride over the past few weeks. After reaching highs of nearly $4 per share, the stock has sharply crashed back down to around $1.44 as of Feb. 25. In recent months, Sundial has been the target of retail investors and speculators who have been hoping that a deal involving the pot stock was imminent after the company said it was exploring "strategic alternatives."

But a major merger or acquisition hasn't taken place just yet. And while investors may be disappointed that Sundial missed out on the opportunity to acquire Zenabis Global, they should actually be breathing a sigh of relief. 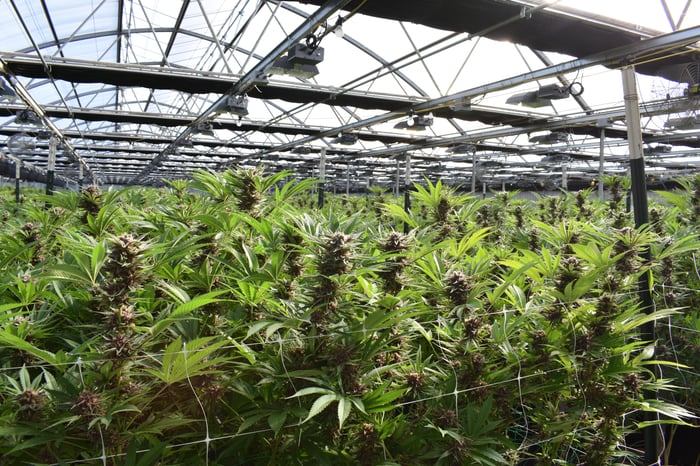 Was Sundial trying to buy Zenabis?

There was quite a bit of drama involving Sundial and Zenabis over the past few months. It all started on Dec. 30, 2020, when Sundial acquired Zenabis' senior debt through an acquisition of a special purpose vehicle. Days later, Zenabis would receive a notice of default, and it alleged that Sundial was simply trying to take it over. The company would end up finding another source of credit so that it could refinance the debt Sundial held. And then this month, news broke that HEXO (HEXO -3.58%) would be acquiring Zenabis for 235 million Canadian dollars.

Given that HEXO paid a 19% premium for Zenabis, it's possible that Sundial was involved in the bidding. Otherwise, it wouldn't make a whole lot of sense -- Zenabis isn't exactly the type of investment you would pay a large premium for. Although the company has generated CA$71 million in sales for the nine-month period ending Sept. 30, 2020, the rest of its income statement looks abysmal. Its net loss during that time frame amounted to CA$40 million, and it incurred CA$20 million in expenses just as a result of interest. The company has even more expenses related to its debt, including a CA$11 million loss on the modification and extinguishment of it and then another CA$10 million loss on the early conversion.

Zenabis is a money-bleeding machine that over the past three quarters has used up CA$22 million in cash from just its day-to-day operating activities. It has been staying afloat by issuing shares -- to the tune of CA$28 million.

Why Sundial is better off without Zenabis

HEXO will get bigger as a result of its acquisition of Zenabis, but whether the business will be better off is debatable. The company also points to access to the European market as being an attractive feature of the deal. However, with the U.S. market potentially legalizing marijuana within the next few years now that the Democrats are in control, there could be a much more lucrative opportunity waiting in North America.

Even analysts aren't sure this is a good move for HEXO. One analyst from Jefferies, Owen Bennett, wasn't bullish on the acquisition and said, "we do wonder if this has been overly driven by short termism." That could be alluding to the wave of buying pot stocks have enjoyed since Joe Biden's election win in November and the more positive outlook for the industry. Since the election, HEXO's stock has nearly tripled, the Horizons Marijuana Life Sciences ETF is up 100%, and Sundial's valuation has skyrocketed more than 720%.

Sundial's management took advantage of that surge in price, issuing shares multiple times and raising approximately CA$220 million in recent weeks. Stockpiling cash (and not wasting it) helps to put Sundial in a stronger financial position. After its most recent stock issue, the company said it had CA$610 million in "unrestricted cash." That is a significant improvement from when Sundial reported its third-quarter results on Nov. 11, 2020, where it said its cash on hand was just CA$60 million.

On Feb. 16, the company announced a CA$22 million investment in Indiva, which makes cannabis edibles. This is a good example of a low-cost move that makes sense for Sundial: It can advance its position in the Canadian cannabis market in a relatively modest way that won't tie up a significant chunk of its resources. The deal consists of CA$11 million in common share purchases plus another CA$11 million in a term loan facility.

Is Sundial stock a buy?

Sundial is a contrarian buy, there's no doubt about that. Its net sales over the past three quarters have totaled just CA$47 million -- which is a year-over-year decline of 3.6%. That's troubling to see, especially as the industry is continuing to grow. And that's not the only problem. Sundial has incurred a CA$175.8 million loss during that time frame, which is 39% higher than it was a year ago. Usually, investors see a growing company incur higher losses because it is growing at a fast rate. But in Sundial's case, that isn't happening.

The company's poor financials represent a big risk to Sundial investors. However, with plenty of cash on hand, the business itself isn't in any imminent danger, and investors don't need to worry about it actually running out of money anytime soon. For that reason, Sundial is at the very least stable -- for the time being.

However, I would still hold off on buying this pot stock until it provides investors a tangible reason for doing so. Buying based on the hope of a potential acquisition could leave investors frustrated if a deal doesn't happen, and that could also send the share price crashing.