Please ensure Javascript is enabled for purposes of website accessibility
Log In Help Join The Motley Fool
Free Article Join Over 1 Million Premium Members And Get More In-Depth Stock Guidance and Research
By Rich Duprey - Mar 1, 2021 at 9:15AM

There was some hopeful news from the cruise ship operator, but the industry is still struggling.

All cruise ship operators are riding a wave of optimism higher, but none more so than Royal Caribbean (RCL 8.69%), whose shares have risen nearly 400% from the lows they hit last March.

On the fourth-quarter earnings call, management said bookings in 2021 (through late February) are running 30% above what they were in November and December as COVID-19 vaccinations encourage more people to plan cruise vacations. As of this writing, Royal Caribbean stock is rising to heights not seen in almost a year as the prospects for a recovery look better than they ever have since the pandemic shut down travel around the globe.

But with challenges still looming on the horizon for this industry, the market has gotten a bit ahead of itself. 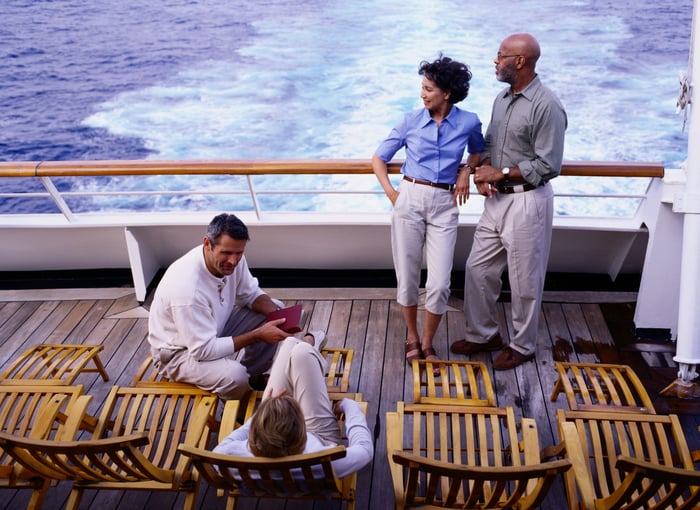 Batten down the hatches

Although the U.S. Centers for Disease Control is agreeable to eventually reducing travel restrictions, it remains noncommittal, so there is still no timetable for cruise ships to begin sailing again.

The U.K. locked down its country a second time to kick off the new year, and Germany seems willing to keep lockdowns in place for an extended period as Chancellor Angela Merkel just warned the country is in the grip of a "third wave" of coronavirus cases, and lifting restrictions now would be a mistake. Canada also banned all cruises to and from its ports until Feb. 2022 at the earliest.

Expecting travel and cruising to soon return to anything close to pre-pandemic levels is a mistake.

The cruise lines seem to understand this. Carnival (CCL 8.46%)(CUK 8.00%) and Walt Disney (DIS 2.28%) both just announced they were canceling all voyages until June, with the latter even canceling some trips scheduled for August. Other voyages later in 2021 may see a similar fate.

For example, Carnival's Princess brand has dropped all cruises longer than seven days until November, though that's more because the CDC currently prohibits cruises over seven days under its conditional sailing order.

And those decisions follow the announcement from Norwegian Cruise Lines (NCLH 12.09%) earlier this month that it had suspended cruises on its Norwegian, Oceania, and Regent Seven Seas ships until June.

Right now, Royal Caribbean says it still intends to resume some sailings in May, but the cruise lines typically follow one another in making these announcements, so investors shouldn't be surprised if the company follows up with more bad news.

A slow return to normalcy

It's also important to realize that even if the cruise operators do begin sailing under these latest timetables, it's going to be at a dramatically limited scale. Their full fleets won't be pressed into service immediately, because companies still need to devise health and safety protocols that meet the needs of health officials and passengers.

Capacity constraints will also be a feature of any new sailing schedule, meaning the full revenue potential of each ship will also be limited. In short, there will only be a few ships sailing from each fleet with fewer passengers, and they'll be leaving from and sailing to a small list of global ports as the cruise lines test the waters to see which combination works best.

As a result, the financial woes the cruise operators are facing will only lessen somewhat, and the large amount of debt these companies took on to deal with the crisis will still weigh down their businesses.

It's appropriate that investors have a long-term mindset when it comes to their stocks. Not worrying about the ups and downs of a particular quarter, or even a bad year such as the one we just experienced, and focusing on the outlook of a business for years to come is the optimal approach.

Yet cruise ship operators -- and Royal Caribbean in particular since it is leading the industry's recent gains thanks to a more hopeful outlook -- are still in uncharted territory. Simply assuming calmer seas lie ahead is wishful thinking at this point.

The industry may make it through the pandemic ready to take advantage of consumers' pent-up demand for travel, but bidding up shares so much now, so far in advance of any visibility into the scale and pace of a recovery, is more of a gamble than an investment.