Stocks fell sharply late in the session on Tuesday, but investors still love some select companies.

After a one-day reprieve that brought the stock market one of its best days in the past year, Wall Street had a late-day sell-off on Tuesday that took all three major market benchmarks into the red. The Dow Jones Industrial Average (^DJI 1.98%) and S&P 500 (^GSPC 1.86%) managed to limit their losses to less than 1%, but the Nasdaq Composite (^IXIC 0.00%) wasn't as lucky. Market participants seemed ready again to punish high-flying growth stocks in favor of alternatives.

It's been about a month since the saga of GameStop (GME 0.49%) captured the attention of investors and non-investors alike. Since then, many have wondered whether there might be another stock that will get the same treatment that GameStop did. Tuesday's market session might have revealed an answer, as comments surrounding mortgage company Rocket (RKT -1.91%) bore an uncanny resemblance to some of the discussions that happened with the video game retailer in late January and early February.

Shares of Rocket shot higher by more than 70% on Tuesday. That added to gains in recent sessions that together caused the stock to double just in the past week. 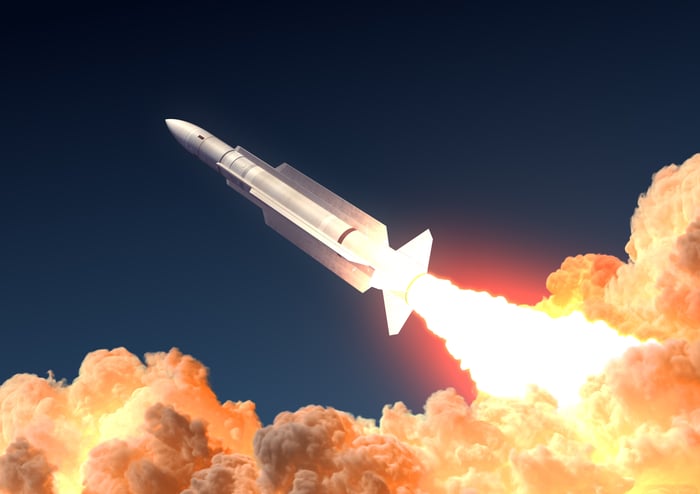 The initial move upward for Rocket's stock last week came after the company issued an extremely strong earnings report. The mortgage specialist said that its fourth-quarter revenue had jumped 144% from the same period in the prior year, with loan originations more than doubling as well. Rocket saw a 60% rise in the number of visitors to its website and app to more than 150 million, and the company also saw ancillary businesses in areas like auto loans and digital home buying and selling show promising signs of growth. Rocket even announced a special dividend of $1.11 per share.

But that news took the stock up only 10% on Friday. Monday's 11% gain built some upward momentum above and beyond what any new information gave traders. What happened on Tuesday seemed to confirm that more was going on.

Many market participants are speculating that Rocket has become the latest example of a GameStop-like short squeeze. They point to volume that was 10 times greater than in Monday's session as possible evidence of coordinated action, with a note from financial analytics company S3 Partners provocatively titled "Rocket Shorts Are Crashing and Burning."

Indeed, short interest in Rocket is extremely high, at more than 45% of the stock's available float, according to S3. That has prompted lengthy discussions of the mortgage stock on the WallStreetBets Reddit forum.

Is it different this time?

Beyond short interest, Rocket and GameStop don't have a lot in common. GameStop has been in business for decades, while Rocket is a relatively new company that just came public last summer. GameStop has hit a rough patch and is struggling to dig its way out, while Rocket just announced extremely attractive financial results that could point toward long-term success.

Some long-term investors probably hoped that the GameStop short squeeze would prove to be an isolated incident. Instead, it appears that Rocket might well be the next stock to become the center of attention -- and more could follow in the future.