Please ensure Javascript is enabled for purposes of website accessibility
Log In Help Join The Motley Fool
Free Article Join Over 1 Million Premium Members And Get More In-Depth Stock Guidance and Research
By Taylor Carmichael - Mar 3, 2021 at 6:25AM

The X-ray disrupter is almost 50% off its highs.

That question is actually a little tricky. A cheap stock price can mislead people into buying shares of a mediocre company, or even a bad company. Amazing companies have stock prices that go up over the long term. If you own shares of a less-than-amazing company, and it's clobbered by its rivals, the stock will get cheaper. So is Nano-X's cheaper price an opportunity or a warning sign? 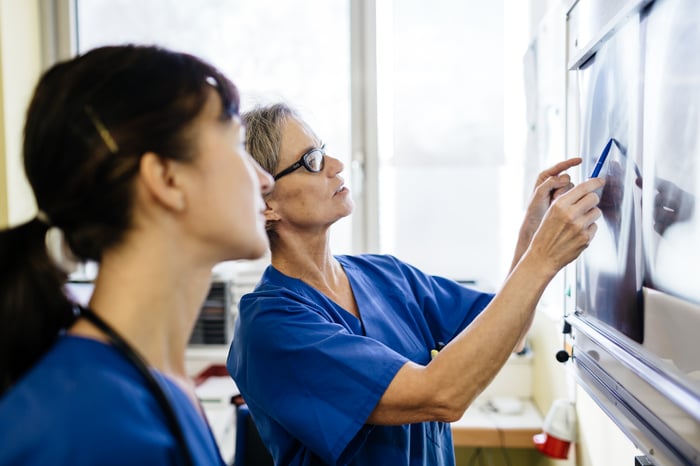 One of my early lessons in the stock market involved Cisco. Twenty years ago, Cisco was the No. 1 networking company in the world. And I was trying to decide whether I should buy shares of Cisco, or the No. 2 networking company, 3Com. I bought shares of 3Com, and my reasoning was that it was a better deal, because the stock was a lot cheaper. You probably haven't heard of 3Com. That's because it dissipated into nothingness. Meanwhile, Cisco investors got rich.

The lesson I learned is that you always want to buy shares of the strongest companies in the stock market -- even if the stock is expensive. Winning companies usually continue to win and dominate rivals. And of course, the price of excellence is high. So most of the stocks I buy now are actually pretty expensive, trading at big multiples of estimated future earnings.

While Nano-X stock is a lot cheaper than it was, the stock is actually very expensive, vis-a-vis the whole market. If Nano-X had earnings, its price-to-earnings (P/E) ratio would be off the charts. The value trap you want to avoid is buying shares of an inferior company because the stock is cheap. Nano-X is not only the best at what it does, it's one-of-a-kind. So I don't think this is a value trap; you can simply pay a cheaper price for an excellent company today than you could have a few weeks ago.

Technology starts off rare (and expensive), and becomes ubiquitous (and cheap)

Nano-X is introducing a new kind of X-ray. X-ray technology has been in medical use for over 120 years. Computer-assisted tomography (CAT) scanners and medical resonance imaging (MRI), which are commonplace in hospitals, cost over $1 million and up to $3 million.

Now, Nano-X is threatening to disrupt the entire X-ray industry. The typical X-ray machine is expensive because it requires a massive amount of heat to work -- up to 3,600 degrees Fahrenheit. Nano-X's machine works at room temperature. Using nanoparticles, Nano-X has discovered a way to digitize the power source for an X-ray device. This advancement makes it a far cheaper device to manufacture. If and when Nano-X earns regulatory approval, the company will offer its X-ray device to hospitals for $10,000, or even cheaper than that. It's this cheap price that is causing so much early consternation.

Improved technology often makes things cheaper. The U.S. spent $28 billion to put a man on the moon. Adjusted for inflation, we actually spent $283 billion in today's dollars. And it's been estimated that the iPhone in your pocket has 100,000 times more computational power than the computers that put a man on the moon.

That sort of dramatic price reduction hasn't happened with X-rays -- yet. The X-ray market is dominated by huge conglomerates like Fujifilm (FUJIY -0.22%), General Electric (GE -1.57%), and Siemens AG (SIEGY -4.39%). Nano-X's breakthrough might radically change this industry. And it speaks volumes that the early venture capital given to Nano-X came from industry veterans like Fujifilm, as well as manufacturers like SK Telecom (SKM -4.21%) and Foxconn, the makers of the iPhone. Last year, when Nano-X was still private, it received $26 million in funding from this group.

Expensive in the short term, cheap in the long term

Make no mistake, Nano-X is still an expensive stock, even though it's price has dropped in recent months. Right now, the company is like a biotech stock without any drugs on the market. Later this year, Nano-X expects to receive FDA clearance and to start marketing its device in the U.S. starting in its Q4. I expect shares to dramatically spike when this happens, and to continue shooting higher over the next decade.

For long-term investors, it actually doesn't matter if you buy your shares at $87 or $46. While that price differential seems large now, as Nano-X scales and becomes much larger over the next decade, these 2021 share price differences will recede in importance. Does it matter if you bought Apple at $1 or $2? Not really. When you're early to the game, small investments can create massive returns over time.