Please ensure Javascript is enabled for purposes of website accessibility
Log In Help Join The Motley Fool
Free Article Join Over 1 Million Premium Members And Get More In-Depth Stock Guidance and Research
By Zhiyuan Sun - Mar 3, 2021 at 6:30AM

The companies with game-changing technology are often the best growth picks.

For investors looking for highly innovative firms with asymmetrical risk-reward profiles -- the hunt is over. Virgin Galatic Holdings (SPCE -5.72%), CRISPR Therapeutics (CRSP 0.60%), and Churchill Capital Corp IV (CCIV) are three stocks that have returned between 56% and 193% over the past 12 months alone. The rallies are quite spectacular, considering the S&P 500 only returned 16% over the same period.

Holding onto a large stake in these fimscan pay off handsomely years down the line for investors who act boldly today. Today, let's look at why a commercial space travel company, a gene therapy biotech, and an electric vehicle (EV) manufacturer are among the most revolutionary stocks to buy now. 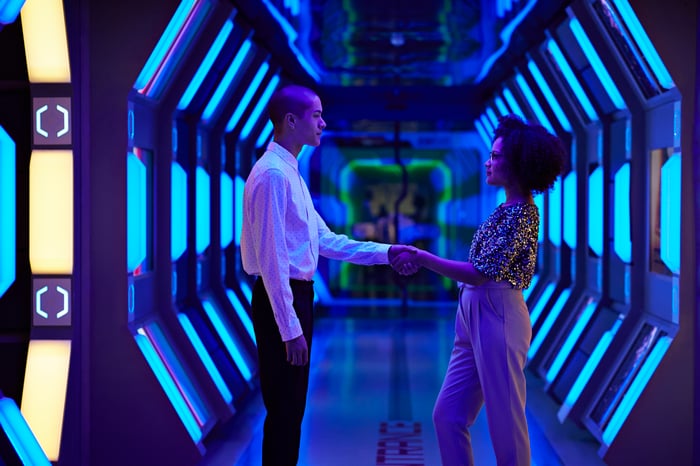 With no sales, more than $273 million in net losses, and a market cap of $8.7 billion, billionaire Richard Branson's space leisure company, Virgin Galactic, may be a surprising addition to this list. The reason for its inclusion is simple -- ambition.

Right now, the company is looking to offer space flights to an orbital level two to three times higher than the International Space Station's current trajectory. Wealthy individuals would be able to enjoy a breath-taking view of the entire planet in zero gravity for a hefty price of $250,000 per person per flight. Believe it or not, at least 1,000 people have already signed up -- meaning the company already has close to $250 million in future revenue in the bag.

Surprisingly enough, recreational space travel hasn't been feasible in the past, mainly due to economic reasons rather than technological barriers. Back in the 1970s, it would cost more than $18,500 to send one kilogram of payload into space. By 2019, that number had fallen to just $2,720.

In the beginning, governments would fund astronomical programs with hundreds or thousands of private contractors bidding on parts of the spacecraft itself. Hence, each component was subject to heavy profit markups in addition to the massive bureaucratic resources needed to coordinate across companies, but the U.S. government gladly footed the bill. It was in everyone's interest not to let the Soviet Union win the Space Race. Back then, space travel was more or less motivated by the need to stop the spread of communism, and little attention to was paid to the actual costs of the program.

Nowadays, private aerospace firms like Virgin Galactic build their spacecraft using their own in-house parts and staff, dramatically reducing costs. I would not be surprised if commercial space travel became widespread within the next three decades. At the moment though, the tech is still emerging, and it'd be hard to convince clients to pay half a million dollars for another space ride after the first. For these reasons, one can safely buy and hold a large stake in this maverick exploration company, but have to hold for the long term.

CRISPR Therapeutics is at the forefront of treating various types of cancer and hereditary blood disorders via immuno- and gene therapy. Each year, about 360,000 babies worldwide are born with either sickle cell disease (SCD) or beta thalassemia. In the case of the former, the disease distorts the shape of patients' hemoglobin. This, in turn, can cause a life-threatening condition called a vaso-occlusive crisis (VOC), in which irregular-shaped red blood cells clump up and constrict blood vessels. Beta thalassemia can significantly reduce a patients' level of hemoglobin. Patients who suffer from either condition require frequent blood transfusions and hospitalization. There is no cure for the two disorders aside from a bone marrow transplant.

But CRISPR Therapeutics might be coming to the rescue. In phase 1/2 clinical trials, patients who received its CTX001 gene therapy transfusion saw their hemoglobin levels return to normal, were free of VOCs, and no longer depended on transfusions. Additionally, the company's CTX110 immunotherapy managed to eliminate tumor activity completely in 4 out of 11 patients with lymphoma. The patients all had advanced-stage cancer and went through two to five different therapies before enrolling in CTX110 trials.

At the moment, pharma companies that make drugs to treat SCD are valued at upwards of $3 billion, while biotechs that successfully advance immunotherapies to market could see up to $21 billion in valuation. Given CRISPR Therapeutics' $9.9 billion market cap, the stock still has quite a bit to go before it might be considered overvalued. The company also has more than $1.69 billion in cash with just $348.9 million per year in losses. Given the strength of its science and its financial health, this is one biotech that's sure to add wealth to your portfolio.

Churchill Capital IV is a special purpose acquisition company (SPAC) that will bring luxury EV manufacturer Lucid Motors public. The deal will be finalized in the second quarter of this year.

Before then, buying shares of Churchill Capital IV will be the only way to go long on Lucid Motors. For a premium of $69,600, affluent EV enthusiasts will be able to purchase Lucid Motors' signature vehicle, Lucid Air. This car will have a range of more than 500 miles, an acceleration time of 2.5 seconds to go from 0 mph to 60 mph, and a 20-minute charge time to reach 60% battery capacity. Those specifications can match or beat Tesla's EVs, especially in terms of maximum range.

The Lucid Air is set to launch by the end of the year or in early 2022. Lucid Motors has already received over 7,500 reservations for it -- and it only costs $300 to reserve a car. Assuming that all of its potential clients will fulfill their pledge, the company could have over $650 million in revenue on the table next year.

The acquisition will also value Lucid Motors at $11.75 billion and infuse it with $4.5 billion in cash. With the new capital, Lucid Motors expects to bring in $2.22 billion in sales next year and grow that number to a stunning $22.8 billion by 2026. It hopes to turn a profit by 2025.

The company can already manufacture 34,000 cars per year and aims to expand that number to 365,000 by opening new facilities. If you are looking for a game changer in the EV sector, Lucid Motors is a great bet. It is only trading for 5.3 times its 2022 revenue, much lower than the 6.8 times to 12.9 times multiple its peers are priced at. Given the discount, I wouldn't be afraid of putting a good chunk of money into the stock.