Please ensure Javascript is enabled for purposes of website accessibility
Log In Help Join The Motley Fool
Free Article Join Over 1 Million Premium Members And Get More In-Depth Stock Guidance and Research
By Zhiyuan Sun - Updated Feb 5, 2021 at 9:28AM

Which of these two hot gene therapy stocks is the better buy?

Over the past year, shares of gene-editing companies Editas Medicine (EDIT 0.73%) and CRISPR Therapeutics (CRSP -0.27%) have shot up 129% and 212%, respectively. Their mouth-watering returns make the S&P 500's incredibly jump of 17% (during a fraught economic period and public health crisis, no less) look relatively puny.

As we enter the golden age of biotech, it could pay off to invest in the most innovative technologies and companies in the sector. Both firms are focusing their efforts on treating rare genetic disorders, and CRISPR is also specializing in immuno-oncology. Let's see if Editas or CRISPR Therapeutics has the better risk-reward potential. 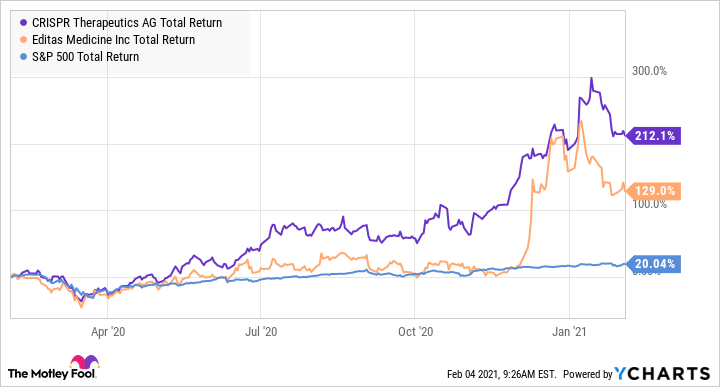 Editas has only one gene therapy candidate in phase 1 trials, and a few others in the preclinical stage. However, that has not stopped the company from reaching a market cap of nearly $4 billion. The company expects to have phase 1 data on EDIT-101, a candidate to treat a hereditary retinal disorder that can cause blindness in infants, by the end of the year. There are over 30,000 patients with the condition. Like many rare-disease gene therapies, Editas could charge up to six figures for a course of treatment if approved. 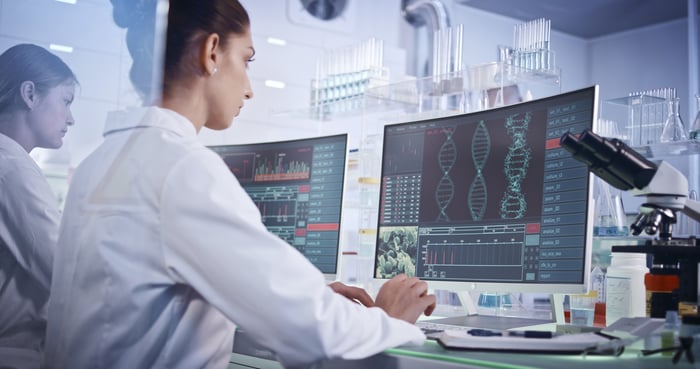 The company is also developing EDIT-301 to target sickle cell disease (SCD) and beta thalassemia, both of which are hereditary blood disorders. In the case of the former, the disease distorts the shape of patients' hemoglobin. This, in turn, could cause a life-threatening condition called vaso-occlusive crisis (VOCs), where irregular shaped red blood cells clump up and constrict blood vessels. In the U.S. and E.U., there are over 165,000 patients with SCD and over 15,000 with beta thalassemia. There is no cure for either; current treatments range from blood transfusions, bone marrow transplants, to medications for SCD.

Right now, the drugs that treat SCD cost up to $15,000 per prescription, despite only having a moderate benefit, indicating a massive opportunity should Editas find a cure for the condition. The company expects to advance EDIT-301 into clinical trials this year.

It could cost as much as $3 billion to bring one gene therapy from phase 1 to approval. Editas only has about $500 million in cash on hand, albeit without debt, and raised another $231 million in January to fund its operations. Investors shouldn't be surprised if the company continues selling stock to finance its research over the next few years.

Like Editas, CRISPR Therapeutics is also investigating a line of gene therapies (CTX-001) for treating SCD and beta thalassemia. But its investigation has already produced some superb results.

So far, at least one patient with beta thalassemia saw their hemoglobin level normalize to the level of healthy adults post-infusion with CTX-001 during a phase 1/2 study. In a similar study, three patients with SCD no longer needed blood transfusions and nor experienced VOCs 10 months after treatment.

CRISPR's pipeline does not stop there. It's also developing CTX-110, an immunotherapy consisting of gene-edited, donor-derived cells for fighting cancer. During an interim phase 1 data release, four out of 11 patients with aggressive non-Hodgkin lymphoma developed complete responses after receiving CTX-110 infusions. A complete response is defined as the disappearance of all tumor activity post-treatment. Three additional patients saw their disease stabilize post-treatment, meaning there was neither substantial improvement nor deterioration of their condition.

It would mean a lot for CRISPR Therapeutics if it can get CTX-110 past the regulatory hurdle. Large-cap biotechs have paid as much as $21 billion for cancer immunotherapies that make it to market. Like Editas, CRISPR Therapeutics also had no debt and about $1 billion in cash on hand. It differentiates from the former as it has the backing of large-cap Vertex Pharmaceuticals (VRTX 1.23%). Under a 50-50 partnership, the two companies will share cost expenses and revenue for CTX-001, assuming they can get it to market.

Given CRISPR Therapeutics already has data on its key gene therapy candidate and has more potential market reach with its oncology pipeline, it is without a doubt a much safer choice than Editas. In addition, CRISPR Therapeutics is in a slightly better financial position than Editas. However, that's not to say Editas isn't a buy at all, especially if it can find a biotech partner to develop its candidates with.

There are gene therapies already out on the market that target indications similar to those in Editas' pipeline, and it will likely take a few years for both companies to run their experimental therapies in late-stage studies. If you think their science is worth the risk, consider adding both Editas and CRISPR Therapeutics to your portfolio.