Please ensure Javascript is enabled for purposes of website accessibility
Log In Help Join The Motley Fool
Free Article Join Over 1 Million Premium Members And Get More In-Depth Stock Guidance and Research
By Lee Samaha - Updated Mar 3, 2021 at 10:47AM

There's been a sentiment change recently regarding stocks with oil and gas exposure.

Shares in subsea robotics company Oceaneering International (OII 5.92%) rose a remarkable 39.6% in February, according to data from S&P Global Market Intelligence. The larger part of the move came after a well-received set of fourth-quarter earnings.

The size of the move is a reminder of what can happen when a stock in a beaten-up sector reports something that might encourage investors to think the company is over the worst. In this case, it's Oceaneering and its exposure to offshore oil-field spending.

As noted by the company in its earnings release, "The COVID-19 pandemic negatively impacted operator investments in oil and gas projects, due to a decline in crude oil demand and pricing." Given those market conditions in 2020, it's understandable that some investors have been cautious in putting money into the sector. 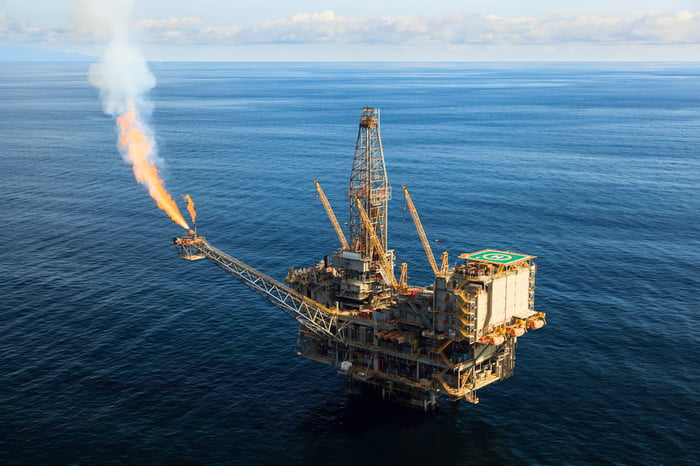 But with the price of oil having stabilized and now back up to above $60 a barrel, it might be time to start looking at stocks with exposure to oil and gas spending like Oceaneering International. That viewpoint was strengthened by a better-than-expected earnings report.

Of particular note, management said that its key subsea robotics business secured more than $225 million of contracts during the fourth quarter of 2020. That represents nearly 46% of the business' $493 million revenue over the full-year 2020.

Wall Street analysts still expect Oceaneering's revenue will decline in 2021, but a bottoming appears to be happening, and it's estimated that sales will bounce back in 2022. Moreover, management expects to generate more free cash flow in 2021 than the $76 million in 2020.

The results and brighter outlook, in tandem with a higher price of oil, serve notice that there is life after the pandemic for the oil and gas sector. Also, the use of Oceaneering's robots and other products in energy exploration, development, and production has the potential to increase as a share of overall spending on offshore oil-field investment.

Aside from keeping an eye on Oceaneering's public statements and results, it's a good idea to monitor spending conditions in the industry -- notably the capital spending budgets of the major oil companies. The reality is that industry spending is often led by the price of oil, but there can be a lag since it takes time for budgets to be approved. Therefore, even if the pickup in spending isn't immediately apparent after a rise in oil prices, it's likely to kick in sometime in the future.

Why Shares in Subsea Robotics Company Oceaneering Slumped This Week