Please ensure Javascript is enabled for purposes of website accessibility
Log In Help Join The Motley Fool
Free Article Join Over 1 Million Premium Members And Get More In-Depth Stock Guidance and Research
By Rich Duprey - Mar 4, 2021 at 6:28AM

Having a discounted valuation doesn't have to mean low quality.

You don't need a Reddit rally in GameStop to make you rich in the stock market. In fact, betting on a quirk of circumstance to bring you riches is a surefire way to lose money.

Instead, finding good businesses with long-term growth potential is the key to success, and unlocking that door by getting into them while they're discounted can magnify their returns. Here are three cheap stocks that give you a great chance of getting rich off them. 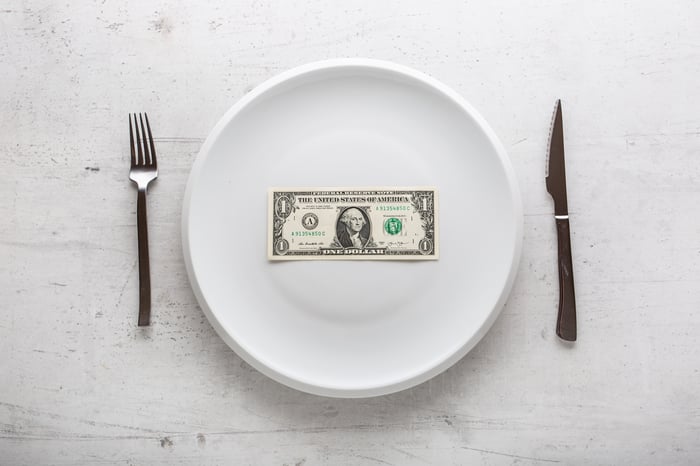 There have been few products during the COVID-19 pandemic so much in demand, and for so long, as disinfecting cleaning wipes from Clorox (CLX 3.03%). In fact, demand still outweighs supply and Clorox doesn't think it will catch up until late in the summer, even though it has expanded capacity and brought on third-party manufacturers to help fill the void.

While shares of Clorox surged early on during the coronavirus outbreak, they peaked last August and have been declining ever since. Shares now trade almost 25% below those highs, and the stock's price-to-earnings (P/E) ratio is around a five-year low. Yet this consumer stalwart still has plenty of growth ahead.

Few companies have the brand recognition Clorox does, which helps confirm it as a leader in most of the markets it operates in, and it possesses a strong track record of product innovation. Extending its bleach brand into a line of must-have disinfecting wipes is just one example.

The essential nature of its product portfolio allows it to generate steady operating earnings and cash flow, which it has used to return capital to shareholders in the form of dividends that it has paid out for decades and has raised for over 50 consecutive years. This makes it a Dividend King, a company that's hiked its payout annually for 50 years or more.

With its stock depressed but with a solid financial foundation beneath it, investors can still clean up with Clorox.

Another trend that has become essential during the pandemic is the need for consumers to stretch their wallets as far as they can go. With businesses forced to close and unemployment hitting record levels, making a dollar go further than it ever had before is critical. Dollar General (DG 13.71%) has been the store many consumers have turned to.

The deep discount retailer makes food and household goods available at rock-bottom prices. With most of its products sold at $10 or less, a family could shop there with confidence of finding a good deal. And just like during the Great Recession, consumers who went downmarket out of need have stayed there long afterwards.

Dollar General is the premier dollar store chain and has separated itself from its rivals by introducing a broad selection of fresh food and produce to its stores. While it will face some pressure from rising labor and transportation costs, the long-term outlook remains positive. Meanwhile, the stock's P/E ratio is around a two-year low.

Over the next couple of quarters, it will face tough comparisons to last year as panic buying took hold and consumers hoarded goods, but that just gives investors another chance to lock in the stock on any weakness in Dollar General's shares.

Petco Health & Wellness (WOOF 4.37%) is in the doghouse with the stock market. Its January IPO was priced at $18 per share and closed 73% higher on its first day of trading, but it has been barking up the wrong tree since, as the stock now trades around $20 a share, a 30% decline from its high. Yet there's good reason to believe investors should have a dog in this hunt.

The humanization of pets continues unabated, and the demand for higher-quality nutritional products for Fido means consumers are willing to pay up. Certainly the pandemic posed a bit of a problem for Petco as online shopping became a go-to channel, which helped rivals like Chewy gain a strong following. But Petco has held its own as consumers have chosen to spend more at its stores, though they make fewer trips.

It's the future, though, that shows why Petco's stock ought to soon be tugging at the leash. Data from the American Pet Products Association indicates consumers spent $99 billion on companion animals last year, nearly 40% of which was on food and treats. Vet care pulled in another 30%, and that should also benefit Petco, which offers an online health advice service called PetCoach.

While competition in the pet care space is intense, Petco has a premier position in the market. That its stock has collapsed in the space of two months, putting it essentially back where it started, means investors didn't lose anything by not buying at the open (something you really shouldn't do anyway). Trading at a price-to-sales ratio just under 1.2, Petco stock is not a dog and ought to have strong potential going forward.