Please ensure Javascript is enabled for purposes of website accessibility
Log In Help Join The Motley Fool
Free Article Join Over 1 Million Premium Members And Get More In-Depth Stock Guidance and Research
By James Brumley - Feb 24, 2021 at 10:58AM

If you're thinking Dollar General's (DG 2.51%) best days are behind it, you're not alone. Analysts are calling for sharply slowing sales growth this year, leading to an outright contraction in earnings. This is a key reason its stock has been moving lower since October: Investors are simply taking things at their face value.

But the recent pullback is more likely to be an opportunity than an omen. This discounter has a few more growth cards to play against rival dollar stores like Big Lots and Dollar Tree than it's currently getting credit for, and it's better equipped to handle a looming increase in the nation's minimum wage than most people appreciate. 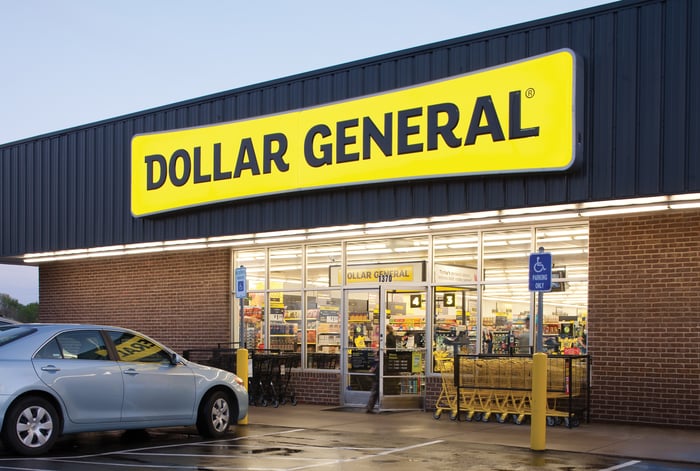 Although three-fourths of Americans live within five miles of a store, three-fourths of the retailer's more than 17,000 locations are in communities with populations of less than 20,000. This strategy means Dollar General doesn't have to compete head to head with companies like Walmart in many of its markets.

Less obvious but perhaps more important, discounters like Dollar General cater to lower-income consumers, and most of their new stores are opening in lower-income areas.

Still, the company's growth has been impressive. While not reaching Amazon-like levels of coronavirus-driven growth, Dollar General's year-to-date sales were up 23% year over year through its fiscal 2020 third quarter (which ended Oct. 30). Net income was up more than 70% over the same period, and the company's fiscal fourth-quarter is expected to show similar top and bottom-line growth.

But with the anniversary of COVID-19's arrival in the U.S. upon us, consumer goods retailers have a problem: Year-ago comparable-store sales are on the verge of looking much less impressive. After a likely 21% uptick in fiscal 2020 sales, Dollar General's revenue growth is projected to slide to just over 1% in the current year. And the consensus earnings estimate of $10.71 per share for fiscal 2020, up 59% from the prior year, is expected to slide back to $10.07 in the current year.

In light of this tough comparison, the stock's recent weakness comes as no real surprise. However, this mindset underestimates what Dollar General will be able to do once the pandemic finally abates.

Although buried by more riveting headlines, the growth plans Dollar General had made before the pandemic disrupted everything are still in place.

Case in point: The company intends to build 1,050 new stores this year and remodel 1,750 more. That's a tall order given COVID-19-related complications, except maybe it isn't. Dollar General reported with its third-quarter results that it was on pace to build around 1,000 new stores in fiscal 2020 and remodel about 1,670 locales.

In the same vein, around 600 more locations will begin selling fresh produce this year, up from the roughly 1,000 DG Fresh stores now. Meanwhile, many stores that don't sell perishables will still be getting an upgrade. A non-consumables initiative put in place all the way back in 2018, as a means of enhancing sales of higher-margin goods, has been implemented at more than 5,600 stores thus far.

Less than half of Dollar General's stores have been improved in at least one way or another within the past several years, but that's not a liability. It simply means most stores have yet to be equipped to make the most of their square footage.

Other new growth-driving initiatives include DG Pickup and DG GO. The former allows customers to make online purchases and retrieve them at a nearby store. It's now offered nearly nationwide, previously being available at only 2,500 stores as of the end of July. DG GO is a self-checkout option allowing for a completely contactless shopping experience.

So we've never actually seen the new-and-improved Dollar General compete with the likes of Big Lots and Dollar Tree in a post-pandemic retail environment. The lackluster 2021 outlooks from analysts arguably discount just how competitive this company was already becoming before the pandemic began and continued to become during the crisis (those outlooks call for growth to pick back up in 2022 and beyond, by the way). 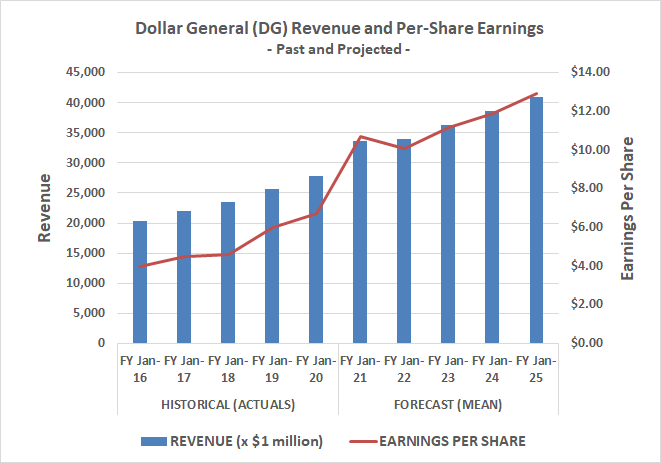 A higher minimum wage helps more than it hurts

There's an 800-pound gorilla in the room that calls the company's growth prospects into question. That's the effort to pump up the nation's minimum hourly pay to $15 by 2025. Dollar General employs 157,000 workers, many of whom currently earn considerably less. Jefferies analyst Randal Konik believes a large cohort of the company's employees only earn a bit more than half that, posing a huge cost risk to the brick-and-mortar chain.

Such concerns may be overblown, though. Selling, administrative, and general expenses only account for about 21% of the retailer's costs as a percentage of revenue, while merchandise amounts to 68%. And even then, not all of those selling and administrative costs are linked to employees currently earning less than $15 per hour.

Indeed, a nationwide increase in minimum hourly pay would ultimately put more disposable income into consumers' pockets without necessarily lifting those workers into the middle of the middle class. A full-time employee earning $15 per hour brings home around $31,000 per year, which is still Dollar General's demographic sweet spot. The company's core customers are families living in households with an average annual income of $40,000 or less. If anything, a minimum-wage increase would do more net good than harm by better empowering these consumers.

All of a sudden, the sell-off since October's peak looks like a mistake and a chance to step in at a discount before things pick up again in the near future.