Please ensure Javascript is enabled for purposes of website accessibility
Log In Help Join The Motley Fool
Free Article Join Over 1 Million Premium Members And Get More In-Depth Stock Guidance and Research
By Jim Halley - Mar 4, 2021 at 7:12AM

Green Thumb Industries, one of the biggest marijuana stocks by market cap, is finally turning a profit.

It was only a matter of time before Green Thumb Industries (GTBIF -2.46%) really started making some green. In the first quarter of 2020, it became the first U.S. cannabis company to exceed $100 million in revenue in a quarter.

Turning a profit is a great sign for Green Thumb, but what investors really want to know is whether this is just an aberration, or if the stock is poised to break out. Could now be the right time to buy stock in one of the biggest cannabis companies? 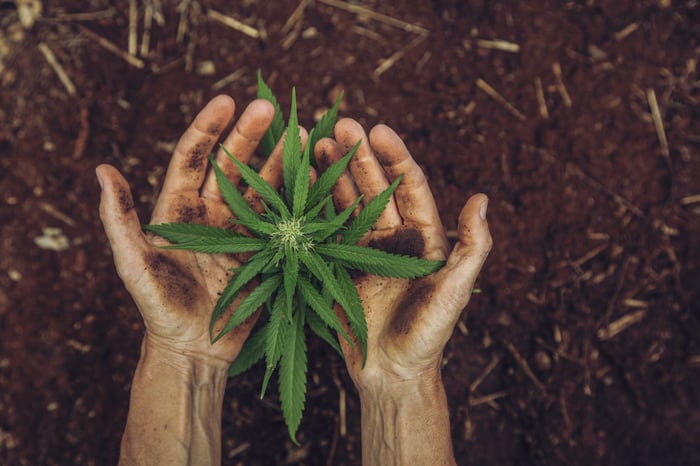 No shortage of sales

In the third quarter, the company posted revenue of $157.1 million, giving it year-over-year growth of 131.1%, along with its first "green" quarter in net income with $9.6 million, compared to a loss of $14 million in the same quarter in 2019. It also increased adjusted EBITDA to $53.2 million, an increase of 50% year over year.

The company is doing a good job of promoting and distributing its brands: Dogwalkers, Beboe, Dr. Solomon's, incredibles, The Feel Collection, and Rhythm. In the third quarter, the company said gross branded product sales grew 36% over the second quarter.

Investors have noticed. The company's stock has climbed more than 340% over the past year. It's not all due to Green Thumb's internal efforts. There are a lot of factors working in favor of the industry cannabis right now.

There are now 36 states that allow medical marijuana sales and an additional 15 that allow adult-use marijuana sales. New Jersey just passed a law allowing recreational sales last month, and Virginia decided in February to join them in 2024. Other states, such as Pennsylvania, New York, and Connecticut, have legalization bills in the works.

A Democratic-controlled federal legislature also has hopes high that marijuana could be legalized at the federal level. That massive move would allow pure-play marijuana companies to trade on the major exchanges in the U.S., open up financing opportunities for cannabis companies with U.S. banks, and provide additional money-raising opportunities through more stock sales. Federal legalization, if it ever does arrive, would be a game changer for Green Thumb and its peers.

Pennsylvania and Illinois are key to its marketing efforts

Green Thumb, founded in 2014, is the third-largest cannabis stock by market cap. It has 13 manufacturing facilities and 52 retail locations across 12 states, with licenses for a total of 97 stores.

The Chicago company has a big presence in Illinois, with eight stores and licenses for two additional stores. The state began allowing adult-use sales last year, and the dispensaries in Illinois sold nearly $700 million worth of cannabis products, generating more than $170 million in state taxes. That tax windfall has caught the attention of other states, particularly because revenue was down for many last year because of the pandemic.

Green Thumb's next push is in Pennsylvania, which allows medical marijuana and is examining a bipartisan bill that would legalize adult-use cannabis sales. New Jersey's adult-use bill was just signed into law, and Pennsylvania doesn't want to lose potential tax revenue from its residents crossing state lines to purchase legal weed.

Green Thumb opened its first medical-use marijuana dispensary in Pennsylvania in 2017 and already has 13 stores in the state, putting it in a good position to ramp up adult-use sales there. Green Thumb is also in a good position to expand in New Jersey, as it is licensed to operate one medical cultivation and processing facility and up to three retail medical cannabis dispensaries there.

The company appears to be planning for more expansion. This past month, it raised a total of $156 million by selling stock, including $100 million to one investor, saying in a release that it wanted to increase capitalization and financial flexibility. 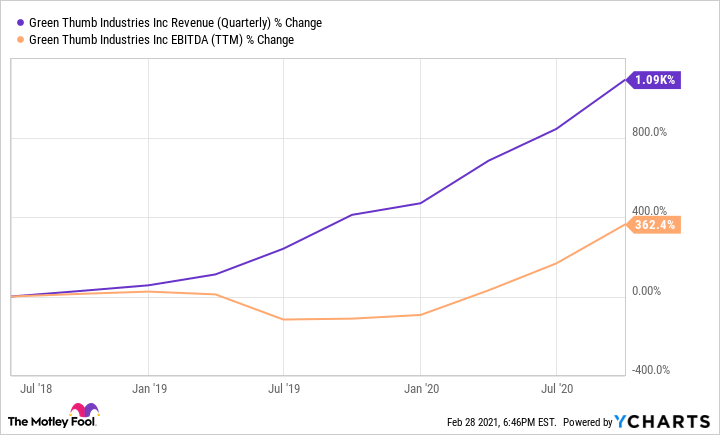 There are a lot of companies vying for what Green Thumb sees as eventually a $100 billion-dollar industry. (One report from New Frontier Data puts the compound annual growth rate for medical and adult-use cannabis sales at 21% over the next five years, reaching a total market value of at least $41 billion by 2025.) Not all of the companies currently in the field will make it in the big leagues, but some of the larger businesses should have the resources to benefit from the inevitable cannabis boom.

Given that Green Thumb has had three consecutive quarters of positive cash flow and is focusing on increasing its market share first in key states -- I see it as one of the legal market thrivers among cannabis stocks, and absolutely as a stock worth purchasing today.