Please ensure Javascript is enabled for purposes of website accessibility
Log In Help Join The Motley Fool
Free Article Join Over 1 Million Premium Members And Get More In-Depth Stock Guidance and Research
By Reuben Gregg Brewer - Mar 4, 2021 at 8:00AM

It's not a perfect company, and 2021 could look bad -- but it is likely to be a long-term winner, and now is a good time to pounce.

You will rarely, if ever, buy a stock at the very bottom (or sell one at the very top), so the best you can do is try to get in when share prices look reasonably attractive. That's where I think Kellogg (K 2.89%) stock is today.

Granted, I expect the price to drop some more in 2021, but I'll just sit tight and let the dividends reinvest while I wait for a long-term business improvement to take shape. Here's why you might want to do the same.

Kellogg is likely a name you've heard of before, given that it is an iconic cereal maker. But that's not all it does, with products ranging from cereal to snacks to frozen foods. And the brands it owns are names you have probably bought many times over, including category giants like Frosted Flakes cereal, Pringles chips, and Eggo waffles, among many others. It also has a material foreign business as well, with significant exposure in developing regions like Africa. This is not the same company it was just a few years ago when it started to revamp its portfolio to support slow and consistent long-term growth.

The company overhaul process it went through included selling assets (like the Keebler brand) and buying newer, trendier brands (such as Pringles). This overhaul process was largely completed in 2019 -- right in time for the coronavirus pandemic to hit. That's a very important variable here because food makers like Kellogg got a boost from consumers who were forced to eat at home more often because of the social distancing rules and the economic shutdowns used to slow the spread of the coronavirus.

Not surprisingly, Kellogg's stock rallied nicely off the bear market bottom in early 2020. Between late March last year and early September the stock price gained about 30% -- behind the S&P 500 Index, but about in line with the broader consumer staples group as measured by Consumer Staples Select SPDR ETF, which was up 35%. For an industry giant that had just gone through a corporate makeover, that's a pretty good showing.

But things shifted after that. The stock price is down around 18% from its September peak, while the broader consumer staples group is off by just 7% or so over the same span. This could be a compelling opportunity, given that Kellogg's dividend yield is around 4%, which is toward the high end of its historical range.

When we look back, 2020 is probably going to be a windfall year for a lot of companies, Kellogg included. That said, demand outstripped the company's ability to supply certain products, so it didn't fully participate in (or benefit from) the demand spike. Investors weren't pleased to hear that.

Still, organic sales growth of 6% was pretty impressive. But even here there's a negative since the company isn't likely to see a repeat of those growth conditions in 2021. In fact, the company is calling for organic sales to fall about 1% this year. No wonder investors aren't pleased.

But Kellogg also presented its numbers in a different way to better show its long-term results. It thinks that the underlying growth trend is still slowly and steadily marching higher. During Kellogg's 2020 fourth-quarter earnings conference call, management explained that it believes that 2021 sales will amount to a 2.5% two-year compound annual growth rate when you adjust for the unusual situation in 2020. That sounds reasonable and suggests that Kellogg has not lost its way -- it is still a slow and steady food maker.

Meanwhile, management didn't let the boost from 2020 go to waste. Revamping the portfolio involved spending money to buy new brands, a move that increased the company's leverage. With robust cash flows in 2020, Kellogg chose to pay down its debt. Making early payments increased the company's costs, but strengthened its balance sheet. That's a fiscally conservative move that sounds prudent and shareholder-friendly. It's pretty much what you would want a company to do -- or at least it's what I would want management to do. 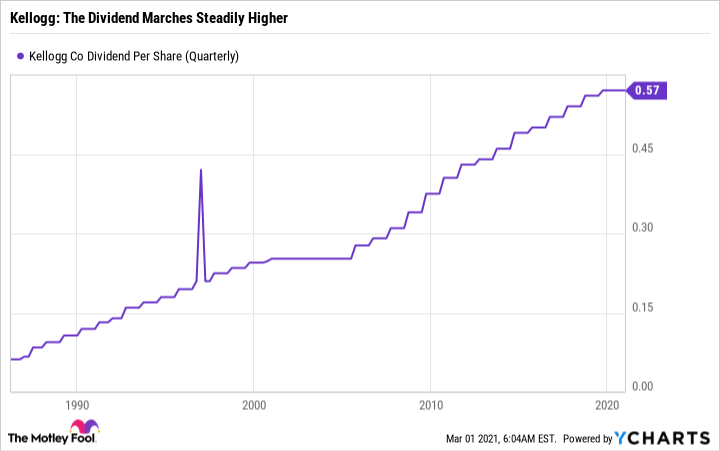 Kellogg also went ahead and announced a dividend increase for 2021 when it released 2020 fourth-quarter results. So it is still returning value to shareholders via dividend increases as it continues to move through its turnaround. And while Kellogg hasn't increased its dividend every single year, it has a long and steady history of increases behind it. It is also set to resume stock repurchases in 2021, offering management another way of returning cash to shareholders and suggesting that the company thinks its shares are relatively cheap, just like I do.

Kellogg has completed its makeover and is now shifting toward the slow and steady growth you would expect from a large and globally diversified food maker. The pandemic upended things a bit, boosting near-term growth and clouding the real long-term trend. That's going to be part of the equation for a little while, with coronavirus complications still very much an issue. But investors have gotten caught up in the near term, and are punishing the stock even though it is still largely on track with its plans. That means that investors willing to ride out the uncertainty can collect a historically generous 4% yield while they wait for the company to trudge through the difficult comparisons in 2021 (driven largely by the one-time pandemic boost in 2020). Perhaps I'm a little early, but trying to time the absolute bottom is a sure recipe for missing a good deal -- I know, I've done it before.

But what if I'm wrong and the company takes a few more years to get back on the growth track? Well, I figure the worst-case scenario is I own a storied food company with a great dividend history and a high yield. Given its efforts to strengthen its balance sheet in 2020, it also appears to be run by a prudent management team. That doesn't sound like too bad an outcome to me.