Please ensure Javascript is enabled for purposes of website accessibility
Log In Help Join The Motley Fool
Free Article Join Over 1 Million Premium Members And Get More In-Depth Stock Guidance and Research
By Keith Noonan - Updated Mar 4, 2021 at 9:29AM

The electric vehicle stock is now down 82% from its 52-week high.

Shares of Nikola (NKLA 3.21%) fell 21.6% in February, according to data from S&P Global Market Intelligence. Growth-dependent stocks saw a steep sell-off at the end of the month, and the electric vehicle (EV) company's valuation sank amid volatility for the broader market. 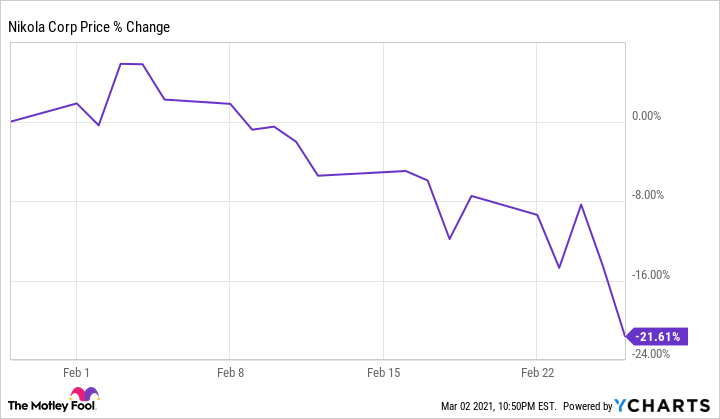 Electric Vehicle stocks have generally put up stellar gains over the last year, and Nikola stock has climbed roughly 44% across the stretch despite recent volatility. Rising Treasury bond yields combined with concerns about valuations in the tech sector prompted substantial sell-offs at the end of February, and the EV specialist's share price has been pressured amid the pullback. 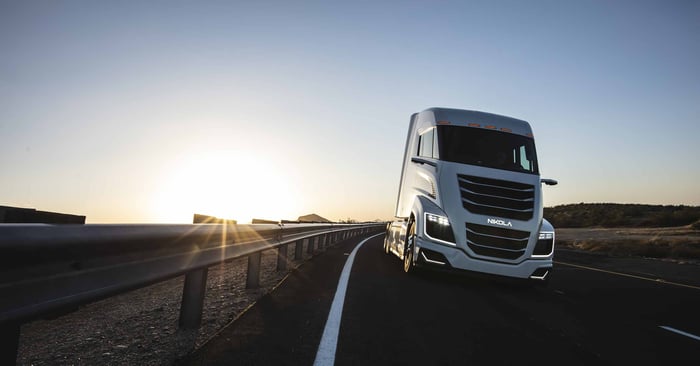 Nikola stock reached a high of roughly $94 per share last year, spurred on by anticipation for a potential partnership with GM and excitement for the overall EV space. However, the partnership with GM wound up being scaled back substantially, and Nikola stock's subsequent performance has been underwhelming compared to high-flying category leaders including Tesla and NIO.

While Nikola's gains have lagged those of top EV players, its valuation remains highly speculative because the business has yet to deliver vehicles in meaningful numbers. Nikola has a market capitalization of roughly $6.5 billion and is valued at approximately 400 times this year's expected sales, and it's not surprising that its stock has been pressured as the market has reassessed growth-dependent valuations.

Nikola stock has continued to slide early in March's trading. The company's share price has dipped roughly 8.7% in the month so far. 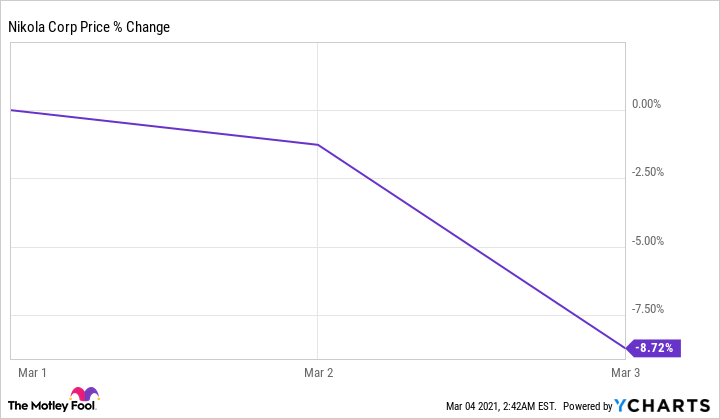 The overall EV space will likely see explosive growth through the next decade and beyond, and Nikola's focus on semi-truck designs and other commercial vehicles could help it tap into growth in those categories. However, the industry is becoming increasingly competitive, and Nikola's first-mover status in the commercial vehicle niche has yet to result in substantial revenue. The outlook for its Badger pickup truck also remains unclear. So, while Nikola has recently seen substantial sell-offs and trades well off its 52-week high, the stock remains a risky investment.