Please ensure Javascript is enabled for purposes of website accessibility
Log In Help Join The Motley Fool
Free Article Join Over 1 Million Premium Members And Get More In-Depth Stock Guidance and Research
By David Jagielski - Mar 5, 2021 at 6:55AM

They may not double in value in just one day, but these stocks also aren't likely to suddenly crash either.

GameStop (GME -3.56%) has been rising in value again, but investors should resist the temptation to hop on the bandwagon. The business is a risky investment, and although you can earn a profit if you buy the stock at just the right time, you can also incur significant losses if you guess wrong and buy it close to a peak.

Rather than gamble on a stock with an uncertain future, investors are better off placing their trust (and their money) in companies that have much better growth prospects. Both Veeva Systems (VEEV 0.83%) and Amazon (AMZN 0.25%) have sustainable business models that are likely to generate returns for a long time. Here's a closer look at both companies and why they are worth investing in right now. 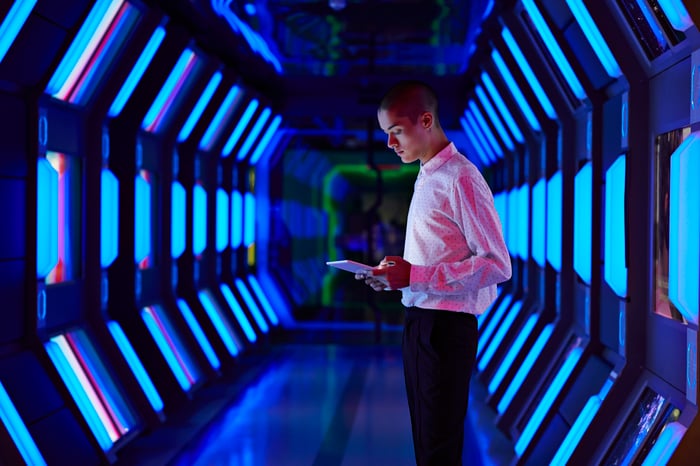 There are a few reasons why Veeva is an attractive growth stock (besides just rising sales numbers). The cloud-based software company generates excellent gross margins, which are typically north of 70%. I normally avoid businesses with low margins, because that means even if they generate impressive sales numbers, those sales won't lead to a big bump in the bottom line. And if profits aren't growing and there isn't a path to profitability, that could spell trouble for the company down the road. But that isn't the case with Veeva: Its profit margin is normally around 25%.

Another reason this is a solid buy is that much of Veeva's sales come from recurring customers, which can generate long-term stability. On March 2, Veeva released its fourth-quarter earnings for the period ending Jan. 31 and sales during the period totaled $396.8 million, growing by 27% year over year. Of that total, $322.8 million in revenue, or 81% of its top line, was from recurring subscription services. At the end of the fiscal year, Veeva had 993 customers, up 15% from the previous year.

As businesses look to simplify their operations and become more efficient by reducing expenses amid the COVID-19 pandemic, there could be even more growth for Veeva ahead. Next quarter, the company is forecasting revenue to climb as high as $410 million. Through Veeva and its customer relationship management software, healthcare companies (which Veeva targets) can gain insights into their customers and make the most of their communications with them, without taking up a huge amount of time. Clients that Veeva obtains during the pandemic aren't likely to drop off even after the crisis ends, as they will want to continue to benefit from those cost savings and efficiencies.

Over the past year, the stock has risen 76%, soaring past the S&P 500 and its 26% gains during that time. And it's likely to keep on rising. With strong sales numbers, great margins, and a high rate of repeat sales, I think that Veeva is one of the better growth stocks out there today.

One of the obvious trends of the pandemic is the surge in online sales. It hasn't been just e-commerce companies like Amazon or Shopify that have been performing well, but even businesses like Target, Home Depot, and Walmart have seen their online sales double as a result of consumers staying at home.

In 2020, Amazon reported net sales of $386.1 billion, which grew at a rate of 38% from the previous year. And its profits of $21.3 billion were up an impressive 84%. One of the intriguing aspects about Amazon that makes it a hot growth stock is that it is always looking for ways to expand and grow into new areas beyond its core business. From getting into the grocery business through its acquisition of Whole Foods in 2017 to launching Amazon Pharmacy a few months ago, Amazon has shown that it is willing to cross into other industries to help grow its operations.

However, sales from its online stores continue to be Amazon's bread and butter, accounting for half of the company's revenue. And it also continues to be an excellent source of growth, with sales from that segment increasing by 40% in 2020. But other segments are also doing well. Amazon Web Services (AWS) generated $45.4 billion in revenue in 2020 and was up 30% from the previous year. Subscription services, including Amazon Prime, grew at a slightly higher rate of 31%.

Amazon is a growth machine that investors shouldn't expect to slow down anytime soon. And if by some chance it does struggle to generate growth -- Amazon has the luxury of knowing that it could just buy another business if it needs to. With more than $42 billion in cash and cash equivalents as of the end of last year, it has nearly enough money to buy a company like Veeva, which has a market cap of around $44 billion, without needing to pull money from its investments or issue new shares.

The tech giant is always looking to grow, and with its vast financial resources, it isn't going to run out of opportunities to do so, making it an easy option for growth-oriented investors. Over the past year, its shares are up more than 58%.