Please ensure Javascript is enabled for purposes of website accessibility
Log In Help Join The Motley Fool
Free Article Join Over 1 Million Premium Members And Get More In-Depth Stock Guidance and Research
By Rick Munarriz - Mar 5, 2021 at 11:00AM

It's probably going to cost you a lot more cheese the next time you visit Mickey Mouse's original theme park.

There's a supply-and-demand game going on at Walt Disney's (DIS -0.71%) original theme park resort, and the only thing for sure is that the House of Mouse is winning. Disney began selling tickets to A Touch of Disney on Thursday, a ticketed event where folks pay $75 for outdoor dining and indoor shopping opportunities at Disney's California Adventure. Even after extending its available dates, the tickets were snapped up quickly.

A Touch of Disney selling out is great. If folks are willing to pay Disney $75 just for the chance to experience a sliver (a touch, if you will) of a nostalgic theme park experience, just imagine how much they will be willing to pay when the actual rides and attractions are open. A day at Disneyland was never cheap, but it's probably about to get a lot more expensive. 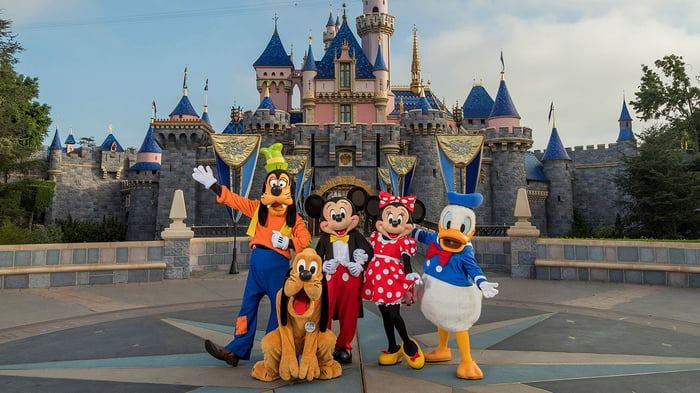 The writing is on the wall. Speaking at an analyst conference earlier this week, CEO Bob Chapek referred to a "better guest experience" when Disneyland reopens. With both of the resort's parks likely to be initially catering to a smaller audience, Disney will obviously want the folks willing to pay the most and spend the most once they get through the turnstiles.

It was a telltale sign when Disneyland ended its annual-pass program in January, refunding existing pass holders (a sharp contrast to Florida's Disney World, which merely stopped selling new passes). The days of paying $2 to $5 a day for unlimited access to Disneyland are over. Single-day ticket pricing will inevitably shoot higher at Disneyland, just as it may at Disney World later this year when that resort kicks off its 18-month celebration to commemorate its debut 50 years ago.

It won't always be that way, of course. Eventually the gated attractions will be back at normal capacity. There will be hotel vacancies to fill during seasonal and economic lulls. One can even argue that $75 for the chance to spend a few hours strolling through Disneyland's less popular park isn't an entirely bad deal. It does include a $25 credit for food and nonalcoholic beverages. Parking is also included, but the value of that perk is naturally diluted by how many people are riding in together.

Disneyland will initially aim high on pricing, and you can't blame the Mickey Mouse logic. Thursday's sellout of a largely outdoor dining and shopping event is only going to make it feel more confident as it sets pricing policy for the full reopening. It will hold off bringing back annual passes for as long as possible, and it will be a shock if single-day tickets (especially when they will be the only way for visitors to come back) won't be priced markedly higher. Nostalgia isn't cheap, and the media giant knows this now more than ever.