Please ensure Javascript is enabled for purposes of website accessibility
Log In Help Join The Motley Fool
Free Article Join Over 1 Million Premium Members And Get More In-Depth Stock Guidance and Research
By Rich Smith - Mar 6, 2021 at 7:07AM

The space tourism company is not having the first quarter investors were hoping for, and its second quarter will probably be another disappointment.

As you've probably heard by now, space tourism company Virgin Galactic (SPCE 0.15%) delivered its fourth-quarter earnings last week. The news was not good -- and indeed, since the report was released, Virgin Galactic stock has fallen by 28% in just five trading days.

Mind you, nobody expected spectacular results. Because the company is still in the start-up phase of its life (or, in the jargon of Wall Street, "pre-revenue"), analysts didn't expect to see much, if anything, on its top line. With plenty of expenses and no revenue to offset them, investors were prepared to see losses of as much as $0.31 per share on the bottom line, too. And as it turned out, that's exactly what Virgin Galactic reported -- a $0.31 per share loss.

Yet Virgin Galactic still did manage to surprise the market in one respect. 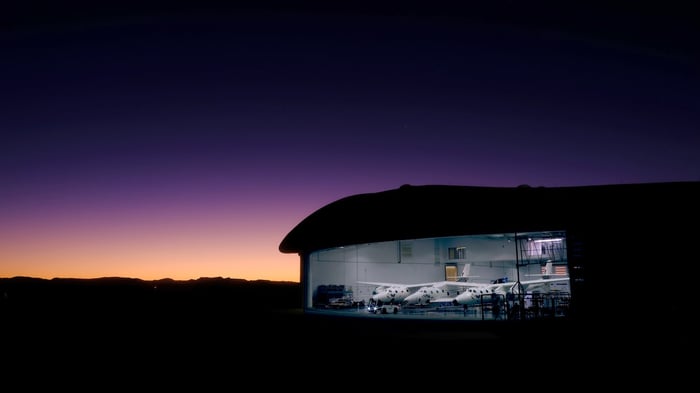 Sorry, Virgin Galactic passengers -- your flight has been delayed

Virgin Galactic headlined its report with three announcements. First, it advised that as it continues to prepare to begin commercial operations, it will "roll out" its second complete SpaceShipTwo spaceplane on March 30. Next, the company said it had scheduled a "revenue-generating" spaceflight with the Italian Air Force as a customer.

Then it dropped the bombshell: Its next rocket-powered spaceflight is "targeted to occur in May."

This is not good news. As recently as early February, Virgin Galactic was telling investors that it planned to hold the first of two final test flights of the VSS Unity spaceplane on or about Feb. 13. Furthermore, the company anticipated "opportunities to fly throughout the month," potentially permitting it to wrap up both planned test flights by the end of February, such that it could then proceed to fly company founder Sir Richard Branson to space -- and then begin accepting paying customers on board at long last!

Instead, just a day after saying it would run its test flight, Virgin Galactic postponed it again, saying only that it had "decided to allow more time for technical checks."

How serious was the problem that necessitated February's flight cancellation? How much more time did they think would be needed to fix it? Virgin Galactic still hasn't answered the first question, and only answered the second in its earnings report.

That answer, it seems, is: Virgin Galactic will need three more months before it can try to reach space again. Within the span of a couple of weeks, we went from Virgin Galactic potentially wrapping up its test program and being able to commence commercial operations -- and commence bringing in commercial revenue -- to confirming that not even the test program will be wrapped up before it delivers its first-quarter report.

That next report is due out in early May, by the way. But if Virgin Galactic doesn't even resume test flights until that month, and it still has two that it needs to complete, plus the Branson flight, before commercial operations can commence, it's almost a mathematical certainty that the company won't see any revenue before the third quarter at the earliest.

Worse, because Virgin Galactic can't know that those final tests will be successful in time for the next earnings report, it's highly unlikely that -- even three months from now -- management will be able to tell us when, precisely, it expects to be able to begin commercial operations.