Please ensure Javascript is enabled for purposes of website accessibility
Log In Help Join The Motley Fool
Free Article Join Over 1 Million Premium Members And Get More In-Depth Stock Guidance and Research
By Jason Hawthorne - Mar 6, 2021 at 6:50AM

A flaw in the logic behind a big sell-off may lead to a big surprise sometime in 2021.

Worldwide, vaccines prevent more than three million deaths each year among children who would have otherwise succumbed to tetanus, diphtheria, pertussis, measles, and other diseases. Still, many people are wary of vaccines, and most children are at best reluctant recipients. But once we get past vaccine hesitancy, logistics and refrigeration are the factors that prevent many in the most impoverished areas from getting inoculated.

Vaxart (VXRT 7.14%) has a plan to address the challenge, but a recent phase 1 readout crushed the stock. Is all the negativity deserved, or could it just be a short-term phenomenon? In other words, where might the company be in 12 months? 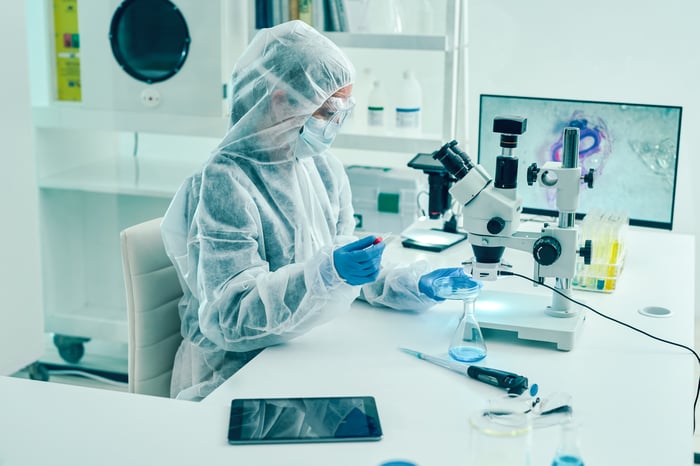 When Vaxart released the preliminary data from its phase 1 trial for VXA-CoV2-1, the company's oral COVID-19 tablet vaccine candidate, the headline of the press release touted positive results. Management went so far as to express increased confidence in the drug and in the tablet vaccine platform overall. Wall Street disagreed, and investors sent the shares down 60%.

It's possible that both reactions made sense. The purpose of the phase 1 study is to determine safe dosing levels, not to evaluate efficacy. In that respect, VXA-CoV2-1 met its goal. There were no severe adverse events among the 45 participants dosed. However, based on the information, investors understandably sold the stock. Unlike the Pfizer (PFE -0.23%) and Moderna (MRNA 4.97%) vaccines, Vaxart's drug did not produce detectable neutralizing antibodies. To shareholders expecting to see proof that the tablet would protect people from COVID, the results looked like a failure. Still, the company announced that the drug would move to phase 2 in the second quarter of this year. Despite the initial reaction, better news could be on the horizon for shareholders.

So there's a chance?

A case can be made that the way to determine efficacy of an oral vaccine is different than for an injectable one. For example, in the COVID-19 vaccines that rely on messenger RNA (mRNA), dendritic cells use the mRNA instructions to make the spike protein that is associated with the SARS-CoV-2 virus. The immune system then begins to produce antibodies and fight off the perceived threat, remembering what it looked like in case it ever needs to fight the battle again.

In mucosal immunity, the kind Vaxart relies on, a broad protective response is generated in the nose, mouth, lungs, and intestines. This is a different type of immune response that isn't going to spur the same immune cells into action as an injectable vaccine. Also unlike other COVID vaccines, the Vaxart candidate targets both the S-protein (spike) as well as the N-protein (nucleocapsid). This could actually help better fight variants of the SARS-CoV-2 virus -- the vaccines authorized to date were developed to focus specifically on the spike protein. Vaxart's approach could make its candidate the best able to handle new strains.

The fallout from Vaxart's phase 1 readout was over the lack of neutralizing antibodies detected in participants who received the company's drug. That begs the question, should they have been expected? In a phase 2 trial, Sanofi's (SNY 1.96%) market-leading injectable Fluzone resulted in a roughly 155-fold increase in neutralizing antibodies compared to only 6-fold for Vaxart's influenza tablet vaccine candidate. Despite this, the tablet provided at least as much protection against influenza as FluZone. This should be a signal to investors that using the same criteria to judge the company's COVID candidate as they did for Moderna and Pfizer is unwise.

Management just provided a business update reiterating the timeline for phase 2 trials and emphasizing the different criteria that should be used to judge mucosal immunity. Further, they highlighted some key differences in the type of immune response and how the Vaxart candidate may actually provide broader, longer-lasting protection.

Vaxart has other programs in its pipeline, but a year ago the stock traded for a little more than $1 per share. It proceeded to spike as high as $25 last month on excitement of successful results. If its tablet COVID vaccine isn't successful in phase 2, expect the stock to complete the round trip back to the dollar menu.

That prospect should be enough to scare off risk-averse investors. However, phase 2 will study people who have previously been exposed to the vaccine or the disease, and results could surprise Wall Street if it doesn't catch on to the parallels with the influenza trial before then.

Although it is risky, buying shares of Vaxart may be worth it for the potential payoff. A year from now, shareholders who dug a little deeper might look smart in hindsight.