Please ensure Javascript is enabled for purposes of website accessibility
Log In Help Join The Motley Fool
Free Article Join Over 1 Million Premium Members And Get More In-Depth Stock Guidance and Research
By Billy Duberstein - Mar 6, 2021 at 10:15AM

The Canadian pot stock rose amid a Reddit-fueled rally and positive earnings results from Tilray, which will merge with Aphria next quarter.

Canadian cannabis stock Aphria (APHA) rose 46.2% in February, according to data provided by S&P Global Market Intelligence. February saw a lot of optimism around cannabis stocks, fueled in part by optimism over U.S. legalization, but also from Reddit message boards hyping up cannabis stocks, especially heavily shorted Canadian stocks that have languished over the past year.

While there wasn't much new news in February for Aphria, there was for Tilray (TLRY), which was caught up in the Reddit mania prior to its earnings release in mid-February. Aphria and Tilray announced they would be merging in an all-stock deal back in December, and they're set to close the merger in the second quarter, so Tilray's movements affect Aphria's stock price. 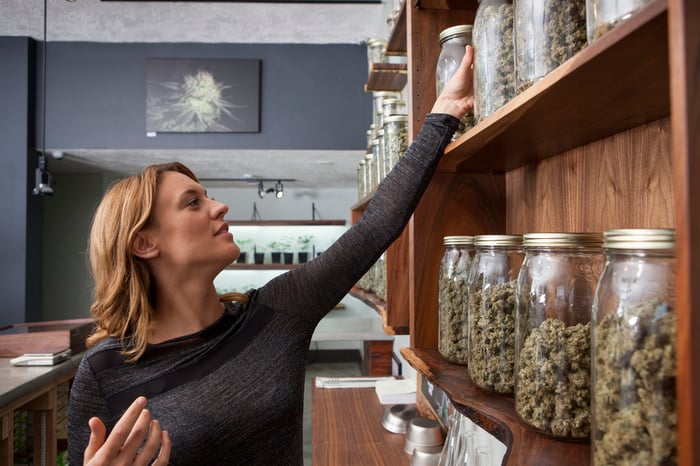 Tilray began the year with a very high short interest -- 48% -- according to S3 Partners. Highly shorted stocks had been the target of Reddit traders. Cannabis stocks have also received a lot of interest from Robinhood traders since the Democrats won the U.S. Senate in early January, even though it's unclear how much Canadian exporters would benefit from U.S. legalization.

Still, Robinhood traders are unable to buy shares of U.S. multistate operators (MSOs), which trade either in Canada or over the counter in the U.S., so many piled into the fully legal Canadian companies that trade on major U.S. exchanges. Tilray combined the two, and voila: a big spike in the share price.

In terms of results, Tilray actually posted better-than-expected financials in February. Revenue rose 20.5% in its fourth quarter of 2020, which ended Dec. 31, and 26% for the full calendar year. However, Tilray continues to post significant operating losses, showing the problems with the crowded Canadian market. For its part, Aphria released its report for the second quarter of fiscal 2021, which ended Nov. 30, 2020, in January. It posted 33% revenue growth, but like Tilray, it also posted hefty operating losses.

Both stocks have sold off hard in the early part of March, as rising long-term bond rates have crimped valuations for companies that are currently unprofitable. So it's good news that Aphria and Tilray forecast 100 million Canadian dollars ($78 million) in merger synergies, which should benefit the combined company's bottom line. The "new" Tilray will also have the highest total revenue of any global cannabis company -- at least for now, as U.S. MSOs are growing much faster and catching up quickly.

Of course, longer-term, the value of both stocks will be determined by how the companies perform as a combined entity after the merger closes. I'd still suggest looking into the healthier U.S. MSOs, if you have access to OTC stocks at your broker.