Please ensure Javascript is enabled for purposes of website accessibility
Log In Help Join The Motley Fool
Free Article Join Over 1 Million Premium Members And Get More In-Depth Stock Guidance and Research
By Lou Whiteman - Updated Mar 7, 2021 at 9:57AM

The company is set up to perform well as the pandemic recedes.

Marriott International (MAR 6.99%) shareholders were dealt a blow in February when the hotel company announced the unexpected passing of CEO Arne Sorenson. But the company's quarterly results, announced just days later, were a reminder of what a strong business the late CEO helped build.

The strength of those results, coupled with growing optimism that the pandemic will soon be over, helped push shares of Marriott up 27.3% for the month, according to data provided by S&P Global Market Intelligence.

Sorenson had been diagnosed with pancreatic cancer in 2019, and early in February said he would be temporarily reducing his workload, but the death still caught investors off guard. Sorenson had been with Marriott since 1996, serving as CEO since 2012, and was credited with guiding the company through a period of growth that built Marriott into one of the top collections of global hotel brands. 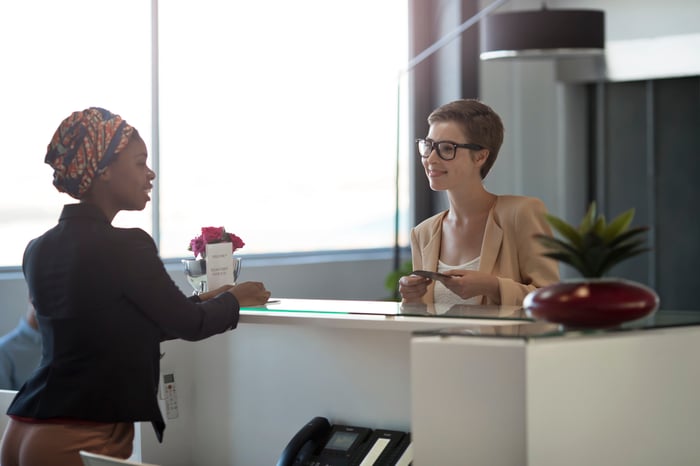 His replacement, Anthony Capuano, has big shoes to fill, but so far investors appear to have looked past whatever uncertainty the leadership change might cause and focused instead on the prospects for Marriott's business. In mid-February, the company reported fourth-quarter earnings that beat analyst expectations by one penny per share, and management said that while COVID-19 "will continue to be material" to results, Marriott's "financial condition is strong."

Marriott added nearly 63,000 rooms globally in 2020, and during the post-earnings call with investors management said it is beginning to see some momentum for special corporate bookings and group bookings for 2022 and beyond. About a half-dozen Wall Street banks either upgraded the shares or raised their price target following the earnings report, helping to drive the stock higher.

The hotel industry has been hit hard by the pandemic. Yet in February, Marriott was a beneficiary of the so-called "reopening trade" of investors buying into stocks that should do well as the vaccine becomes widespread and life returns to normal.

Marriott stock is about flat since the beginning of 2020, recovering most of what it lost when it fell nearly 60% in the early days of the pandemic.

Given how far the shares have climbed, it might be hard for Marriott to repeat the outsize gains it enjoyed in February in the months to come. But this remains a best-in-class operator that should deliver for investors for years to come.