Please ensure Javascript is enabled for purposes of website accessibility
Log In Help Join The Motley Fool
Free Article Join Over 1 Million Premium Members And Get More In-Depth Stock Guidance and Research
By Dave Kovaleski - Updated Mar 8, 2021 at 11:46AM

There are several reasons why the credit card giant is a good buy.

Mastercard (MA 1.19%) has been one of the best-performing stocks over the past decade. For the 10-year period ended Dec. 31, 2020, Mastercard posted an annualized return of 31.9%. You'll find relatively few companies of that stature that had that kind of performance.

Of course, as the disclaimer goes, past performance is no guarantee of future results, but as the second-largest payments processor in the world, Mastercard is well positioned to generate strong returns over the next decade, too. If you haven't bought Mastercard yet, consider its efficiency, its earnings power, and the major growth opportunities that lie ahead. 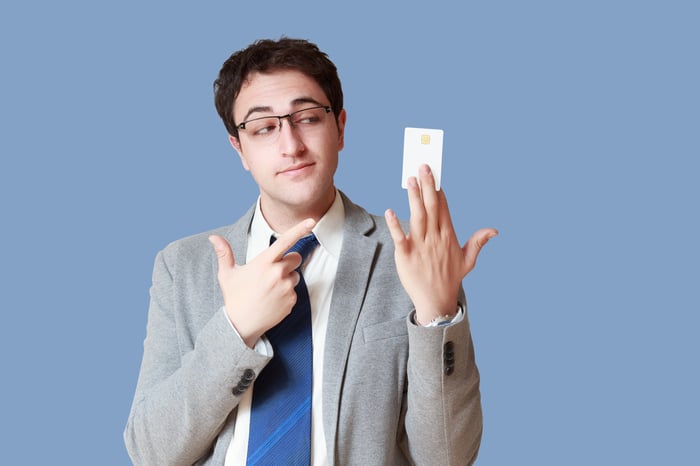 All things considered, Mastercard had a pretty good year for investors in 2020. The stock price returned 20% for the year, despite the pandemic's effect on consumer spending, and it outperformed its chief rival, Visa, which was up 17% in 2020.

In the fourth quarter, net revenue was down 7% year over year to $4.1 billion, due primarily to a 29% decrease in cross-border volume, which was largely due to lower travel spending. But there were positive signs as gross dollar volume, the total amount of purchases made with Mastercard-branded cards, was up 1% year over year, while switched transactions fees, which cover clearing and settlement, jumped 4% in the quarter over the previous year.

One major reason to like Mastercard is its efficiency. Even in a difficult year, it had an operating margin of 52.8% in 2020, which was down from 57.2% in 2019. It primarily makes money on fees from transactions, so there is not a lot of overhead. Its return on equity (ROE, earnings divided by shareholder equity) is a ridiculous 102%, which means that for every dollar of shareholder equity, Mastercard is making more than a dollar in profit.

Consider this: The average ROE on the S&P 500 in the fourth quarter was about 11%, and historically it's around 14%. Visa's ROE, while high, is around 30%. This should give investors a sense of how well-run and efficient Mastercard is. That leaves the company with a lot of cash and capital to invest in its future growth.

As the world moves increasingly toward cashless payments, accelerated by the pandemic, there are tremendous growth opportunities for Mastercard.

The company is just scratching the surface of the $235 trillion payments market, as then-CEO Ajay Banga laid out at the company's most recent investment community meeting in 2019. Card payments make up only about 13% of that total, while cash and checks make up 59% and automated clearing house (ACH) transactions, which involve moving money between banks and financial institutions, make up roughly 29%.

So while cash is still dominant, it will eventually be dethroned as e-commerce grows and cashless payments increase. A study released by Mastercard last June said about half of those surveyed plan to use less cash after the pandemic, and 70% said the shift to digital payments will become permanent.

Mastercard has made some investments in the past year to expand its capabilities and capture some of this large and growing market. In November, Mastercard acquired Finicity, a fintech that provides open banking services. Through open banking, an individual's financial data can be easily shared (with their permission) with outside third parties, like banks and finance companies. In essence, it allows customers to access, use, and control their financial data as they see fit. The open banking market is expected to grow six-fold to $43 billion by 2026, according to a recent study.

And in March, Mastercard finalized a deal to buy the corporate service business of Nets, a company that provides clearing and settlement, real-time payment, and e-invoicing to expand its presence in business-to-business payments.

So, with the tailwinds from the cashless trend, its excellent operational efficiency, and a long-term strategy to expand its market share, Mastercard is in prime position for another decade of growth.