Please ensure Javascript is enabled for purposes of website accessibility
Log In Help Join The Motley Fool
Free Article Join Over 1 Million Premium Members And Get More In-Depth Stock Guidance and Research
By Billy Duberstein - Mar 8, 2021 at 10:03AM

This oil refiner, midstream pipeline owner, chemical producer, and marketing specialist rose along with a sunnier outlook for oil.

Shares of Phillips 66 (PSX -2.25%) rose 22.5% in February, according to data provided by S&P Global Market Intelligence. Phillips isn't an oil producer, but its midstream and downstream operations are still heavily affected by the outlook for oil-derived product demand and somewhat by oil prices.

Phillips actually reported its fourth-quarter earnings results at the end of January, and its earnings declined more than analysts expected. However, in February, optimism over the vaccine rollout and economic reopening caused oil prices to rise, and Phillips along with them. 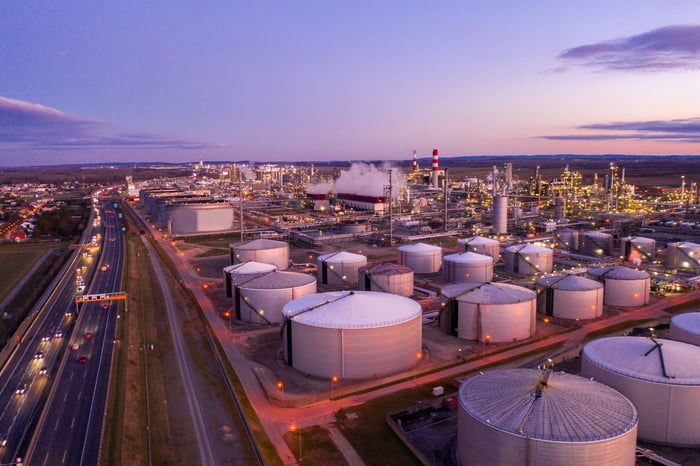 As a result of the COVID-19 pandemic, many of Phillips' energy businesses were heavily affected. Most notably, its refining plants took a massive hit, as lower demand for oil during lockdowns caused Phillips' facilities to run a lower capacity utilization. Refining profits swung from an adjusted profit of $1.95 billion in 2019 to a whopping $3.33 billion loss in 2020, causing the company's overall results to swing from a $3.66 billion profit in 2019 to a $382 million loss in 2020. The company also took some massive asset impairment charges, making its losses according to generally accepted accounting principles (GAAP) an even greater $3.98 billion.

Even though economies are starting to reopen, OPEC+, a coalition of oil producers from the Middle East and Russia, has maintained its supply discipline instituted during 2020. At the same time, demand appears to be recovering, especially from China. Since February, the price of crude is up about 30% to about $67, well above pre-pandemic levels.

Even though last year was brutal, Phillips is one of the more risk-off ways to play oil. The company has a relatively good balance sheet among pipeline and downstream companies, and was able to maintain its dividend throughout last year, as trying as it was, while also maintaining an investment-grade credit rating. Today, Phillips' dividend yields 4.3%, higher than much of the market, but significantly lower than just a few months ago, and the stock is perhaps less attractive now after its recent rise.

If you're looking to play a continued spike in oil prices, it may be a better idea to look at upstream oil producers. Refiners like Phillips depend on demand for end-use products, but really make margins based on the spread between oil prices and end-use refined products. So, while demand for things like jet fuel, gasoline, and other refined products are great for Phillips as the economy reopens, Phillips is not purely correlated with the price of oil, even though it has been over the past month.