Please ensure Javascript is enabled for purposes of website accessibility
Log In Help Join The Motley Fool
Free Article Join Over 1 Million Premium Members And Get More In-Depth Stock Guidance and Research
By Sushree Mohanty - Mar 9, 2021 at 6:45AM

As the cannabis industry heats up, this pot company's growth prospects are looking more and more attractive.

Cannabis stocks have had a rough couple of years. The sector's benchmark fund, the Horizons Marijuana Life Sciences ETF, spent most of 2019 and early 2020 sinking, and that period was followed by one during which it largely traded sideways.

But these once-dormant investments began to heat up again in late 2020 and early 2021. And rather than the Canadian players, it's been the U.S. pot companies that are performing especially well. Optimism about the industry's potential and renewed hopes that Congress may act to legalize marijuana at the federal level have sent these stocks higher.

Amid all this bullishness, my eye is on one particular marijuana stock: Illinois-based Cresco Labs (CRLBF -2.35%). Cresco's outstanding third-quarter report revealed impressive growth prospects. Over the past 12 months, the pot stock has gained almost 240%, wildly outperforming the S&P 500, which is up by 30% over the same period. Let's review Cresco's results from last quarter, and consider what investors can expect from the company this year. 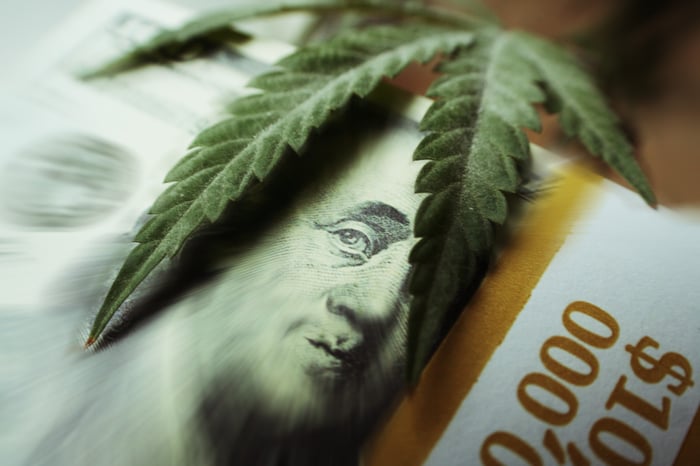 It's accurate to say that, by and large, it is difficult for marijuana companies to make money. Even though conditions in 2020 favored cannabis sales, the spectacular revenue growth that occurred wasn't enough for many of them to get out of the red. Those efforts have been further hindered by the companies' turned attention to cost-cutting measures and difficulties gaining access to capital.

But Cresco Labs is an exception. The company has worked hard to expand its footprints in key markets. It sells cannabis products in nine U.S. states, has earned licenses for 15 production facilities and 29 retail outlets, and has already achieved high revenue growth and positive EBITDA (earnings before interest, tax, depreciation, and amortization). After November's election, a total of 35 states and the District of Columbia allow cannabis use for medical purposes, while 15 states and D.C. have legalized recreational cannabis use. Just in the past few weeks, legislatures in Virginia and New Jersey voted to legalize the recreational use of the drug.

Being a vertically integrated multistate cannabis operator gives Cresco Labs control over its supply chain, an advantage that has been particularly valuable during the pandemic. That control over the product journey from factory to shelf ultimately prevented its revenue from taking a hit. Instead, in fact, its top-line jumped by 323% year over year in the third quarter, from $36.2 million to $153.2 million.

More importantly, Cresco Labs is already profitable -- a relatively rare attribute among marijuana companies. The staggering top-line gains drove another quarter of positive adjusted EBITDA, which sprung to $52 million from $11 million in the year-ago period. Lower costs -- especially the dip in selling, general, and administrative (SG&A) expenses to 30% of total revenue from 70% a year prior -- also contributed to its bottom-line improvements. Consistently positive EBITDA is a sign that a company handles its operating expenses well. This effort showed on the bottom line: Cresco reported a net income of $4.9 million in Q3.

Voters in Arizona, Montana, New Jersey, and South Dakota legalized recreational marijuana use in November. With Cresco's stable cash position and its growing revenues and EBITDA, it will be relatively easy for the profitable company to make even more money in these new markets. Those moves are already underway: On Feb. 1, Cresco Labs announced that it had received a green light from the Arizona Department of Health Services to sell recreational cannabis products in the state.

3. The growth road ahead looks smooth

Cresco Labs is reaping the benefits of its strategy to invest in key markets like California and Illinois. California is a relatively mature market in the cannabis space. With a population of 39 million, California is the largest market for cannabis, by far, and has grown from $1.4 billion in marijuana sales in 2018 to a whopping $4.4 billion in 2020.

By contrast, recreational marijuana use only became legal in Illinois -- Cresco's home state -- on Jan. 1, 2020. In the first month of legalization, Illinois generated $40 million and monthly sales rose steadily from there to reach $87 million by December 2020. Legal cannabis sales ultimately totaled more than $1 billion last year in the state. Cresco opened its tenth dispensary in Illinois in September.

Cresco ended the third quarter with $58 million in cash and cash equivalents and no debt. Its cash balance includes $50 million in tenant improvement allowances -- money provided by a landlord to cover a tenant's construction costs. As discussed in the earnings call, Cresco's management plans to use those funds to expand cultivation facilities in Michigan, Massachusetts, and Ohio, which it will be able to do without any need to raise additional capital.

A pot stock you shouldn't ignore

Cresco Labs has a lot to look forward to -- but it's also enjoyed some amazing achievements in the U.S. market for cannabis already. Creso Labs is in a comfortable financial situation with strong, consistent rising revenues and positive earnings, as well as a wide expansionary scope. All of these things are allowing the company to strike while the iron is hot in the industry. Even without a near-term federal legalization or decriminalization scenario, Cresco remains an excellent cannabis stock for investors seeking strong long-term returns.