Please ensure Javascript is enabled for purposes of website accessibility
Log In Help Join The Motley Fool
Free Article Join Over 1 Million Premium Members And Get More In-Depth Stock Guidance and Research
By Parkev Tatevosian - Mar 9, 2021 at 8:33AM

The meme stock is making a lot of noise, but these two stocks are better for your financial health.

GameStop (GME -5.31%) stock is on the rise again. After falling precipitously from its intraday highs over $400 to less than $40, it was shooting back up on Monday. All this price movement in a matter of months can make an investor queasy. It's better to invest in stocks that are less volatile and have more promising long-term prospects.

Facebook (FB -8.88%) and Peloton Interactive (PTON -5.51%) are each less volatile and have bright futures ahead of them. The former is the leading social media platform on the planet, claiming 2 billion members. The latter makes and sells exercise equipment that's so popular you will have to wait months to get your hands on one. Here's a look at why you can ignore the noise around GameStop and buy Facebook and Peloton instead. 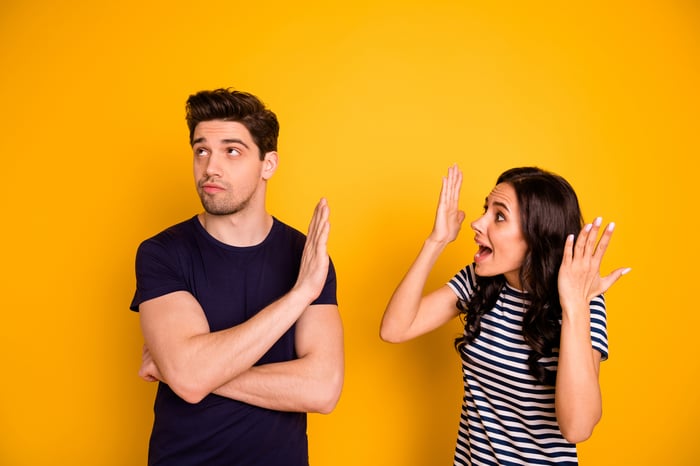 More than 3 billion people visit one of Facebook's family of apps at least once per month. That's nearly half of the world's population accessible to advertisers through a relationship with one company. What's more, the social media giant offers marketers the ability to choose their campaigns' scope. The range of options -- global or local, male or female, older or younger -- and the sheer size of Facebook's user base make it one of the most cost-effective sources for businesses looking to reach consumers.

That could be in part what is causing average revenue per user (ARPU) to rise as it is. In Facebook's fourth quarter, ARPU increased by 16.8% from last year to reach $8.62. ARPU can be increased by showing more ads to users or raising the price per ad that marketers are charged. Facebook controls the number of ads you see when you log on to one of its apps. If it wants to increase its apps' monetization, it can simply increase the frequency of ads. Of course, it needs to balance the number of ads shown with the user experience -- too many ads could discourage you from logging on. Still, the fact that it has 3.3 billion people who log on monthly and that the figure increased by 300 million in 2020 highlights plenty of room to increase monetization without losing platform visits.

Moreover, all this can be had at a bargain price. Facebook is trading at a discount to its social media peers Twitter, Pinterest, and Snap when measured by the forward price to sales ratio (see chart). 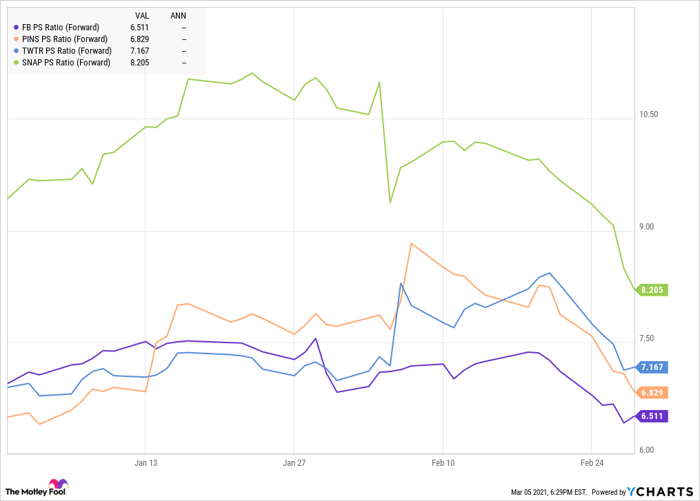 Peloton's connected exercising equipment, which comes with a subscription to live and recorded workouts, is a hit with health-conscious individuals. Sales are soaring, and new customers who want to get their hands on one have to wait up to 10 weeks for delivery. That is the problem Peloton faces -- too much demand and not enough supply. However, the company made two major acquisitions, one in late 2020 and one in 2019, to increase manufacturing capacity and balance supply with demand. As it brings these facilities online, it could add fuel to the fire that has already increased revenue by 100% in each of the last six years.

Indeed, Peloton is guiding investors to expect revenue of over $4 billion in 2021. If it hits that target, it will be yet another year of over 100% revenue growth. The rapidly expanding business is starting to become profitable. In the six months ended Dec. 31, Peloton generated net income of $132.8 million compared to a loss of $105.2 million for the same period last year. The wheels are turning fast for this growth stock, and investors can feel good about starting a position in Peloton.

In fact, investors can ignore the hype around GameStop stock and buy Facebook and Peloton stock instead.