Please ensure Javascript is enabled for purposes of website accessibility
Log In Help Join The Motley Fool
Free Article Join Over 1 Million Premium Members And Get More In-Depth Stock Guidance and Research
By Herve Blandin - Mar 9, 2021 at 8:00AM

The data specialist posted confusing fiscal fourth-quarter results because of its transition to the cloud.

Because of the accounting shenanigans that transpired during its transition from a license-based on-premises offering to a subscription-based cloud model, Splunk (SPLK -2.07%) posted confusing fiscal fourth-quarter results last week. Despite a strong and reassuring performance from its cloud business, revenue declined year over year.

So at more than 30% below its summer all-time highs, is Splunk stock a buy?

Splunk goes from on-premises to the cloud 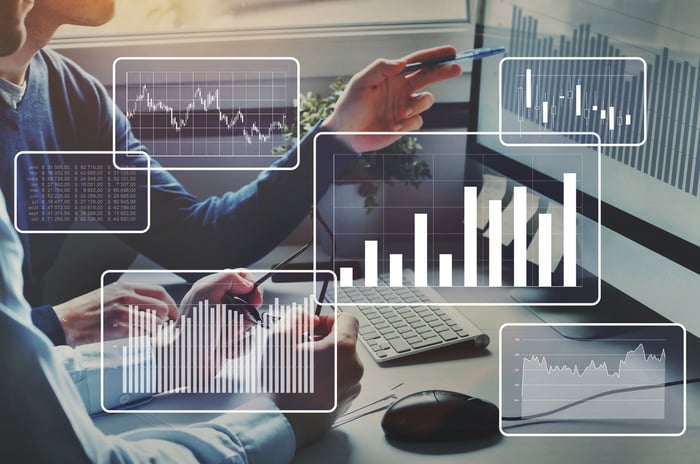 Thanks to internal developments and acquisitions over the last several years, the company has expanded its business with extra security and monitoring capabilities. Splunk also developed an observability platform to help developers better measure the performance and health of their systems and applications.

These decisions made sense given the significant synergies and cross-selling opportunities between these different products, which can be integrated and sold under a unified platform.

But Splunk's most important transition remains the shift to the cloud it initiated three years ago. With the rise of cloud computing, many competitors offered cloud-native monitoring and observability capabilities Splunk couldn't compete with. For instance, the monitoring specialist Datadog generated impressive top-line growth, going from $101 million in 2017 to $603 million last year, as it captured new cloud opportunities thanks to its user-friendly integrated monitoring and observability platform.

Financial consequences of the cloud transition

So Splunk developed a competitive cloud-native offering to remain relevant in cloud computing environments. So far, the transition has gone well -- the research outfit GigaOm cited Splunk as a leader in cloud observability in its 2021 report.

But that transition has had drawbacks for the company's results under generally accepted accounting principles (GAAP). Instead of selling licenses and generating large upfront payments that are immediately recognized as revenue, cloud service subscriptions are recognized over time. Thus, as long as subscriptions are still replacing licenses, Splunk will report weak revenue growth. And with licenses still representing a large portion of total revenue, that transition will span over several extra quarters.

Indeed, during the last quarter revenue dropped 6% year over year to $745 million, as 72% year-over-year growth in cloud (ratable) revenue to $171 million failed to fully offset the 22% decline to $406 million in revenue from licenses.

In addition, the company's transition to the cloud implies lower gross margins. In contrast with its legacy license business, which requires customers to support the costs of their computing infrastructure to run Splunk's software, Splunk must provide -- and pay for -- the infrastructure that delivers its cloud-based solutions.

As a result, non-GAAP (adjusted) gross margin declined to 83% during the last quarter, down from 87% in the prior-year period, as growing cloud services led to a non-GAAP gross margin of 62%.

Granted, as its services scale up, management plans to improve cloud non-GAAP gross margins to at least 75% over the long term. But that remains well below the spectacular gross margins in the 90% area that the company generated with its legacy license business in the past.

Thus Splunk remains far from profitability. During its fiscal year 2021, ending on Jan. 31, GAAP net losses increased to $908 million, compared to $337 million the year before, partly because of declining revenue and increasing operating costs. Looking forward, reduced gross margins associated with cloud services will represent an extra obstacle standing in the way of profitability.

Splunk stock is not a bargain yet

In addition to those financial challenges, Splunk's transition to the cloud remains a work in progress. And because of uncertainties, management didn't provide a full-year outlook.

So at an enterprise value-to-sales ratio of 10.6, the tech stock remains pricey. It doesn't look expensive compared to the lofty valuations of high-growth cloud-native competitors. But those competitors don't have to deal with legacy on-premises businesses, and Splunk's valuation still sets strong expectations that have yet to be borne out.

Besides, other cloud players have been integrating security, monitoring, and observability capabilities into unified data platforms that increasingly compete with Splunk's offering. For instance, Datadog announced new cybersecurity capabilities last year. And the endpoint protection specialist CrowdStrike recently agreed to acquire the observability specialist Humio to enhance its cybersecurity platform.

Thus, even at more than 30% below its all-time high from last summer, Splunk stock is still not a buy for me.