Please ensure Javascript is enabled for purposes of website accessibility
Log In Help Join The Motley Fool
Free Article Join Over 1 Million Premium Members And Get More In-Depth Stock Guidance and Research
By Brian Stoffel - Mar 9, 2021 at 9:31AM

With shares down 50%, I wasted no time buying in.

No one will blame you if the past few weeks have been nerve-wracking. While the market as a whole has been relatively steady, some of the most popular stocks on the Nasdaq Composite have been falling quickly.

Those of us who invest in technology stocks -- especially Software-as-a-Service (SaaS) ones -- have had a roller-coaster ride. One data point: The ARK Innovation ETF (ARKK -4.43%) -- which invests heavily in such stocks -- fell 25% in a matter of weeks.

But instead of panicking, I used the opportunity to buy shares of Unity Software (U -2.40%), a company that has all the characteristics of a winning stock. Here's why I say that. 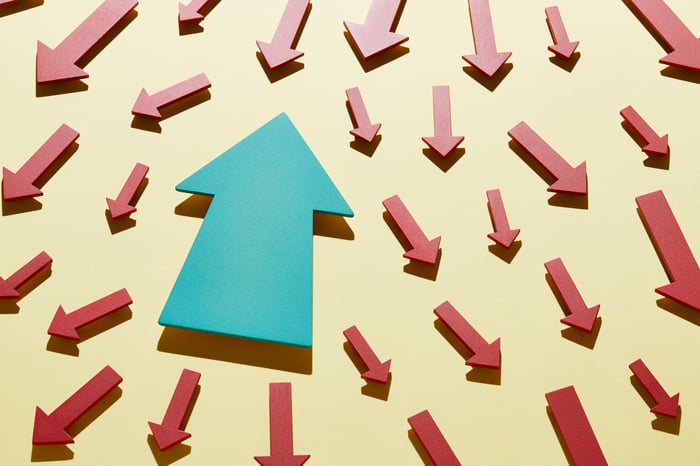 Over the past six years, I have developed my own framework for stock picking. Based on best-selling author Nassim Taleb's work, I have dubbed it the "Antifragile Framework." These are companies that, by design, I believe will get stronger because of chaos and the right amount of stress.

Last year, the highest-rated "antifragile" stocks averaged a tripling in share price! What did they all have in common?

As you'll see, Unity is strong in all three areas.

A quick intro to Unity

But before we get into the nuts and bolts, it's worth explaining what Unity does. Put simply: Its platform helps engineers bring interactive, 3-D technology to life.

Unsurprisingly, the main application for this technology is in gaming. In fact, at the end of 2020, a whopping 71% of the top 1,000 games in the world were made with Unity. That alone speaks volumes -- and helps explain how the company has been growing so quickly.

While that growth is impressive, management believes the total addressable market for Unity's platform inside of gaming will reach $16 billion by 2025. That leaves a long runway for growth.

Clearly, gaming is the "safe and reliable" part of Unity's business. Here are a few stats to demonstrate the strength of that business.

The first shows the number of customers paying Unity more than $100,000 per year. The second -- dollar-based net expansion -- measures the amount of revenue that existing customers spend with the company year after year. It filters out the effect of new customers on growth.

Crucially, these point to enormous switching costs. If you (and your employees) are familiar with Unity's platform, and rely on it for monetizing your games, it would take a Herculean effort on the part of Unity's competition to get customers to leave.

Just as important, however, is the fact that this technology can be applied outside of gaming. This is the "high-risk/high-reward" part of the barbell. It includes things like applications in architecture and engineering, the making of movies and animated shows, and autonomous driving.

In fact, Unity already has over 100 customers outside of gaming that provide at least $100,000 annually in revenue. As the ease and reliability of Unity's platform gain currency, this could grow rapidly: Management believes the opportunity outside of gaming could be worth $17 billion today -- more than gaming alone!

Next, I want to make sure a company can not only survive tough times, but get stronger -- financially -- from them. How is that possible? Companies can buy back their own shares at depressed prices, acquire distressed start-ups, or simply price the competition under the table -- losing the short-term battle but winning the war.

While it's true that Unity appears to be a huge money loser on paper (net losses of over $280 million last year), that's mostly due to accounting rules. As shown above, Unity is almost at break-even on a free cash flow basis. And when we look at the balance sheet, things are even more encouraging:

The bottom line: If tough times hit, Unity has more than enough financial strength to emerge from a downturn stronger than before.

Finally, I like looking at the "softer" variables: Who runs a company, how they are incentivized, and what employees think of the company culture. Unity has winning marks across the board: Founder-leaders, heavy insider ownership, and rave culture reviews.

Unity is worth a look

While I've sounded positively bullish throughout this piece, some caution is warranted. Even after falling nearly 50% from all-time highs, Unity still trades for over 20 times sales. It has also only been public for less than one year.

That's why it's always smart to buy in small portions. That's what I did. Today, Unity accounts for just over 2% of my real-life holdings. If you're looking for a SaaS company with a huge runway in front of it, I suggest you consider doing the same.