Please ensure Javascript is enabled for purposes of website accessibility
Log In Help Join The Motley Fool
Free Article Join Over 1 Million Premium Members And Get More In-Depth Stock Guidance and Research
By Jennifer Saibil - Mar 10, 2021 at 8:36AM

Even after its best year ever, PayPal is doing what it takes to keep on winning.

PayPal Holdings (PYPL 0.37%) is the pioneer among the fintech (financial technology) companies in operation, but it's also still a leader and as relevant as ever, largely because digital payments are as relevant as ever and becoming more popular for customers and retailers.

The year 2020 was a record one for PayPal as the pandemic forced more and more companies around the world to accelerate digital adoption to keep the economy going. PayPal was right in the middle of the action and this digital adoption acceleration is the biggest reason PayPal stock will keep on winning in 2021 and beyond.

The war on cash is fully mobilized

Spenders are increasingly relying on digital payments to make their purchases. Even as stores open after lockdowns, buyers are using contactless payments for quick and touch-free buying. That's huge for fintech operators who have invested in contactless technology. PayPal is focusing on cashless in-store payments as physical stores reopen to benefit from this trend. It sees 80% of its 2025 addressable market in stores. 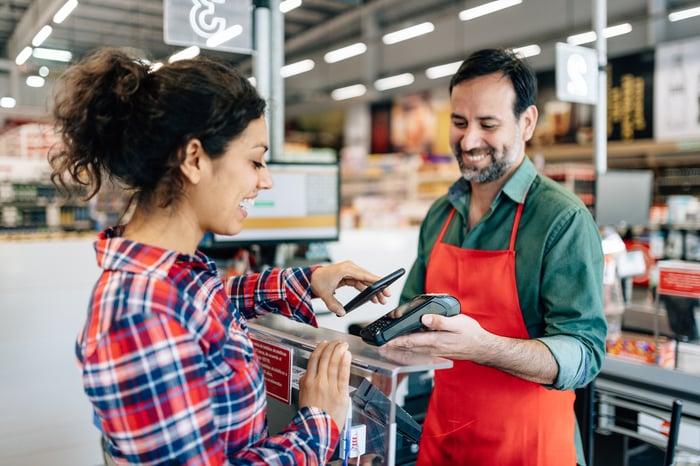 According to a McKinsey report, U.S. cash transactions decreased from 51% to 28% between 2010 and 2020. Global cash payments for 2020 (when finally compiled and reported) are expected to decrease by 4-5 percentage points from their 2019 rate of 69%. PayPal's services and expansion efforts are contributing to this change and benefiting from it.

PayPal operates two segments: individual accounts and merchant services. Both are being primed for cashless payments. To enhance its individual accounts side, PayPal is scaling its personal financial services platform with a more intuitive interface and greater functionality, especially for in-store use. On the merchant side, PayPal is signing up more stores -- such as CVS Health and Foot Locker -- to accept QR codes. In the fourth quarter, its codes were usable at more than 600,000 retail locations.

What has helped the company remain at the forefront of these changes is the fact that PayPal is a trusted brand. Recent online payments surveys indicate that people are 54% more willing to make a purchase from a company if PayPal was offered as a payment option.

PayPal is reaping the results

The company launched several new features in 2020, including QR code checkout, buy now, pay later short-term payment plans, and Bitcoin trading. Cryptocurrency is exploding in popularity, and account holders who trade cryptocurrency log in to their accounts twice the amount as those who don't, contributing to an increased usage of PayPal services.

Total payment volume (TPV) increased 36% in the fourth quarter to $277 billion, another record quarter despite lower volumes from travel and events purchases. Peer-to-peer payments increased 46% in Q4 and made up 28% of TPV. Venmo itself grew 60% to $47 billion.

Merchant services grew at a compound annual growth rate of 30% over the past four years for a total of $866 billion in 2020.

According to data from the company's February investor presentation, there was 17% digital market penetration in 2020, and PayPal expects that to increase to 24% by 2025. The company sees a $110 trillion addressable market and is aiming for $50 billion in 2025 revenue, more than double the 2020 total of $21 billion. It's starting with an expectation of 50 million new active accounts in 2021, and for revenue to grow 28% in the first quarter.

PayPal's stock price gained 112% in 2020 and was rising steeply in 2021, especially after the solid earnings report on Feb. 11. But the price slid after that and is currently trading about flat year-to-date. There was a combination of a general tech sell-off, a low vote of confidence from ARK investing, and perhaps a feeling that the price was running ahead of itself for a company that's past its high-growth stage.

But as sales and accounts keep climbing and digital payment options keep accelerating in importance, investors can be confident that PayPal is well-positioned to keep its spot as a fintech leader and to reward investors with high gains.