Please ensure Javascript is enabled for purposes of website accessibility
Log In Help Join The Motley Fool
Free Article Join Over 1 Million Premium Members And Get More In-Depth Stock Guidance and Research
By Courtney Carlsen - Mar 10, 2021 at 7:02AM

The payments company is changing the purchasing experience with its "buy now, pay later" business model. Should you add it to your portfolio?

Affirm Holdings (AFRM -11.09%) is taking on credit card companies by making the payment process more transparent, flexible, and forgiving, and not charging its customers late fees.

The fintech got off to a blistering start for its IPO investors, nearly doubling on its first day, although it's given back 18% since that first day. Despite its volatile start, the company is worth consideration as it aggressively grows its customer base. As Affirm makes waves and increases its market share, here's what you need to know about it.

A consumer-centric focus with its "buy now, pay later" model

Affirm's founders believed the consumer should be put first, which is why they created payment options that allow consumers to pay for purchases in fixed amounts, without any deferred interest. The company has partnered with thousands of retailers to offer its payment plans at checkout for their customers. So when you're buying something online from Walmart or Best Buy and you see an option to spread your payments over six months, Affirm is the company behind that service.

The company is helping to lead the "buy now, pay later" trend -- or BNPL for short -- which is the fastest-growing e-commerce payment method globally, according to Worldpay's 2020 Global Payments reports. The BNPL market share is expected to triple to 3% of the e-commerce payments market in North America by 2023, and up to 10% in emerging markets. 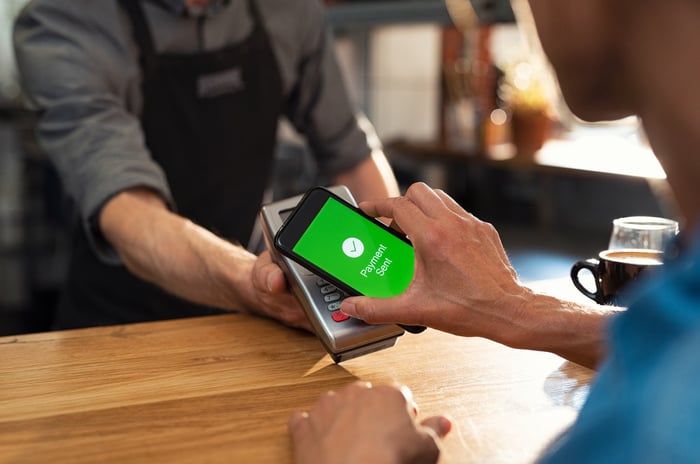 The disruptive payments company faces stiff competition from other BNPL players like Afterpay and PayPal, as well as legacy credit institutions like American Express and Discover. However, Affirm positions itself as an alternative to credit cards, saying that the industry is rife with "restrictive, predatory, and complex practices." Affirm believes in something different: a consumer-centric focus that favors simple, transparent payment solutions. And co-founder Max Levchin knows a thing or two about payment solutions, being one of the original co-founders of PayPal.

Payments can be a win-win for consumers and merchants. Consumers can win with flexible payment options that have no late fees -- something Afterpay and PayPal both charge consumers -- and merchants can win as they can increase sales and get data insights. Merchant sales are boosted by consumers' increased purchasing power -- including 0% APR loans -- at zero added cost for consumers. The company believes in building relationships based on trust, which is evident from its net promoter score of 78 -- a measure of customer experience where a score above 70 is considered excellent, and where the credit card industry average score is 30.

Putting consumers front and center is a noble idea, and it makes Affirm an intriguing company. That's why demand for the company's stock at its IPO was so high. Affirm originally targeted an initial share price of $33 to $38, investors eagerly pushed it up to $49. By the time the company began trading on the public exchanges, the stock was up over $90. Though the company's price-to-sales ratio around 34 (at Tuesday's prices) doesn't make it the most expensive tech stock, it's still high on the list. However, at the end of the day, what investors care about are results, so let's take a dive into the company's earnings.

Affirm posted revenue of $509.5 million for its fiscal year ending June 30, 2020, representing 93% growth from the year prior. Half of that revenue came from merchant network revenue -- fees that Affirm earns when its payment solution helps merchants close sales. The company has partnerships with 6,500 retailers, including Walmart, Target, Peloton Interactive, and Shopify, and earns fees based off its different payment products, with its 0% APR financing products paying out the most. Another 36.6% of its revenue is from the interest it charges consumers on its simple loans.

In its most recent quarterly earnings, the company reported revenue of $204 million for the quarter, up 57% from the same period last year, and an operating loss of $31.7 million, down from $32.6 million last year. The company also mentioned that it now has 4.5 million active customers, up 52% from last year, helping grow its gross merchandise volume (GMV) 55% to $2.1 billion.

The company's aggressive expansion efforts have included the acquisition of PayBright, a leading BNPL provider in Canada, as well as virtual card functionality that allows consumers to pay in physical stores on its app. The company also recently announced that it would offer physical debit cards, with CEO Levchin saying that the company's card is really an "anti-credit card" because of its transparent payment plans and lack of late fees.

In 2020 its GMV was $4.6 billion, representing less than 1% of all e-commerce sales. Going forward, the company guided 2021 GMV to be between $7.25 billion and $7.35 billion, which translates to 57% growth in volume year-over-year on the low end. With GMV increasing, revenue is expected to be $760 million to $780 million, but the company will continue to run at an operating loss of between $120 million and $130 million.

An intriguing company in an expanding market

Affirm has made huge strides in capitalizing on the BNPL trend. Its aggressive strategy is playing out well, with strong revenue and GMV growth in the past few years. As consumer preferences continue to shift to online shopping, Affirm is looking to capture more of this market share. The company's expansion into cards could be another growth driver as it seeks to capture a share of offline shopping as well.

Affirm is young and fast-growing, with a great leader in Max Levchin, who is more than familiar with what it takes to create a successful payments company. While I won't be diving into this stock right now due to its high valuation and volatile performance, Affirm is one company I will be watching closely going forward.