Please ensure Javascript is enabled for purposes of website accessibility
Log In Help Join The Motley Fool
Free Article Join Over 1 Million Premium Members And Get More In-Depth Stock Guidance and Research
By Rekha Khandelwal - Mar 10, 2021 at 7:33AM

A solar panel manufacturer, an oil and gas pipeline operator, and a mid-size utility offer more value than the market thinks right now.

By all measures, the stock market looks overvalued right now, and finding cheap stocks in such a market is a difficult task. But you can still find hidden gems if you know where to look. Here are three such stocks with the potential to reward you handsomely over the next several years that are getting overlooked right now.

Canadian Solar (CSIQ 2.19%) is a geographically diversified solar panel manufacturer and a developer of utility-scale solar power projects. The company earns nearly 45% of its revenue from the Americas, while Asia accounts for nearly a third of its revenue. Europe and other regions contribute the company's remaining revenue. The 20-year-old company boasts of a project development backlog of over 5 gigawatts (GW). It has steadily grown its revenue over the years.

Canadian Solar's projects development business has been doing pretty well recently. In the first nine months of 2020, its development segment generated $100 million in income from operations, at a gross margin of 32.2%. The company targets project sales of 1.8 GW to 2.3 GW in 2021. It expects annual projects sales GW to nearly double by 2024. By comparison, top competitor First Solar (NASDAQ: FSLR) is selling its projects development arm as it was generating lower returns than its panel manufacturing business. 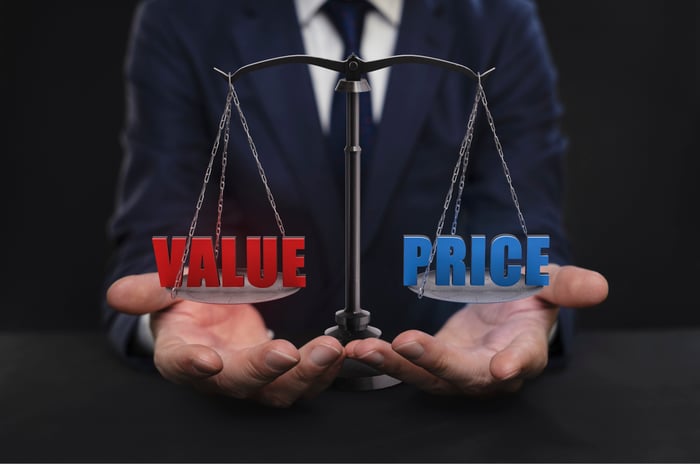 Projects development could be a key growth avenue for Canadian Solar. Its ability to integrate battery storage into solar projects will provide additional growth opportunities to the company. The segment's growth over the years, as well as the company's outlook for it, reflects Canadian Solar's edge in a quite competitive business.

Another key factor that differentiates Canadian Solar from its peers is its valuation. The stock is trading at a lower price-to-earnings multiple than First Solar or JinkoSolar. 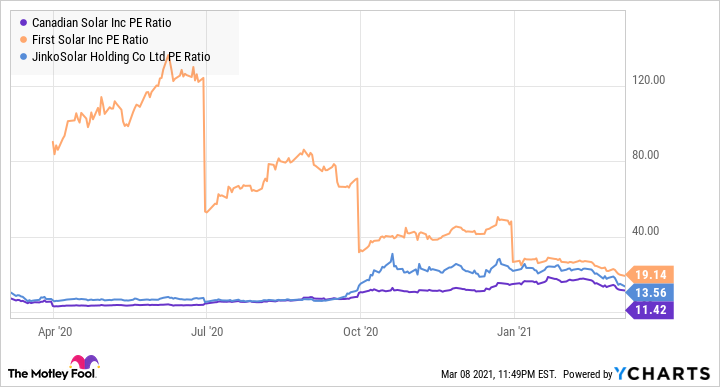 Canadian Solar has held up well so far, despite being in an extremely competitive industry. The company plans to expand its capacity and increase its level of vertical integration to grow its market share. If it succeeds in doing that, the valuation gap with peers would surely narrow.

Enterprise Products Partners (EPD 0.60%) is a dividend investor's dream stock. The MLP has raised its distributions for 22 years in a row. It is currently trading at an extremely attractive yield of 7.8%, well above its historical average yield. 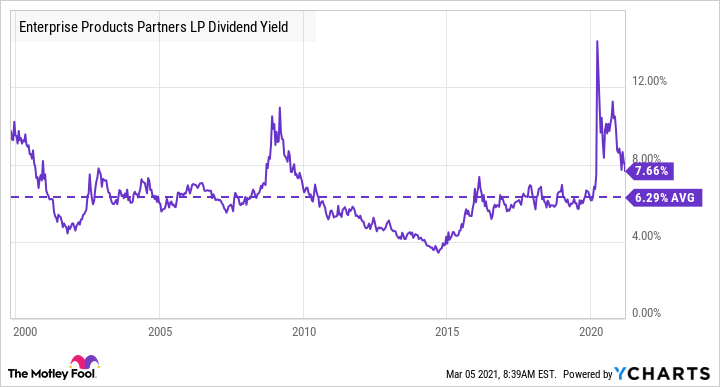 The volatility in oil and gas markets resulted in a steep rise in Enterprise Products Partners' yield. Though the yield has fallen from the highs of last year, it is still extremely attractive. While oil price volatility swung major oil companies into losses last year, Enterprise Products Partners posted far more resilient performance thanks to its fee-based operations. The company's distributable cash flow, which is the cash available for distribution payments, was $6.4 billion for the year -- only $200 million less than in 2019.

The company raised its fourth-quarter distribution by 1.1%. For the year, Enterprise Products' distributable cash flow was 1.6 times its distribution payments. That means its attractive yield is well-covered, too. Additionally, Enterprise Products has one of the strongest balance sheets among its peer group. Its debt-to-adjusted EBITDA ratio of 3.5 is one of the lowest among its peers.

The company has a project backlog of $1.6 billion for 2021. That should allow it to continue its distribution growth streak in the coming years. All told, Enterprise Products Partners is an attractive buy right now.

PPL Corp. (PPL -0.03%) is a mid-size regulated electric utility with operations in the U.S. and U.K. The utility has paid steadily rising dividends for more than two decades. In 2020, PPL's earnings from its U.K. business fell $0.01 per share to $1.33 per share, primarily due to the impact of COVID-19. However, U.K. regulations allow it to make up for last year's revenue shortfall in the coming year. PPL's per-share earnings fell 2% year-over-year, primarily due to the impacts of COVID-19. 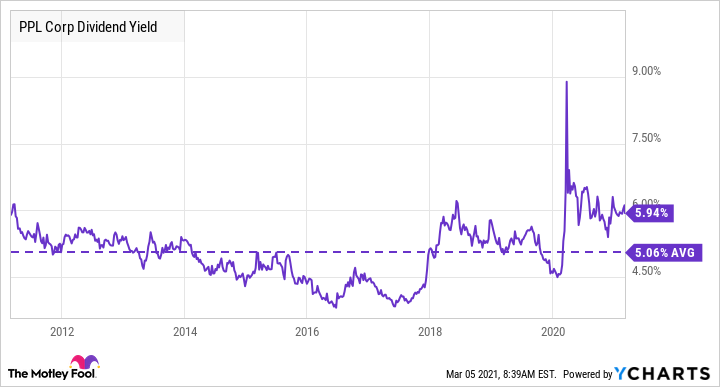 Further, PPL stock is trading at a price-to-earnings ratio of around 14.5. That's one of the lowest among similar-sized peers. 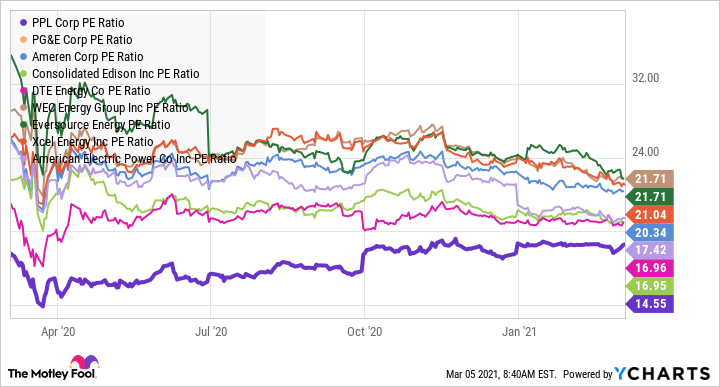 PPL's management believes that the valuation gap between PPL and its U.S. peers is largely due to its U.K. operations. Though PPL's U.K. operations are robust, earnings fluctuate a bit due to exchange rate variations.

To narrow this valuation gap and increase its focus on its U.S. operations, PPL announced its intention to sell its U.K. business in August last year. The company believes that proceeds from a sale would exceed the value of the business embedded in PPL's stock price. The sale is expected to close in the first half of this year.

If PPL can complete the sale, as it is expecting, it can use the proceeds to either strengthen its balance sheet or acquire assets in the U.S. to grow its domestic operations -- or both. That focus should help drive the utility's U.S. earnings growth, as well as support its stock's valuation. In its latest earnings call, management suggested that the sale process is progressing as expected.

Overall, the utility looks well-placed to continue its fat payouts. As the sale of the U.K. assets finishes, the stock should also recover some of last year's losses.