Please ensure Javascript is enabled for purposes of website accessibility
Log In Help Join The Motley Fool
Free Article Join Over 1 Million Premium Members And Get More In-Depth Stock Guidance and Research
By Jennifer Saibil - Mar 11, 2021 at 10:50AM

Invest in winners, because they keep on winning. That's a popular investing thesis, because over time great companies tend to produce great results. But when it comes to Amazon (AMZN 3.66%) and Disney (DIS 3.51%), two leaders in their respective industries, which is the better buy?

Amazon was under pressure to fulfill millions of orders with limited infrastructure during the pandemic. But Amazon isn't Amazon for nothing. The company rose to the occasion, hiring hundreds of thousands of workers, many of whom had lost their previous jobs while businesses collapsed during lockdown. Aside from a short period of time when it could only handle essentials orders, Amazon continued to deliver throughout the pandemic, racking up new customers and billions of dollars in sales over the past year.

The result was not surprising: In the last 12 months, Amazon's stock rose 62% despite being one of the largest companies in the world by market capitalization, versus the S&P 500's 35% gain over  the same period. In short, the pandemic propelled Amazon to greater heights. 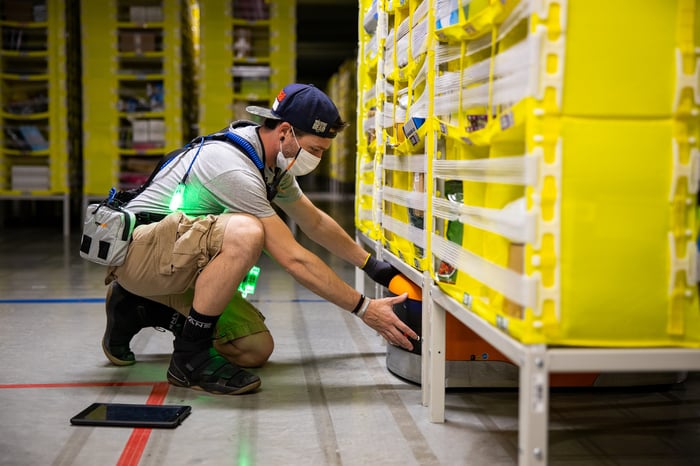 Amazon could continue converting revenue into income, more than doubling earnings per share in the fourth quarter of 2020 from the year ago quarter, while sales grew 44%.

Disney didn't have it quite as good as Amazon during the pandemic. Closed parks meant a huge drop in its best segment, to the tune of a 53% decline in the first quarter ended Jan. 2, contributing to a 22% overall sales drop for the company.

The bright spot for Disney over the past year was Disney+, its premium streaming site. Launched in November 2019, it already had nearly 95 million paid customers by the end of Q1. Between Disney+, the Hulu general streaming site, and ESPN+ premium sports streaming, Disney ended the first quarter with 146 million paid subscribers, not too far behind Netflix's 210 million. Direct-to-consumer revenue increased 73% in the first quarter.

Outgoing Amazon CEO Jeff Bezos was nostalgic in the fourth-quarter earnings report, saying "Amazon is what it is because of invention. We do crazy things together and then make them normal." And that is the perspective as he hands over the reins to Amazon Web Services head Andy Jassy, who will take over in July. Bezos continued, "Right now I see Amazon at its most inventive ever, making it an optimal time for this transition." 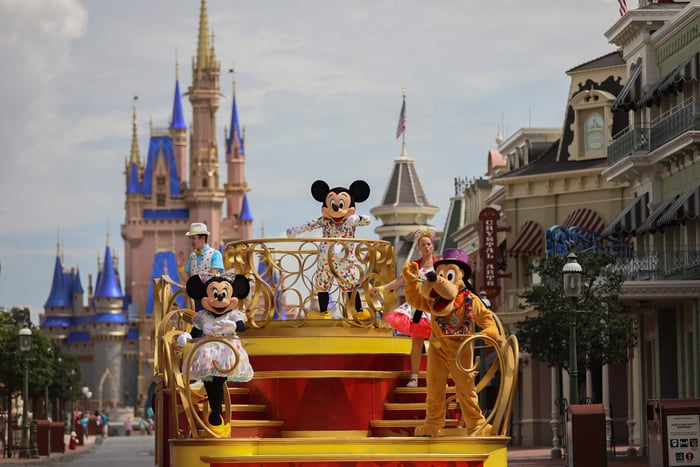 Some of the recent developments at Amazon are Made For You, a custom clothing service; Amazon Pharmacy; a deal to provide its Just Walk Out technology to Hudson, which operates 1,000 travel convenience stores; and new grocery stores under the Go and Fresh banners featuring the technology.

And then there's AWS, which has been an entirely new growth area that's growing in popularity, scoring new deals with the likes of JPMorgan Chase and Twitter. Last week it announced a new expansion in Japan, and management has plans to open many global regions over the next few years.

Disney has lots of plans for parks and experiences whenever it becomes possible to host crowds again. Parks remain closed or at limited capacity worldwide, but the company is already investing in new rides, cruise ships, and more, and is ready for action.

In the meantime, Disney is pouring money into launching Disney+, which is expected to become profitable in 2024. Streaming sites are together expected to reach up to 350 million subscribers at that time, with Disney+potentially becoming the leading streaming provider.

Disney is up 10% year-to-date, while Amazon is down nearly 3%. There has been some tech pullback recently, which may have affected Amazon, and investors are confident about Disney+.

I highly recommend both Amazon and Disney. But if you could only pick one, and you had the money to invest at $3,000 a share, I would choose Amazon. Its resilience in any kind of economy and future potential in so many areas beat out Disney.