Incyte is betting bigger on ruxolitinib to bring back growth.

Despite growing by more than 600% over the past 10 years (more than doubling the S&P 500's returns in the process), over the past five years, biopharmaceutical company Incyte (INCY -2.81%) has barely budged. In that time, the company's shares are up approximately 10%. Not annually. Not year-to-date. Not within the week. That's 10% total over the entire past five years. This lags the S&P 500 and its 90%-ish growth over that time, and it lags the Nasdaq Biotech ETF (IBB -2.54%) and its 70%.

Fortunately, Incyte may soon be able to squeeze more juice from its crown jewel. 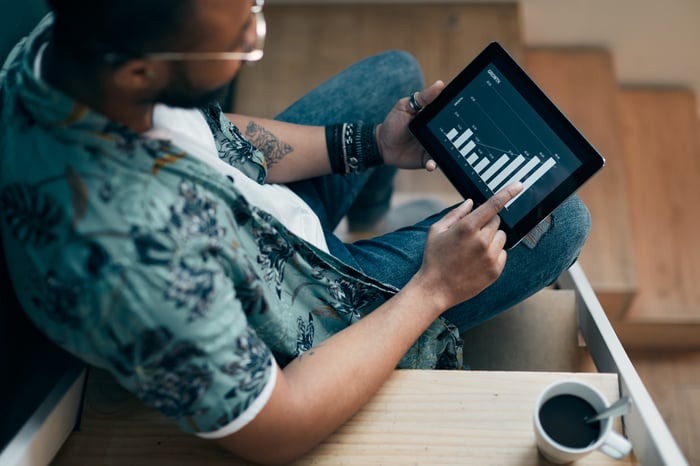 Incyte's ruxolitinib, a type of non-steroidal anti-inflammatory medication called a JAK inhibitor, already makes up a major chunk of earnings, representing $2.22 billion of the company's $2.46 billion in fiscal 2020 (which ended Dec. 31). It's currently approved to treat myelofibrosis, a rare type of blood cancer, but Incyte is working on expanding ruxolitinib into dermatology as well. The company has formulated a ruxolitinib topical cream with an eye toward helping the 10 million Americans living with atopic dermatitis, a disease that produces a long-lasting itchy rash that periodically flares up. While the rash can typically be managed by topical steroid creams and ointments, long-term topical steroid usage can lead to thinning of the skin, as well as irreversible stretch marks.

The market for a non-steroid treatment for atopic dermatitis is estimated to be $2 billion in the U.S. alone, but other companies have fallen well short of this mark. For instance, while not a JAK inhibitor, Pfizer's (PFE -1.83%) Eucrisa brought in only $138 million in 2019 after more than two years on the market; that said, Eucrisa seems less efficacious than ruxolitinib in early studies. I believe Incyte can top Eucrisa sales.

Topical ruxolitinib is also in phase 3 trials for vitiligo, a disease that causes a loss of skin color in blotches. Phase 2 studies for this condition demonstrated greater than 50% improvement in restoration of facial pigmentation in up to 50% of patients at 24 weeks of treatment; only 3% of the placebo group showed this level of improvement. This compares favorably to a currently recommended treatment for widespread vitiligo, phototherapy. Phototherapy only produces a marked response in about 20% of patients after at least six months of two or three office visits per week at a cost of over $1,000 per session.

Given all this, it is not hard to envision a scenario in which topical ruxolitinib, if approved, could dominate the market of 1.5 million-plus U.S. patients for whom there is no FDA-approved therapy for repigmentation (while phototherapy is an accepted treatment for vitiligo, it is not approved for repigmentation per se). This space is likely worth $500 million to $750 million, according to Incyte. If the company is able to post positive results in the current tests and get approval (potentially as early as the first half of 2022), dermatologists would likely become quickly familiar with topical ruxolitinib for vitiligo. Thanks to that familiarity, plus what's likely to be a broader target market than the "mild to moderate disease" targeted by Eucrisa, I suspect that ruxolitinib sales for the atopic dermatitis market could eclipse Eucrisa's $138 million thanks to the taking of market share and likely higher pricing. I think $150 million is a reasonable early first target for the non-steroid treatment market for atopic dermatitis.

Investors are wise to beware of a one-trick pony -- but ruxolitinib is proving to have staying power. It was first approved almost a decade ago, in November 2011, and ruxolitinib's year-over-year revenue growth from 2019 to 2020 was just north of 15%, to $2.22 billion. Incyte projects that number will grow by 10% to 14% in 2021 -- and importantly, these projections do not include any of the six expected new approvals the company anticipates in 2021 (including ruxolitinib cream for atopic dermatitis).

As for valuation, Incyte has a price-to-sales ratio of 6.5, making it cheaper than its peers. Vertex Pharmaceuticals (VRTX -3.62%) has a P/S of 9, with management guiding for 10% growth in 2021; BioMarin Pharmaceutical (BMRN -1.19%) has a P/S of 7.8 but with flat sales guidance for 2021; and while Regeneron (REGN -1.25%) is similarly priced with a P/S of 6.25 and is guiding for about 15% growth, Regeneron has to battle in a competitive checkpoint inhibitor market against the likes of Merck (MRK -0.97%) and Roche (RHHBY -0.07%). Conversely, there is no other topical JAK inhibitor on the market for atopic dermatitis, nor is there an approved repigmentation drug on the market -- for vitiligo making the runway clear for growth takeoff for Incyte.

With multiple shots on goal in 2021 and a relatively low valuation to grow from, Incyte may be just the stock for patient investors looking for healthcare value.