Please ensure Javascript is enabled for purposes of website accessibility
Log In Help Join The Motley Fool
Free Article Join Over 1 Million Premium Members And Get More In-Depth Stock Guidance and Research
By Neil Patel - Mar 12, 2021 at 10:00AM

The global leader in athletic apparel is back to winning again.

Nike (NKE 2.70%) had a roller-coaster ride of a year in 2020. After falling more than 30% in the first three months of the year, the stock price has more than doubled since. Stores are now mostly back open, and management feels confident about the company's strong momentum in 2021 and beyond.

Rising sales and profits will, of course, propel Nike to new heights. That would be the case for any sporting goods retailer. But the company's efforts over the past year to continue generating those rising sales and profits are providing some important clues about this company's future, and especially where this consumer discretionary stock will be one year from now.

A revenue increase of 9% in fiscal Q2 2021 (ended Nov. 30) signals the return to growth for Nike following a small drop in the previous quarter. The business will depend on its Greater China segment for gains. That region's 24% growth in the quarter far outperformed the other geographies. 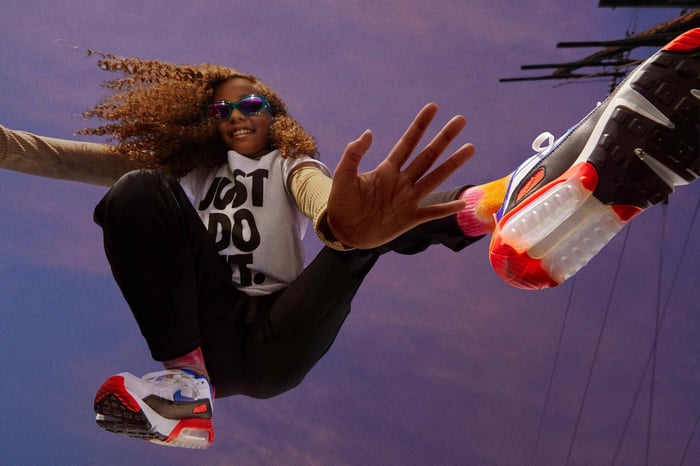 Although physical foot traffic remains depressed, this should start to pick up across the company's worldwide store base as economies continue slowly opening back up, providing a boost to revenue.

Nike is lauded for its remarkable marketing expertise, and it benefits immensely from its superstar-studded lineup of endorsed athletes. We've already seen live sports return, so having more major sporting events throughout the year will lead to greater exposure for the apparel giant. And the company certainly expects to gradually spend more on marketing, which it calls "demand creation" expense, compared to previous quarters to capitalize on this return to normalcy.

With a highly disruptive event (hopefully) behind us, Nike's management is confident about the company's future prospects and remains committed to its long-term financial targets of high-single-digit-percentage revenue growth and mid-teens-percentage earnings per share growth.

One of the main factors that will drive Nike this year is its intense focus on technology. The company's Consumer Direct Acceleration initiative, which was announced last summer, focuses on creating seamless consumer experiences, optimizing product development, and utilizing data and analytics to lift efficiency.

The pandemic presented Nike with a real-life stress test, and it passed with flying colors. E-commerce sales year over year soared 84% (fiscal Q2 2021), 82% (fiscal Q1 2021), and 75% (fiscal Q4 2020) in the last three quarters, and the membership rewards club added a whopping 70 million members globally since the pandemic began.

It's worth highlighting the success of SNKRS in particular, an incredibly successful Nike app used for new sneaker releases. In the most recent quarter, the company launched its first-ever product drop using live-streaming, resulting in a complete sell-through of the new shoes in under two minutes. These kinds of actions will only further build consumer engagement this year and in the future.

Nike is now a truly digital-first company. Expect it to continue leaning heavily on its technological capabilities to connect more deeply with consumers, strengthening the brand over time.

The stock currently trades at a forward price-to-earnings ratio of 46, something I am not worried about at all given the direction Nike's heading in. It's worth paying up for the highest-quality companies -- a category Nike certainly belongs in.

While predicting where a stock will be 12 months from now is a tough game to play, I can say with confidence that Nike's business will be in a better place at that time. As the pandemic becomes a distant memory, revenue and income will grow on the backs of the company's digital focus and consumer engagement efforts over the past year.

Wall Street analysts estimate that EPS will rise 89% in fiscal 2021 and 29% the following year. If you haven't already, it would be wise to jump on the Nike bandwagon now.