Please ensure Javascript is enabled for purposes of website accessibility
Log In Help Join The Motley Fool
Free Article Join Over 1 Million Premium Members And Get More In-Depth Stock Guidance and Research
By Alex Carchidi - Mar 13, 2021 at 6:25AM

Their upcoming merger is exciting, but it may not solve some existing issues.

What's more exciting (to cannabis investors, at least) than growing a massive amount of marijuana? If you said, "combining the holdings of two major cultivators to grow a truly colossal amount of marijuana," you're probably already salivating over the merger between Tilray (TLRY) and Aphria (APHA), set to happen later this year.

The combined entity will consolidate resources into one of the industry's largest multinational players, and will retain Tilray's name. The business will make products that range from recreational cannabis to bulk hemp and craft beer. Still, the merger isn't finalized, and there's no guarantee that the resulting business's stock will be a winner. I'm optimistic that the deal will probably work out in the long run. But it's important for investors to understand what's looking favorable and what obstacles are likely to persist for the new Tilray. 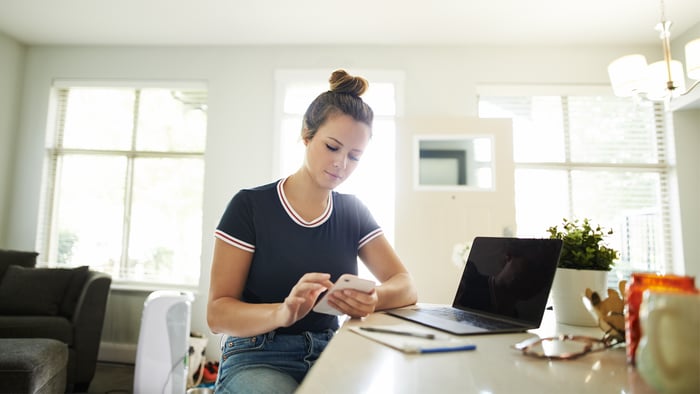 Green flag No. 1: Strong positioning for the EU medicinal market

Aphria and Tilray currently have a significant presence in the European Union, including in Germany, the political union's largest market for medicinal cannabis. That will allow them to capture at least some of the EU market's value, which could be worth as much as $3.9 billion by 2025 according to a report by BDS Analytics. The centerpiece of Tilray's Europe strategy is low-cost cultivation and manufacturing, which is currently based in Portugal.

By growing and processing its cannabis in an EU country, the company avoids tariffs that apply to imported products. If the cultivation costs are low enough, it might even be able to produce cannabis for its subsidiaries in the U.S. All of the above would go a long way toward supporting earnings growth, not to mention a higher stock price, over time.

Green flag No. 2: Market leadership is close to certain

Management is pitching the merger as a sure path to becoming the largest adult-use marijuana company in the world by revenue. The post-merger business will have estimated pro forma revenue of $685 million each year, which should beat Curaleaf's expected $673 million. In Canada, it could hold slightly more than 17% of the market.

More importantly, as Tilray's brand recognition become stronger over time and consumers become more loyal, it won't necessarily need to fight for a larger market share. Loyalty will act as a moat, protecting its existing revenue. As a result, it'll have more cash to penetrate larger markets or develop new products compared to its local competitors.

Red flag No. 1: Neither company is reliably profitable

Despite the two green flags I just discussed, neither Aphria nor Tilray has proven that they can consistently make more money than they spend.

While both companies adjust their reported margins for fluctuations in the prevailing market price for cannabis, thereby allowing them to report a higher margin than they might under generally accepted accounting principles (GAAP), those still aren't enough to make either consistently profitable, even if the occasional quarter is favorable. There's no clear trend toward positive earnings before interest, taxes, depreciation, and amortization (EBITDA) over time. Simply put, there's no proposed mechanism by which adding two unprofitable companies together would result in a profitable one. 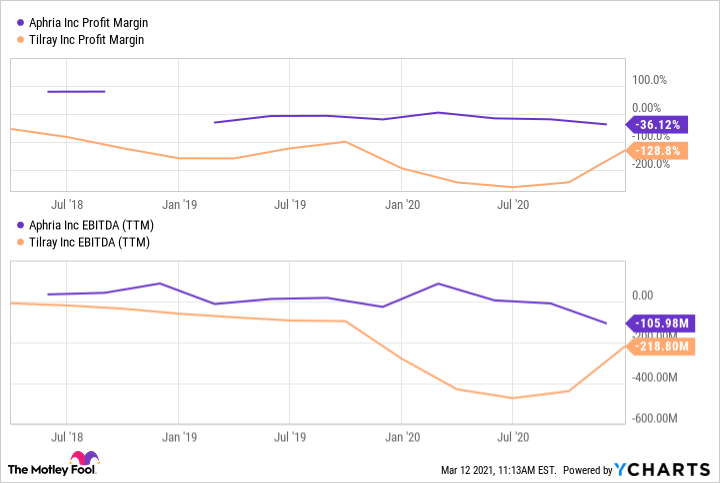 Nonetheless, in the first two years after the merger, management expects to realize around $78 million in pre-tax cost savings. But that probably won't be enough to close the profitability gap on its own. At some point in the future, the business will need to reduce its costs further, or increase the selling price or volume of its most profitable products for the stock's value to grow.

Red flag No. 2: Expanding into the U.S. and the EU at the same time may be too ambitious

The new entity's strategy will be to grow its EU operations at the same time as it makes inroads in America. Importantly, the U.S. market is much bigger: According to Emerton, a strategic consultancy, it could be worth $20 billion by 2025. Even if Tilray's production facility in Portugal allows for efficient servicing of demand in Europe, the company will be splitting its efforts by chasing a slice of a much smaller pie. Plus, its marijuana may not be as inexpensive if it's produced in Portugal and then shipped to the U.S. or Canada for distribution.

Then there's the fact that its U.S. and EU operations target different segments of the market, reducing the opportunity for streamlined production. Right now, the plan is for the new entity's presence in the U.S. to build on the Manitoba Harvest brand of hemp and cannabidiol (CBD) products. Those products can be sold at mass retailers and grocery stores, which isn't the case with medicinal or adult-use cannabis. In other words, there isn't any existing position that will let the company break into the regulated cannabis markets in states that opt to legalize it. That's a problem that can be solved with time and effort, but in the meantime, it'll be missing out on the largest segments of the market.