Lucid Motors is one of the hottest electric vehicle (EV) start-ups that is coming to the public markets this year, recently announcing that it will be merging with Churchill Capital IV (CCIV), a special-purpose acquisition company (SPAC). Electric pickup truck and SUV maker Rivian is reportedly planning to go public in 2021, although it is said to be opting for a traditional IPO instead of the SPAC route. EV stocks have been booming in recent months on hopes that the Biden administration will pursue policies to promote EV adoption.

As the most prominent pure-play EV maker, there will always be inevitable comparisons to Tesla (TSLA -6.80%). That's especially true for Lucid, since the company was founded and is currently managed by former Tesla executives, and the new entrant is also pursuing many of the same go-to-market strategies. Lucid CEO Peter Rawlinson has framed competition in the EV market as a technology race. Here are three major technology advantages that Lucid claims it will have over Tesla. One standout feature of the forthcoming Lucid Air sedan is planned support for bi-directional charging, which will facilitate vehicle-to-vehicle (V2V) charging and vehicle-to-grid (V2G) charging.

Typically, when an EV runs out of juice, you have to tow it to the nearest charger since there isn't a practical way to bring energy to the car. Unlike a plastic gas canister, EV batteries often weigh around 1,000 pounds. Being able to charge an EV off another EV can potentially offer a more convenient solution in an emergency situation.

Speaking of emergency situations, the recent winter storms that battered Texas have reminded everyone of how critical it is to have access to electricity. While many of the issues that plagued the Lone Star State's electric grid are unique to Texas, the crisis underscored another possible use case of having an enormous EV battery sitting in your garage.

During a power outage, a Lucid Air owner will soon be able to power their entire home using the vehicle's high-voltage battery pack. The feature is facilitated by a proprietary technology that Lucid calls a Wunderbox, the onboard charging unit.

It's worth noting that Tesla vehicles are technically capable of this -- hackers and tinkerers have hooked up Teslas to power a home -- but that the company has chosen not to officially support it for whatever reason. In fact, using a Tesla as a stationary power source will explicitly void the vehicle's warranty. Maybe Tesla just prefers that people separately buy Powerwalls instead.

Few areas are as critical to an EV as efficiency, usually measured either by watt hours per mile (Wh/mi) or miles per kilowatt hour (mi/kWh). Everything from charging speed to estimated range hinges on this critical metric. The greater the efficiency, the longer range the vehicle will have and the more miles that it can add while charging.

Rawlinson has noted that consumers really just care about the functionality of how much range they can add over some unit of time, not how many kWh they are putting into their car. Lucid says that the Air can achieve over 4.5 mi/kWh, compared to around 4 mi/kWh for the Tesla Model S. Other rivals are below 3 mi/kWh.

Additionally, higher efficiency allows an EV to travel a specific range with a smaller battery pack. With battery packs being the most expensive component of any EV by far, reducing the size of the pack needed paves the way for a lower price tag for the EV itself over time.

Lucid has also made impressive progress in miniaturizing its drive unit, which consists of a permanent magnet motor, the power inverter, and a transmission. In doing so, the company claims to have a dramatically higher power-to-weight ratio, as measured by horsepower per kilogram (hp/kg). At 9 hp/kg, the Air's drive unit is far higher than rivals that are closer to a ratio of 3. 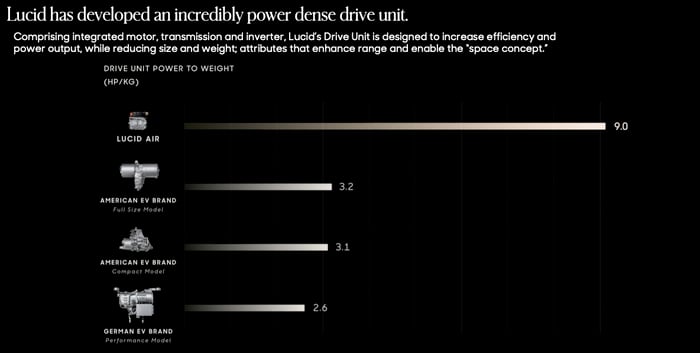 Anyone who is familiar with a Tesla drive unit may recognize that the 3.2 hp/kg in the chart above represents the dominant EV leader, while the 3.1 hp/kg unit appears to be General Motors' Chevy Bolt. Having a higher power-to-weight ratio also contributes to greater efficiency, while allowing Lucid to make more room for other components or a more spacious passenger compartment.

Lucid's EV technology is undeniably impressive, but it will still need to prove that it can deliver these types of results in real-world environments. Of course, Tesla has its fair share of advantages, too, such as a Supercharger network that is the most convenient and intuitive among all charging networks, the strongest pure-play EV brand that commands an intensely loyal customer base, and a meme enthusiast CEO that can command the entire world's attention with a tweet.

More importantly, these comparisons aren't to say that Lucid is superior to Tesla overall -- I've been a Tesla investor for over a decade and have owned multiple Teslas. Rather, it's more about ongoing innovation of EV technology versus internal combustion engine (ICE) technology, and competition among EV specialists will be the most powerful driver of innovation. To the extent that Lucid spurs Tesla to push the envelope even further, the more the two companies can accelerate adoption of EVs more broadly.