Please ensure Javascript is enabled for purposes of website accessibility
Log In Help Join The Motley Fool
Free Article Join Over 1 Million Premium Members And Get More In-Depth Stock Guidance and Research
By Jim Halley - Mar 13, 2021 at 6:10AM

There's been a lot of bad news lately for the Medicare insurer, but looking at the company's financials, could it still be a stock that richly rewards investors?

Clover Health (CLOV 3.91%) made a big splash on Jan. 8 when it went public through a SPAC backed by Chamath Palihapitiya, the CEO of Social Capital and an early senior executive at Facebook. The Medicare Advantage insurer's stock, however, is down 45% since then, after suffering a double whammy of bad news in early February.

Does this spell trouble for the young public company, or is the dip in its stock an opportunity to buy shares today and become a millionaire tomorrow? 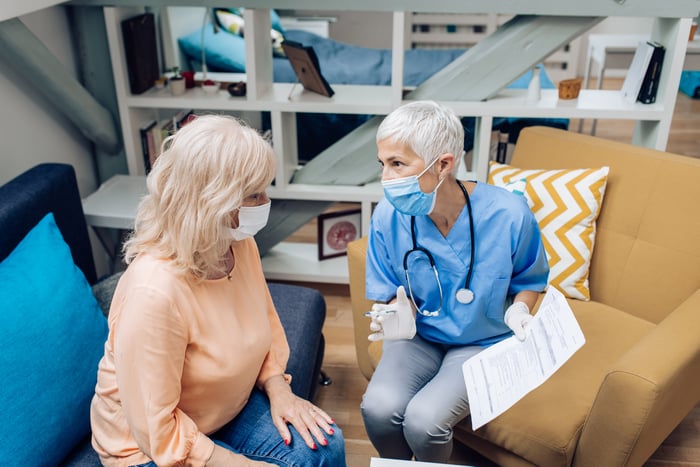 First came a scathing report by Hindenburg Research alleging that Clover misled investors by not disclosing Department of Justice inquiries before the company's SPAC. The report also raised questions about Clover CEO Vivek Garipalli, alleged other improprieties in the company's business practices, and maligned Clover Assistant, the company's software platform for physicians.

The second problem came in Clover's response a day later, when in rebutting Hindenburg's report, it conceded that it was receiving inquiries from the Department of Justice and the SEC.

Those giant red flags would be enough to scare off most investors. They certainly should make someone pause before buying the company's stock. However, looking at the company's year-end numbers, there's some cause for long-term optimism. The question is, have the recent bad news and stock slump provided a buying opportunity, or is it just the tip of an iceberg that could sink investors?

Making headway in a crowded space

Our aging population has meant the demand for Medicare Advantage has grown and will continue to do so. One report by the Kaiser Family Foundation put the number of people enrolled in Medicare Advantage programs at 24.1 million in 2020, double what it was a decade ago.

The problem for Clover is that the field is dominated by established players such as Anthem, CVS Health, which owns Aetna, UnitedHealthcare, and Humana. The big four account for 70% of the enrollees, leaving smaller companies such as Clover to scrounge for the rest. Clover's year-end report said it had 58,000 members. That's well behind the big four. UnitedHealthcare, for example, said in January that it had 7 million Medicare Advantage members.

Clover is showing growth, but no profits

However, the company is still losing money. It reported a net loss of $91.6 million for the year. While that was also an improvement over 2019, where the company lost $363.7 million, there's a caveat -- $81.6 million of the 2020 yearly loss came in the fourth quarter, as more of its clients saw their doctors, reversing a trend that had carried on during the pandemic that benefited the company's bottom line.

Clover is still a very new company. It was founded in 2012, so it's not surprising that it isn't making a profit just yet. In that sense, it's following a path that many start-ups follow, of rapidly building revenue as a way of eventually becoming profitable. My concern is that even though Palihapitiya, in an interview on Squawk Box, said the company should be profitable by 2023, Clover doesn't yet seem to be headed even in the right direction. In its year-end report, Clover said it expects a net loss between $170 million and $210 million in 2021.

Addressing the question of this article -- is Clover Health a millionaire-maker stock? -- the answer is a resounding maybe, despite all the issues I've raised.

That puts the compound annual growth rate at 12.06% over the next four years. Clover Health, as a start-up, is also in a good position to nearly double its revenue every year. To do that, however, it needs to do more to separate itself from a very crowded field.

In 2021, the company's overall rating with the Centers for Medicare and Medicare Services (CMS) was three stars out of five, including 3.5 stars for its health services and 3.0 for its drug plan. That's a problem for the company's growth, as the average plan had a rating of 4.06 and 77% of those enrolled did so in plans that were given at least four stars.

If the stock's price continues to fall, there may come a point, say at $6 a share, that it makes sense where the potential reward of doubling one's return outweighs the stock's risk. But at its current price, I'd stay away.