Please ensure Javascript is enabled for purposes of website accessibility
Log In Help Join The Motley Fool
Free Article Join Over 1 Million Premium Members And Get More In-Depth Stock Guidance and Research
By Taylor Carmichael - Mar 13, 2021 at 6:33AM

I'd increase my stakes in two small caps that I already own.

What would I do with $5,000? That's easy. I'd buy 25 shares of Shift4 Payments (FOUR -3.81%) and 20 shares of Inari Medical (NARI 4.07%). Shift4 is a fintech focused on processing payments for restaurants and hotels, while Inari is a medtech company with a new device for removing clots in the vein. Both of these stocks have skyrocketed from their initial public offering (IPO) last year. And there's plenty of upside ahead. 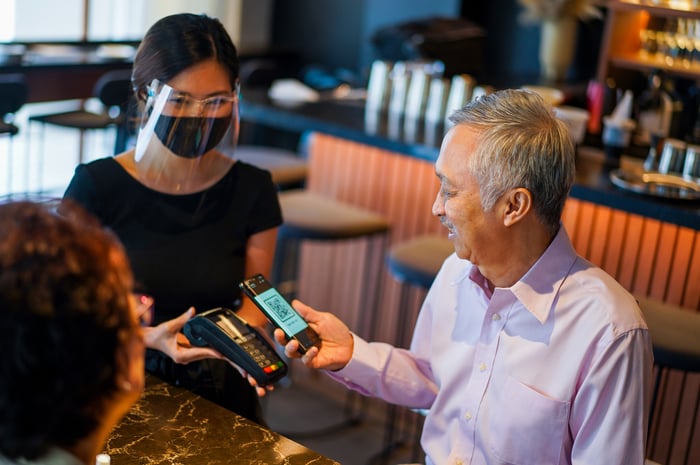 Jared Isaacman is the founder and CEO of Shift4 Payments. He's a 38-year-old billionaire who started his business in the basement of his family's house when he was 16. Isaacman grew his company from nothing to a $7 billion valuation in 22 years. And if you're not impressed with him yet, consider that Isaacman is going to pilot a Space-X mission this year. Yes, that's right, he's an astronaut as a side gig. Isaacman set the world record for fastest around-the-world flight in a light jet in 2009.

When he was a teen, Isaacman hired his father to handle the initial sales for his company, so he could avoid meeting potential clients and scaring them off with his youth. Today, Shift4 is a massive payments company that processes 3.5 billion transactions every year. Over $200 billion will be transferred through the company's systems in 2021. While competitor Square (SQ -5.29%) targets mom-and-pop retailers, Shift4 is focused on simplifying payments for large restaurant and hotel chains. The company now handles payments for one-third of the restaurants and hotels in the U.S. Its client list includes United Parcel Service, Arby's, Wendy's, KFC, Outback Steakhouse, Hyatt, Hilton, Caesar's, the PGA Tour, and the Las Vegas Raiders, plus 200,000 other customers.

Not surprisingly, COVID-19 hampered growth last year, as many of Shift4's restaurant and hospitality clients were shut down. Still, the company managed to keep its 21-year revenue growth streak intact. While revenues were only up 4% in the most recent quarter, the stock has jumped 178% since the company's IPO last June. Why is the stock up so far, so fast? The stock market is anticipating an economic recovery from the coronavirus. As Isaacman said on the earnings call, "Virtually all Shift4's merchants and all those that we have been adding throughout 2020 are operating at substantially below-normal levels, which we anticipate is becoming quite the coiled spring."

While almost everybody has heard of Square and PayPal (PYPL -1.50%), Shift4 is flying under the radar right now. Is there room for yet another fintech winner? Absolutely. After all, the global payments industry is estimated to be a $12 trillion market opportunity in six years. And there are important distinctions between these companies. Both Square and PayPal are making massive bets on the rise of cryptocurrencies. If you're negative on crypto, but want to invest in the fintech revolution, Shift4 might be a good choice for you. And if you want to know why Isaacman calls his company "Shift4," take a look at your keyboard.

One of the fun things about investing in Inari is that in every earnings call, you hear about another person whose life was saved by the company's product. In January, a 32-year-old mother of two was hospitalized with an infected blood clot in her right atrium. She was too sick for open-heart surgery. What the physician would have normally done in this situation was palliative care that would have kept the patient comfortable, without much hope of recovery.

Instead, the doctors were able to use Inari's noninvasive FlowTriever device to remove the clot. As CEO Bill Hoffman said on the conference call, "Two aspiration passes or Whooshes, as we'll call them, through the curve, and 20 minutes later, the entire infected clot was extracted."

That's a wonderful innovation. Even if I lose money, I'm happy to invest in Inari Medical. But I don't expect to lose any money. Inari offers doctors two noninvasive devices that remove clots in veins. While there are a lot of devices on the market that remove clots from arteries, Inari was first mover in creating a new device that is specifically meant for vein clots. (Arteries carry blood away from the heart, while veins carry blood toward the heart.)

Competitors like Boston Scientific (BSX 0.40%) and Penumbra (PEN -2.00%) are trying to keep up with Inari. Penumbra has introduced the Lightning 12 for vein clots, while Boston Scientific offers the AngioJet. But the biggest competitor is non-intervention, because of the perceived medical danger in trying to remove a clot. As first mover in non-invasive clot removal in veins, Inari is trying to wake doctors up to this new paradigm. And Inari's numbers speak for themselves. Revenues jumped 144% in the most recent quarter. That dwarfs the 15% revenue growth at Penumbra, or the 8% decline at Boston Scientific.

What's beautiful about Inari's business model is that the company's two products, ClotTriever and FlowTriever, are disposable. So every doctor who learns how to use one of these noninvasive devices to remove dangerous clots will likely become a repeat customer. Many doctors have been avoiding clot removal from veins because of all the risks of intervention. Inari is winning converts, and each one is a future revenue stream. 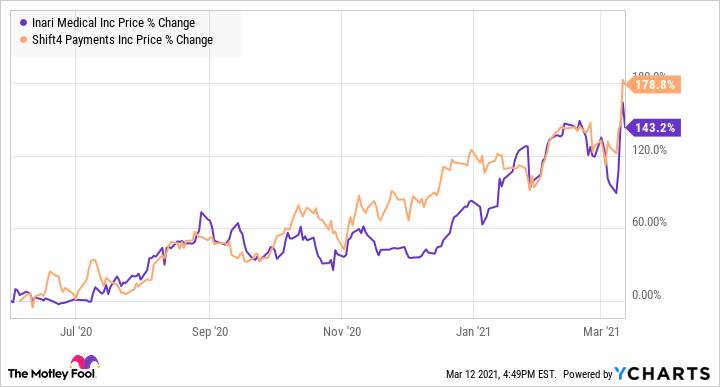 I'm buying Shift4 with the expectation that revenues will start surging after our economy reopens. And I'm buying Inari for all the revenue growth we're seeing right now. These two stocks have already more than doubled early investors' money, and I expect them to go higher still.