Please ensure Javascript is enabled for purposes of website accessibility
Log In Help Join The Motley Fool
Free Article Join Over 1 Million Premium Members And Get More In-Depth Stock Guidance and Research
By Jason Hawthorne - Mar 13, 2021 at 6:13AM

Despite hitting all of its goals for integration, the company is as cheap as it has been since before the pandemic.

When Teladoc Health (TDOC -6.43%) announced it was acquiring Livongo Health in August of last year, both stocks sold off significantly. Whether it was the purchase price, shareholders in each not wanting to own the other, or skepticism over the combination, Wall Street didn't like the deal. Yet, after only one quarter of operating as a single entity, Teladoc is already pointing out the benefits of the combination.

The stock is caught up in an overall market sell-off, so it's hard to know whether the market believes the story. That could present an opportunity for those willing to dig into the details. Let's explore what the company has said and whether there are already signs that the merger is going to be a winner for shareholders. 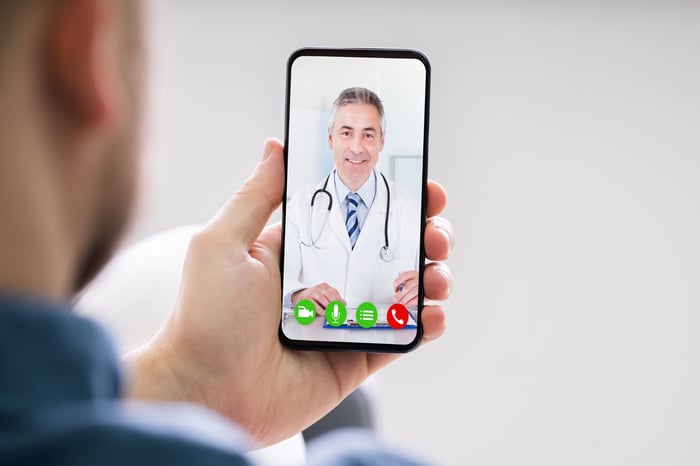 What constitutes a successful merger?

When Teladoc CEO Jason Gorevic announced the acquisition, he offered his perspective on how to measure success. He predicted that Teladoc would be able to integrate the additional products while providing deeper insights to drive lower costs, better outcomes, and a more user-friendly experience. The addition of Livongo was part of the larger strategy to consistently add services to the platform, in this case for chronic conditions. The goal is to end up with all services as part of a unified commercialization strategy and a single interface for customers. For investors, that is what we should listen for in company updates. Some signs of progress are already showing up.

The signs are already there

The company's third-quarter update provided the first hint that things were going well. Management disclosed a large deal, which brought Livongo to the 50,000 members of GuideWell, the parent of the Blue Cross and Blue Shield plan provider in Florida. The latest update, in February, offered even more encouragement. The company pointed to more than a dozen deals bringing one of the company's services to the other's customers. Even more proof of the cross-selling momentum, the number of these opportunities in the pipeline has more than doubled in just the past three months. This gave management the confidence to reiterate the $500 million in revenue synergies by 2025 promised when the deal was agreed upon.

Another avenue for cross-selling is through Teladoc's new Primary360 platform. The offering combines the convenience of virtual care with the trust that comes from choosing your own provider. The platform is only in its pilot phase, but the company is already seeing high engagement and world-class customer satisfaction scores. It's also proving to be a great way to identify new customers for Livongo's chronic disease management. The percentage of first-time diagnoses in these sessions has been 40% for hypertension or pre-hypertension and 25% for diabetes or pre-diabetes.

Finally, the integration of the two organizations is on track. The sales and marketing teams are now one, and cross-selling has been happening for months, as evidenced by the deals mentioned above. Integrating data is the next step, as the teams work to combine the 2 million blood glucose data elements per week captured by Livongo with the 100,000 patient messages and 30,000 daily visits of Teladoc. With all of the progress, it's natural to ask how it will affect the financials going forward, and whether that is already priced into shares.

Is Teladoc's success already priced into the stock?

For a company like Teladoc, which is investing so much to capture market share in an emerging industry, earnings can take a back seat to sales. To capture this, we can look at the price-to-sales ratio (P/S). Every great company should one day turn a profit, but Amazon has opened investors' eyes to the benefits of growing for decades before that earnings power kicks in. For Teladoc, it can help us compare the current valuation to the recent past.

With a P/S of 15.78, we can see investors are paying less now than at any time since before the pandemic. At the current market capitalization, the company will have a P/S of 15.3 based on management's 2021 guidance. The declining ratio could be Wall Street's way of signaling that the growth is slowing, or that the company needs to start showing a clearer path to profitability. 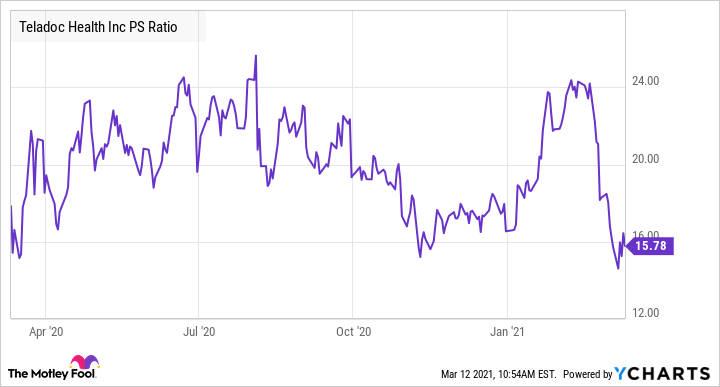 Cross-selling services between Livongo and legacy Teladoc customers will be critical to increase sales without adding costs, the clearest path to profitability. For now, all signs point to success in that effort, as well as progress integrating the teams, data, and product interfaces. Investors who have been waiting for a chance to take a stake in a company that could come to dominate virtual care in the years ahead haven't had this good of an opportunity in the past year.