The game maker's stellar margin performance shows why the stock is a long-term winner.

Activision Blizzard (ATVI 0.36%) is getting better at converting more revenue into profits. On top of record financial results last year, it's impressive that the company's adjusted operating margin reached 39%. That's getting up there with elite tech giants, such as Microsoft.

Looking for companies that consistently earn high margins is a good way to discover potential winners in the stock market. Not only does it indicate a competitive moat around the business, but it also leads to many other rewards for shareholders over time.

Let's look at the key factors driving Activision Blizzard's margin performance, and what investors should expect from this top-tier video game producer from here. 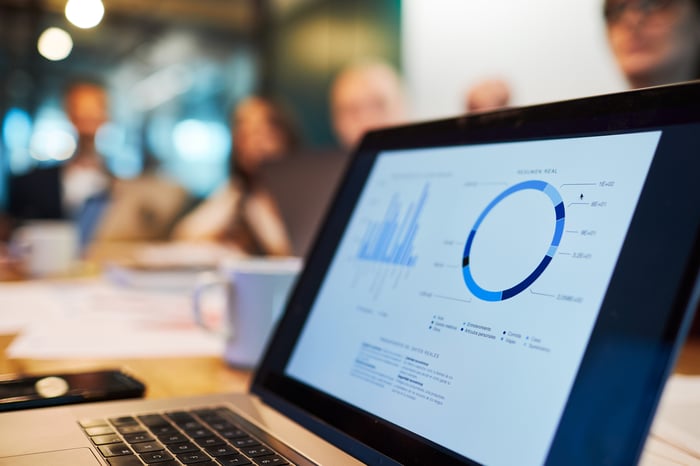 Digital shift in the gaming industry

Digital revenue was 74% of total revenue in 2016 but reached 82% last year. This trend accelerated during the pandemic, as more players purchased games digitally, instead of buying packaged games in a store.

Activision also saw strong demand for virtual items, such as Call of Duty points and other content that players buy while in the game. As a result, in-game net bookings increased by 44% year over year, comprising 58% of total bookings.

When a company is converting more revenue into operating income, it's also going to show up in the form of growing free cash flow, which grew 27% last year.

This performance leaves the business sitting in a great financial position. Activision ended 2020 with $8.6 billion in cash and $3.6 billion in long-term debt, leaving the company with a healthy net cash position of approximately $5 billion.

There are a few ways the company could reward shareholders with this cash. First, it already announced a 15% increase in the dividend, bringing this year's annual payment to $0.47 per share. It also announced a new two-year share repurchase program of $4 billion, which is often seen as a more tax-efficient way to return excess cash to shareholders.

Investors should also be aware that acquisition activity has been heating up recently across the industry. Electronic Arts has announced two deals worth over $3 billion total since December, while Zynga has made three deals in the last 12 months. The most eye-opening transaction was Microsoft's $7.5 billion deal to acquire ZeniMax Media, owner of Bethesda Softworks.

It seems everyone is getting interested in deals except Activision right now. Activision's last acquisition was King Digital Entertainment, the maker of the popular mobile game Candy Crush, for $5.9 billion in 2016. After spending a few years paying down debt and building up a cash cushion on its balance sheet, Activision could put some cash to work.

Investors should stay alert for this. In its annual report, the company states: "We consider, on a continuing basis, various transactions to increase shareholder value and enhance our business results, including acquisitions, divestitures, joint ventures, share repurchases, and other structural changes." 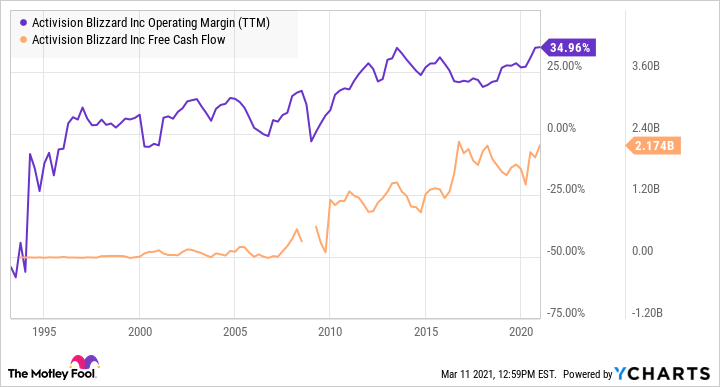 The margin story is not over

After a robust year, Activision's guidance calls for a breather in 2021, with flattish top-line growth. However, as Durkin explained on the last earnings call, Activision has a pipeline of new content releasing soon that should drive higher digital revenue and profits in the near term.

Overall, we are entering 2021 with momentum in our biggest franchises and a pipeline of content and growth initiatives that we expect will enable each of our segments to grow operating income for the full-year 2021.
-- CFO Dennis Durkin, Q4 2020 conference call

Activision expects its adjusted operating margin to reach a stellar 41% in 2021. In addition to digital revenue growth, the company also credits operational discipline for driving a higher margin.

It's still in the process of streamlining operations, consistent with management's initial restructuring announced in early 2019, to focus on improving the performance of its biggest franchises. Because of this, there is likely further room for Activision Blizzard's operating margin to improve beyond 2021, which is an additional catalyst for shareholder returns.