This small, but ambitious, fintech is making moves to grow.

While the banking industry has managed the financial turmoils of the coronavirus pandemic well overall, the stock performance of some banks has been underwhelming over the past year as investors worried about how the industry would deal with a faltering economy. Traditional banks also had to manage while facing tighter government regulations and a low-interest-rate environment.

A year on now into the economic turmoil, most banks have managed to recover their stock losses from the worst point in 2020. At the same time fintech, or financial technology, entities were able to outperform traditional banks as digital payments and other services became super important under pandemic lockdown conditions. But like other tech-oriented stocks, there has been some price pullback recently.

Green Dot (GDOT 1.53%), a hybrid bank and fintech company, saw its stock outperform traditional banks, growing 175% over the past year compared to 111% gains for the SPDR S&P Bank ETF. But unlike some of the big banks that made most of those stock price gains in 2021 (up 28%), Green Dot stock is down 8.2% so far this year.

What does that say about this stock? Is now a good time to buy? 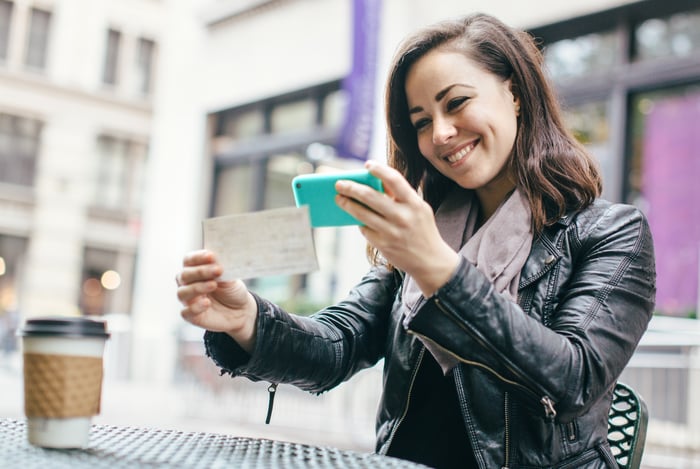 As a bank, Green Dot offers consumer-level savings and checking accounts, prepaid debit cards that are available for retail sale in stores, and branded credit cards for retailers. In the fourth quarter, Amazon rolled out the flex debit card through Green Dot's program. Green Dot also recently launched a mobile banking app called GO2bank, which is meant to give underbanked Americans access to easy and cheap banking options. The company says that 5.4% of Americans (about 7 million people) are underbanked, living paycheck-to-paycheck and using expensive banking products to manage their money.

The company also operates a second arm that provides banking-as-a-service (BaaS) products for large companies like Apple, Intuit, and Uber Technologies. These companies are large enough to require some bank-type services for their users, but it's usually not efficient for them to create their own banking divisions. It makes more sense for them to outsource these functions, and Green Dot prepares customized solutions for each company. One of the services it provides for Uber, for example, is depositing payments for drivers.

Its latest earnings report was a good one for the company: Fourth-quarter revenue increased 14% year over year, and full-year revenue was up 13%. There was a generally accepted accounting principles (GAAP) net loss of $24 million, compared with net income of $1.7 million in 2019, but non-GAAP earnings per share increased 121% to $0.31. Headwinds came in the form of lower paycard sales and a drop in the Uber program, and the company dealt with the banking sector problem of falling interest rates throughout the year. Expenses increased 11%, but those investments in its technology are meant to offer better features and capture greater market share.

The company is also consolidating and integrating some of the overlapping technical functions into its own platform to reduce third-party expenses and become more agile. CEO Dan Henry said that the company is expecting a sales increase for 2021 after several years of declines, and guidance for fiscal year 2021 is predicting a 3% revenue increase and flat net income.

GO2bank has the potential to be a game-changer for millions of Americans. It offers $200 overdraft protection and the ability to access direct deposit funds two days early, offers that have a lot of appeal for the underserved customer class it is targeting.

Henry said that investments in GO2bank will have a positive impact on the BaaS program, saying "We'll be able to leverage the technology tools and intelligence of this product on behalf of our BaaS partners as well."

The company said it was working on deals with Kabbage (recently acquired by American Express), Alphabet's Google, and others. It's growing its services, partly through these partnerships, to serve what it sees as an underserved market of small- and micro-businesses with its prefab fintech solutions. And it's planning to improve features and pick up new clients in 2021.

Green Dot boasts two features that bode well for its future. One is its two-pronged model, offering two well-developed structures simultaneously that give it several ways to grow its business. The second is how effectively it's able to innovate with new features.

The company will be somewhat held hostage by low interest rates until the Federal Reserve decides to raise them again. But it's expanding its BaaS and other products and has formed deals with many top companies. Green Dot has a lot going for it, and investors should consider it for their portfolios.