Forget technology -- the success of these companies is simple.

The stock market had another mixed day on Thursday, as investors continued to rotate away from high-flying tech stocks. Fears about rising interest rates continued to plague much of the market. As a result, the Nasdaq Composite (^IXIC -0.26%) continued to plunge even as the Dow Jones Industrial Average (^DJI -0.75%) posted more modest losses on the day. The S&P 500 (^GSPC -0.58%) landed in between.

Some investors are uncomfortable in their inability to fully understand the business models behind the best-performing tech stocks of the past year. Yet you can still find great performers without having to dig into the latest computer or mobile device technology. On Thursday, investors in Williams-Sonoma (WSM 1.69%) and RH (RH 5.16%) benefited from a pretty obvious trend that could play out for quite a while into the future.

Luxury retail is coming back

The bullish case for luxury retailers like Williams-Sonoma and RH is pretty easy to understand. Throughout the COVID-19 pandemic, many people have been stuck at home, and they've been increasingly willing to spend money to make their homes as comfortable as possible. 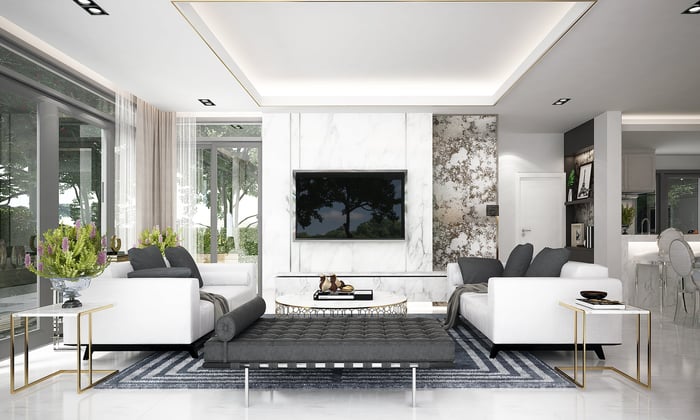 That might make you think that as the pandemic draws to a close, those who are now suddenly free to travel again might stop spending on the luxury home furnishings and other goods in which Williams-Sonoma and RH specialize. However, the high-end shoppers who flock to those two luxury retailers often have multiple homes, and being able to travel among them more freely could inspire them to spend even more in total.

In addition, new stimulus money is flooding into Americans' pockets, and those who can afford to spend it on discretionary consumer products like home furnishings have shown their willingness to do so. Not only will affluent customers keep going to RH and Williams-Sonoma, but aspiring upper-middle income earners who want to treat themselves after a long financial struggle could feed demand as well.

Thursday's huge 18% gains for Williams-Sonoma came in the wake of the retailer's fourth-quarter financial report. Total revenue climbed 24% from the year-ago period, with comparable brand revenue coming in at 25.7%. Performance was very consistent across all of Williams-Sonoma's brands, including Pottery Barn, West Elm, and the namesake Williams-Sonoma stores. E-commerce was a huge boost for the company, as comps in that realm were up nearly 48% year over year.

Williams-Sonoma also announced several favorable initiatives. It boosted its quarterly dividend by 11%, and it authorized a new stock buyback program for $1 billion. In the long run, Williams-Sonoma believes it can get to $10 billion in revenue within the next five years.

RH's gain of 2% was largely in sympathy with Williams-Sonoma. RH will offer its own look at its holiday season when it reports its financial results next Wednesday, but investors are optimistic they'll see the same trends there.

Signs of a recovery

Some investors are frustrated with how the tech sector is performing. If you're one of them and you don't have exposure to other industries that are poised to do well in a recovery, consider companies like Williams-Sonoma and RH. Diversifying into solid companies with good prospects is often the best move you can make.

Why Lorillard and Williams-Sonoma Jumped Along With the Dow

Krispy Kreme and Williams-Sonoma Pop After Hours, but Vail Skids