The tech company is shelling out big bucks for an exclusive streaming deal through 2033.

Retailer and giant tech company Amazon Inc. (AMZN -3.21%) landed an exclusive partnership with the National Football League, or NFL, today for streaming Thursday night games. The contract starts two years from now and will continue for 11 years, ending in 2033. According to a CNBC report, Amazon is paying approximately $1 billion annually for the arrangement.

The NFL's Thursday Night Football program will now appear exclusively on Amazon Prime Video starting in 2023, making this the first exclusive deal of its kind between a sports organization and a streaming service. Amazon will be the only place viewers can watch one pre-season game and 15 Thursday games each year while the partnership continues. Prime Video is also planning to stream newly made halftime, pre-game, and post-game shows, according to a late afternoon press release from the tech titan. 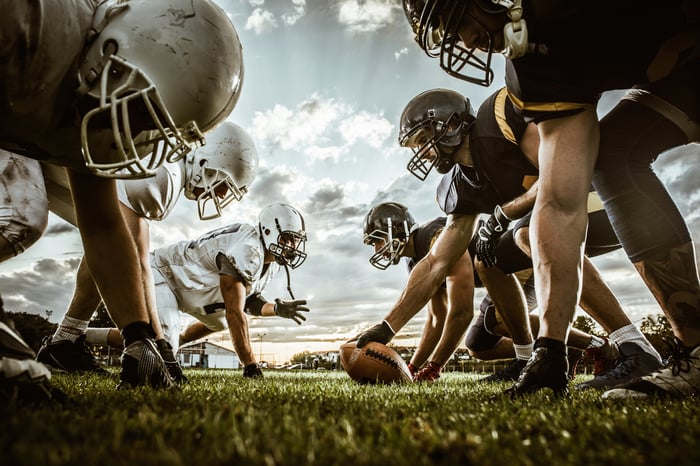 Prime Video SVP Mike Hopkins notes, "NFL games are the most watched live programming in the United States." The NFL first began broadcasting some of its Thursday Night games through Amazon in 2017, though the deal wasn't exclusive at that point. A single Amazon-exclusive game was streamed on Video last year.

In an NFL press release today, the organization noted Amazon is just one among a number of broadcasters who secured 11-year partnerships today. Various networks obtained access to different parts of the NFL's programming, with the NFL Network keeping an unspecified lineup of exclusive content for itself. In total, the agreements add up to a record-setting value of $100 billion, CNBC reports.

Amazon continues to branch out into new service areas with the NFL Thursday Night Football deal, using its windfall of COVID-19 cash to expand in all directions. Its Prime Video viewership roughly doubled in 2020 to 150 million viewers.