Please ensure Javascript is enabled for purposes of website accessibility
Log In Help Join The Motley Fool
Free Article Join Over 1 Million Premium Members And Get More In-Depth Stock Guidance and Research
By Adria Cimino - Mar 18, 2021 at 6:00AM

And it could mean at least another $1 billion in revenue for the biotech.

Moderna (MRNA 8.73%) may already seem like a market leader. The biotech company's COVID-19 vaccine was only the second to earn an emergency use authorization (EUA) from the Food and Drug Administration, shortly after Pfizer and partner BioNTech garnered one for BNT162b2. In the months since, the U.S. has administered more than 54 million doses of the Moderna vaccine alone. And the Biden administration signed additional deals to buy enough Moderna and Pfizer doses to vaccinate the entire U.S. population.

But these companies are not yet able to cater to the whole potential market. The FDA has only authorized their vaccines -- and the recently approved Johnson & Johnson inoculation -- for use in adults.

This week, however, Moderna became the first to launch a COVID-19 vaccine trial in children ages 6 months through 11 years old. And its speed here might give it a sales edge. 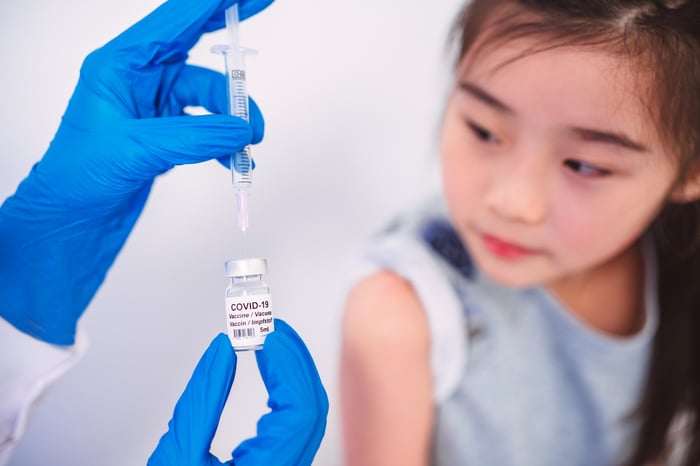 The FDA granted the Moderna and Johnson & Johnson vaccines EUAs for people 18 and older, but authorized Pfizer's vaccine for those 16 and older. That's because Pfizer presented satisfactory trial data on participants in that slightly wider age range.

Now, Moderna and Pfizer both are already studying their vaccines in teens. Both recently said their teen trials are fully enrolled. Moderna earlier said it's targeting a data readout this spring and vaccine deployment in time for autumn's back-to-school period. We might expect both companies to vie for this market at about the same time. Johnson & Johnson hasn't yet launched trials in the under-18 population. But it plans to do so, according to a USA Today report.

When it comes to vaccinating an even younger population, it's clear Moderna has taken the lead from a timeline perspective. The biotech expects to vaccinate 6,750 healthy participants in the U.S. and Canada in its phase 2/3 pediatric study. The trial includes two parts. In part one, researchers will give participants ages 2 through 11 one of two possible doses of mRNA-1273, while those who are younger will receive one of three possible doses. The data gleaned from that phase will determine the dosage to be used in the second part of the trial, which will include a vaccine group and a control group that will receive placebos.

Moderna has not said how quickly it expects the study to generate results. But if all goes smoothly, mRNA-1273 may be available to the pediatric market ahead of rivals. Being first to market almost always confers an advantage. If doctors and their patients are satisfied with the earliest arrival's safety profile and efficacy, they're likely to stick with it.

What does this mean for Moderna's revenue?

Let's do a little math. About 15% of the U.S. population is under 12, according to National Kids Count data. That's more than 48 million individuals. Using the price the federal government paid Moderna for its mRNA-1273 doses and considering a two-dose regimen, we can make a sales estimate. At $15 per dose for about 100 million doses to vaccinate children, Moderna would generate $1.5 billion in revenue in the U.S. market alone. And there's certainly room for it to grow revenue further by meeting the vaccine needs of younger populations in foreign markets.

Though severe cases of COVID-19 are relatively rare in children, vaccinating the younger set will nonetheless be a key step in stemming the spread of coronavirus and ending the pandemic. It's not entirely clear yet the degree to which vaccination reduces the transmission of the virus by those who become infected despite having been inoculated. But fewer symptomatic infections may reduce viral shedding into the environment, which means fewer people would be exposed to COVID-19.

Will Moderna be the first company able to vaccinate across all age groups? Clinical trial data will answer that question. But if it doesn't encounter any surprises, Moderna could win this stage of the race, giving it a leg up on its rivals.

Of course, in this case, issues of supply and demand mean that such dominance can only take a company so far. Moderna's capacity to produce mRNA-1273 this year is expected to be between 700 million and 1 billion doses. That's not enough to vaccinate the whole world. It will take many companies to complete the task. So Pfizer, Johnson & Johnson, and other vaccine makers all stand to benefit.

What this clinical trial news does mean is that Moderna investors have one more reason to be optimistic about the biotech company -- and its ability to increase its revenue over the long term.