Please ensure Javascript is enabled for purposes of website accessibility
Log In Help Join The Motley Fool
Free Article Join Over 1 Million Premium Members And Get More In-Depth Stock Guidance and Research
By Rich Duprey - Mar 19, 2021 at 6:14AM

Sometimes it makes sense to follow the smart money; other times it's just dumb.

Billionaire bond king Bill Gross made $10 million shorting GameStop (GME 29.19%) stock during the recent trading frenzy, but he isn't done getting his quarter's worth out of the ride.

While acknowledging that the volatility in the video game retailer's stock is substantial, Gross says he can earn millions more by continuing to short its shares, and "like a good Robinhood trader," he is selling call options.

Because the fundamentals of GameStop's business don't seem to support its current price level, it looks like Gross is betting the right way, but does that mean you should follow his lead? Small retail investors are very different from billionaire bond traders, so let's take a closer look. 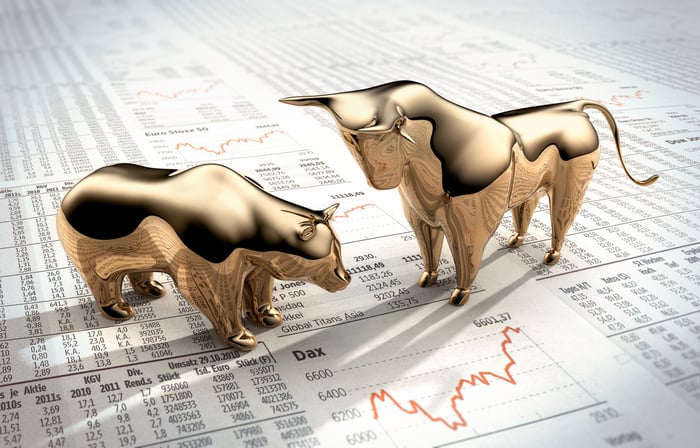 A real chance for change

After being bearish about GameStop's potential in a dramatically changing video game market, I've come to believe there is a future for the retailer.

GameStop still has a strong, valuable brand in the gaming community, it's currently profiting off the video game console upgrade cycle, and it has activist investors on its board who were just appointed to a new committee to oversee a transformation of the company to meet the challenges of the digital gaming age.

Yet a belief in its future prospects doesn't come at the expense of valuation, and at $200 a share, GameStop looks like a very overpriced stock to me.

So does that mean I agree with Gross and think investors should short the stock? No. As the recent Reddit rally shenanigans showed, there's a lot of truth in the investing adage, "The markets can remain irrational longer than you can remain solvent."

The patience to hold on

Gross, while not unique, is a rarity nonetheless because few investors can sustain the kind of losses he had to just to make his $10 million gain. He said at one point he even lost $10 million by being short when GameStop's shares soared to $400 a piece. But having very deep pockets made it easier to weather the steep hit he took allowing him to go back and try again.

When an investor goes long a stock, their losses can only be as much as they invested. While that can still be bitterly painful if you invest like a roulette player betting it all the ball will land on black, at least you know what your limit is.

When you short a stock, though, your losses can be limitless. As long as the stock keeps rising, your losses will keep mounting until you are left destitute.

During the so-called "gamma squeeze" on GameStop's stock, short-sellers lost billions of dollars cumulatively because they overplayed their hand. They sold more shares short than there were in circulation, and when GameStop bulls bought the shares or stock options (which caused the market makers to buy the underlying stock), there were few if any shares left for short-sellers to cover their position.

As GameStop's stock rose and rose and rose -- surging some 1,800% from trough to peak -- short-sellers had to mostly sit there and take it. They only got bailed out when brokerages banded together to prohibit buying any more GameStop shares and only allowed investors to sell their stock, causing the shares to fall. That's when Gross made his multimillion-dollar profit. But who knows? Short-sellers could still be bleeding today had the rampaging bulls not been blocked.

GameStop wasn't the only stock benefiting from the mania. AMC Entertainment Holdings, Bed Bath & Beyond, and Nokia were among those that saw their shares soar to varying degrees as short-sellers got their comeuppance.

Gross and other billionaires still had to lick their wounds, but they were able to come back and play another day. That's probably not you (and if it is, kudos for amassing such a nest egg).

So, no, don't follow Bill Gross and short GameStop stock. But I wouldn't go buying it, either. While the video game retailer can remain relevant to the future of gaming, it still needs to prove it can get there. That makes for an interesting discussion around $20 or $30 per share, but not when the stock is trading orders of magnitude higher than that.